Is Africa a victim of bias by international investors? | Business | Economy and finance news from a German perspective | DW | 14.08.2020

African leaders are flagging "unjustifiably" high borrowing rates charged by global investors. International organizations such as the IMF and the World Bank are equally complicit in perpetrating the bias, experts say. 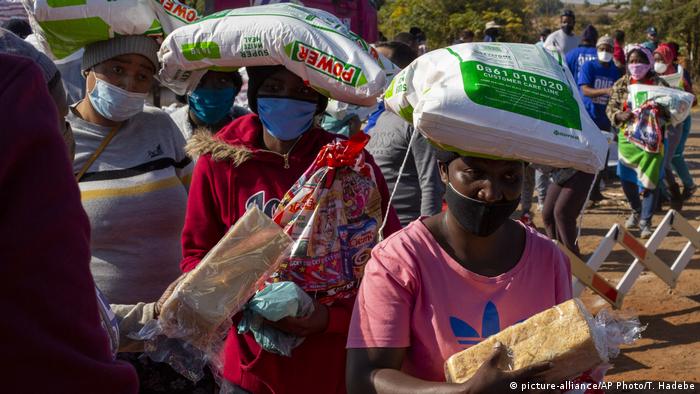 The economic blow dealt by the coronavirus pandemic has reignited a sentiment that Africans have shared for years: Their growth is inhibited by widespread discrimination by the international investor community.

As the virus batters the continent's economy and throws government budgets into chaos, the spotlight has shifted onto the exorbitant amounts of money that African nations spend on debt repayments even as large creditors like China, the International Monetary Fund (IMF), and the G-20 nations offer debt relief to deal with the current predicament.

African countries on average spend more on interest payments than on doctors and clinics at home, with Ghana spending five times its health care budget on servicing debt. Africa's top oil producer, Nigeria, which is reeling from a crash in oil prices, could only manage to collect revenue equal to its debt-servicing costs in the first quarter.

Amid the economic pain, African leaders and experts are flagging the "unfair" risk premium put on African countries — which results in them having to pay more for debt than other emerging nations — as an unnecessary burden. They say the risk premium is rooted in bias and is often based on a misplaced presumption of risk by international investors.

"When you look at the risk premium put on African countries you just question, why," Ken Ofori-Atta, Ghana's finance minister, told Bloomberg in July. "There is no basis for us borrowing at 6%, 7%, or 8% while other countries borrow at cheaper rates."

Africa has its problems: conflicts, political instability and rampant corruption in certain countries, lack of infrastructure, and stifling bureaucracy and regulations. But experts say that even if one accounts for all these factors, a 2.9% risk premium, as was revealed by a 2015 report, is unjustified.

They cite the example of Argentina to stress their point. The Latin American country, which has reneged on its debt on nine occasions, issued a 100-year bond in 2017 with a coupon of 7%, which to the surprise of many was oversubscribed. By comparison, Angola hasn't defaulted since the end of its civil war in 2002 and yet is charged a higher rate of over 9% that too for much shorter-dated bonds.

"If this is a country [Argentina] with a history of defaulting on its loans, this is a country that's at junk status and is still capable of issuing $2 billion in debt that's oversubscribed up to $9 billion, and they don't have to pay back for 100 years. So, what exactly is the risk that is being built into the model when it comes to the African countries," said Gyude Moore, a senior policy fellow at the Center for Global Development and former minister of public works in Liberia.

African economic powerhouse South Africa is also a victim of this alleged bias. The country is charged higher rates by bondholders than say a Brazil, which is assigned a similar credit score by S&P Global Ratings. Similarly, Kenya pays more for a 10-year dollar debt than similarly rated Bolivia.

Mma Amara Ekeruche, a research associate at the Center for the Study of the Economies of Africa (CSEA), says this discrimination was one of the factors pushing African nations to borrow from China, which offers better rates than private creditors and lays down less stringent conditions than multilateral institutions like the IMF.

One reason that experts give to justify this disparity is that the continent has a limited credit history and that too is checkered with credit reliefs, renegotiations and debt restructuring.

"Even though the entire world was hit by the virus, it's only African countries that have come out to say that they can't pay their debts," Ekeruche told DW. "It just speaks to their sentiments. Investors feel that the African countries are susceptible to asking for debt restructuring or defaulting on debts or asking for more favorable terms."

The wrongful diversion of debt — often raised to finance infrastructure projects — to instead balance budgets and support currencies is another obvious red flag for risk. The IMF says in only one in four cases did they see the debt that was contracted was used for infrastructure.

Charles Robertson, the global chief economist at Renaissance Capital, says there is no "obvious" discrimination against African borrowers and cites the example of Morocco, which can borrow extremely cheaply. He attributes the low rate of domestic savings for high local borrowing costs in sub-Saharan Africa.

He argues that some sub-Saharan countries in fact borrow at lower rates than they should as implied by their credit ratings because they help global investors diversify their loan book.

Moore rejects the savings argument, pointing that Angola's savings as a proportion of GDP were higher than that of Argentina. He blames credit rating agencies' "unfamiliarity" with the region as a key reason for the risk premium.

"The three rating agencies will at best have an office in South Africa that is responsible for the entire continent. So how much do they know," he told DW. "But there's a Fitch office for Mexico. There's one for Brazil. There's one for Chile."

The presumption of risk also emanates from a lack of credible information and data that investors in the West have about Africa, often prompting them to paint the entire continent with the same brush.

Chinese in Zambia: Tension with the new arrivals

Ekeruche from CSEA blames a lack of representation of Africans in key decision-making roles in global financial institutions for the problem and goes to bat for a more inclusive governance framework.

Moore, however, stresses that lack of representation is not the issue, but it's the general perception of the continent in those institutions. He points out that a current deputy managing director of the IMF is a former Liberian finance minister and that the World Bank always has vice presidents for the region.

"It's not just the country of origin, it's the mindset of the institution. So, you can have African economies at the World Bank. If you think in the World Bank's mindset, then it doesn't matter if it's African or not," he said. "In these organizations, there is no reward for going against the grain. So, people working within those institutions are beginning to think and write in the way that the institutions think."

He says the IMF, which has far more access to African books than the rating agencies, is part of the problem. In December last year, the IMF warned that 40% of African nations were at moderate or high risk of distress. This after the continent raised $55 billion in international markets in the past two years, taking advantage of record commodity prices and yield-hunting investors in an ultralow interest rate environment. Some African analysts dismissed the IMF's concerns, citing the continent's relatively low debt levels. The debt-to-GDP ratio in most African countries is below the IMF's suggested 55% threshold.

"We have assigned way more responsibility to the rating agencies than we have to the IMF. The IMF ranks African governments in terms of the risks of debt distress and that ranking because of the access they have to our books plays a very big role in the decisions of rating agencies," Moore said.

"The data coming from the IMF strengthens the bias that already exists within the rating agencies."

Moore says African nations need to work in unison to expose the bias and call on international institutions, rating agencies and bond contractors to explain the rationale behind high risk premium.

"There ought to be an African push to be able to clarify the ratings and the costs of this. What is responsible for driving the premium on African debt? Because it can't simply be governance. It can't simply be lack of data."

Africa's debt crises not the fault of creditors alone

G8 countries cancelled the debts of 18 African countries in 2005. But many of these countries now face bankruptcy again. Is China really to blame, as many in the West believe?

Tokyo has announced an ambitious multibillion-dollar program of economic assistance to Africa, in a bid to counter Beijing's growing economic and political influence.