Host nation Egypt made it three wins out of three in Group A, beating Uganda who finised as group runners up. Elsewhere, Madagascar caused the biggest upset of the tournament so far by beating Nigeria to top Group B 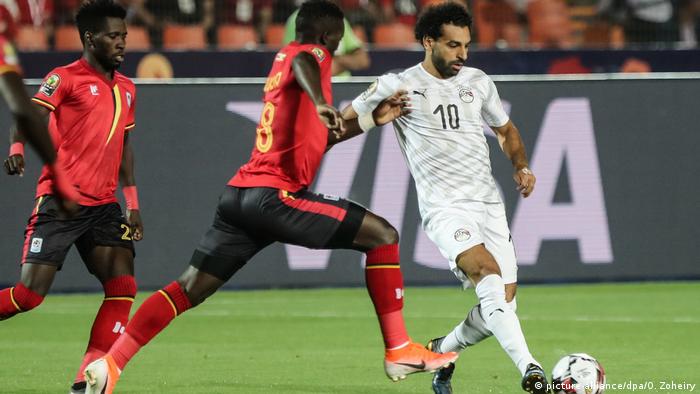 Mohamed Salah got his name on the scoresheet once again as Egypt cruised in the knockout stages with a perfect record of three wins out of three in Group A with a 2-0 win over Uganda.

The Liverpool star curled in a free kick, his second goal of this year's Africa Cup of Nations, to pave the way to victory on Sunday before Ahmed Elmohamady double their lead before the break as they topped their group.

Uganda had promising spells throughout the game without finding the cutting edge in front of goal, but have booked their place in the Round of 16 despite the defeat after finishing a point above the Democratic Republic of Congo.

The Democratic Republic of Congo gave themselves a lifeline in their bid to reach the knockout stages of the 2019 Africa Cup of Nations after securing a resounding 4-0 win over Zimbabwe in their final group game.

The victory at the 30 June Stadium in Cairo was the biggest of the tournament so far. Jonathan Bolingi punished a blunder by goalkeeper Elvis Chipezeze to head the Congolese Leopards in front on four minutes and Cedric Bakambu added a second before half-time.

Bakambu netted again midway through the second half and Britt Assombalonga added a fourth. The Congolese will find out on Tuesday night whether they are among the best four third-place finishers and remain in the competition.

African Cup of Nations debutants Madagascar shocked Nigeria in Alexandria to qualify for the last-16 as winners of Group B.

Lalaina Nomenjanahary and Carolus Andriamatsinoro scored the goals for the Madagascans either side of half-time against German coach Gernot Rohr's Super Eagles, who had already sealed qualification for the knock-out rounds.

But Nigeria, ranked 45th in the world, were still expected to beat Madagascar, the island nation ranked 108th - behind the likes of Haiti, Vietnam and the Faroe Islands.

Unfortunately for Madagascar, arguably the biggest upset of the tournament was marred by a worrying injury to Pascal Razakanantenaina, the defender being carried off on a stretcher after what appeared to be an innocuous clash.

Madagascar will now face a third-placed team in the last-16, while Nigeria must reckon with the second-placed team from Group F, which could be Ghana.

Guinea beat ten-man Burundi 2-0 to finish third in Group B, giving them a chance of progressing as one of best third-placed teams.

Liverpool midfielder Naby Keita remained on the bench for the National Elephants, who nevertheless ran out comfortable winners thanks to a Mohamed Yattara double.

Christophe Nduwarugira was sent off for Burundi after 12 minutes after committing a desperate foul as the last man.

Results elsewhere will determine whether Guinea advance or not.

Not many athletes from Africa take part in the Winter Olympic Games. But this year in Beijing, six Olympians from five African nations will represent the continent, and they are not just there to make up the numbers.

A month after sacking their former coach and losing key players, the Super Eagles are hoping to make a point about the depth of their game as they bid to win in the home of one of their biggest continental rivals