The Taliban has made face veils mandatory for all Afghan women appearing in public, including those on television. This edict was ignored by presenters on Saturday, but they relented a day later. 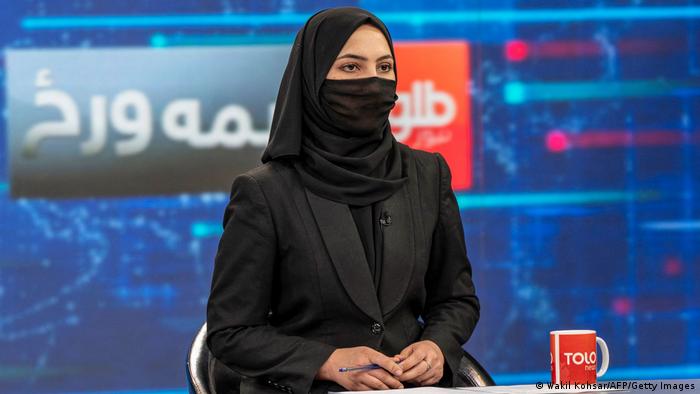 All female television presenters and reporters in Afghanistan obeyed a Taliban order to wear face coverings on Sunday, just one day after flouting the edict.

Broadcasters had hoped their united front on Saturday would convince Taliban authorities to reverse the order, but the hard-liners insisted it was final and not up for discussion.

The Information and Culture Ministry said the policy was "final and non-negotiable."

Sonia Niazi, a TV anchor with TOLOnews,  expressed her frustration with the edict.

"It is just an outside culture imposed on us forcing us to wear a mask and that can create a problem for us while presenting our programs,'' she said.

"We are in a deep grief today," TOLOnews chief editor Khpolwak Safi wrote on Facebook.

Safi shared an image in which male journalists at the news channel covered their faces with black face masks in solidarity with their female colleagues.

"I can't breathe nor talk properly. How will I be able to run the program?" said Khatira Ahmadi, a female presenter at TOLOnews.

Addressing the policy during a live production, Basira Joya, a female host at Ariana News, said Islam has not imposed anything on anyone by force.

"We are fighting and continuing our work, even in a burqa. Nothing can stop us," she said, while squeezing her throat.

TOLOnews director Lotfullah Najafizada posted an image on Twitter of a presenter with her face covered, saying: "Never imagined this day!"

During the Taliban's last stretch in power, from 1996-2001, the Islamic fundamentalist group imposed an array of restrictions on women, requiring them to wear the all-encompassing burqa and barring them from public life and education.

After they seized power again last August, the hard-line government's previous stance appeared to have softened after they announced no dress code for women. But they have made a U-turn on the policy in recent weeks, confirming the worst fears of rights activists and further complicating the Taliban's relations with the international community.

Since the Taliban returned to power, the group has also imposed severe restrictions on media outlets and clamped down on human rights.

Journalists have been beaten and detained over their work. Girls and women have been deprived of many of their rights, including education, work and movement.