The US is under pressure to extend its deadline for evacuating thousands of people from Afghanistan. But the Taliban warned there would be "consequences." 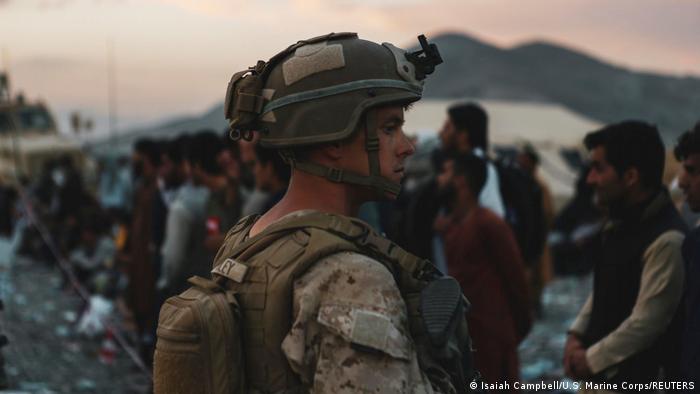 A Taliban spokesperson on Monday said the group would not agree to an extension of the presence of international forces in Afghanistan.

The Islamist militant group seized power in Afghanistan just two weeks before an August 31 deadline for foreign troops to withdraw from the country.

Western countries have since scrambled to get their citizens and local personnel out of Afghanistan, and discussions about keeping US forces on the ground past this date are underway.

Taliban spokesman Suhail Shaheen warned there would be "consequences" if foreign troops stay after August 31, saying it would be an "extended occupation."

"If the US or UK were to seek additional time to continue evacuations — the answer is no. Or there would be consequences," Shaheen told British broadcaster Sky News on Monday.

What is the European stance?

The British government said Prime Minister Boris Johnson would request an extension to the US troops' mandate at an emergency G7 summit on Tuesday.

Britain's Minister for the Armed Forces James Heappey, however, told Sky News that "this is not just a discussion that happens between G7 leaders tomorrow, it is a discussion which happens with the Taliban."

MEP McAllister: 'EU needs to focus on evacuations' out of Afghanistan

German Foreign Minister Heiko Maas said he was discussing with NATO allies and the Taliban keeping the Kabul airport open beyond the deadline.

On Saturday, EU foreign policy chief Josep Borrell said it was "mathematically impossible" to evacuate tens of thousands of Afghan staff and their families before the deadline.

What about the US?

Biden has not ruled out extending the airlift beyond August 31, but said he hopes it would not be necessary.

Speaking at the White House on Sunday, Biden said talks were underway.

The US has airlifted 37,000 people from Afghanistan since the Taliban takeover, officials said.

Biden acknowledged the tragic scenes at the Kabul airport, but said they were the cost of departure.

Biden: This is one of the most difficult airlifts in history

"There is no way to evacuate this many people without pain and loss and heartbreaking images you see," Biden said.

With the troop withdrawal, the US is ending its 20-year presence in Afghanistan. Former US President Donald Trump's administration had struck a deal with the Taliban last year to end the war.