Afghanistan: Taliban close in on Kabul — as it happened

The Taliban insisted they do not want "a state of war" in the Afghan capital, the last major city held by government forces. Follow DW for the latest. 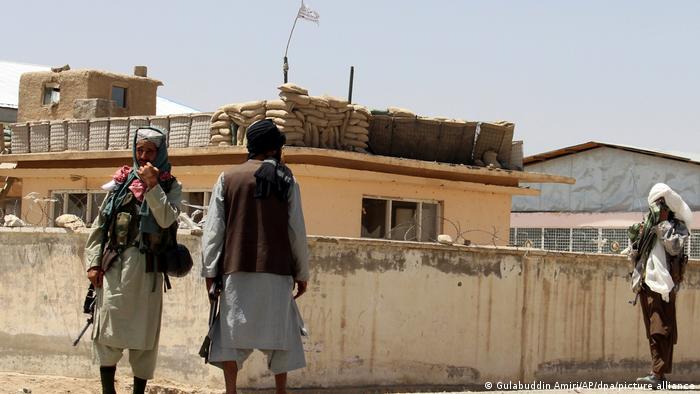 This article was last updated at 08:10 UTC/GMT.

The Taliban, started entering the outskirts of Kabul on Sunday, local officials said. For more on this, click here.

No decision on Kabul, say Taliban

The Taliban militant group say they are still undecided on whether to seize Kabul.

"A separate decision will be taken later about Kabul," the insurgent group's spokesman Zabihullah Mujahid told the dpa news agency.

"People should be assured that we don't want a state of war in Kabul or, God forbid, anyone to be harmed," he said.

The United States has started evacuating diplomats from its embassy in Kabul, two US officials told the Reuters news agency on Sunday.

"We have a small batch of people leaving now as we speak, a majority of the staff are ready to leave...the embassy continues to function," one US official was quoted as saying by Reuters. 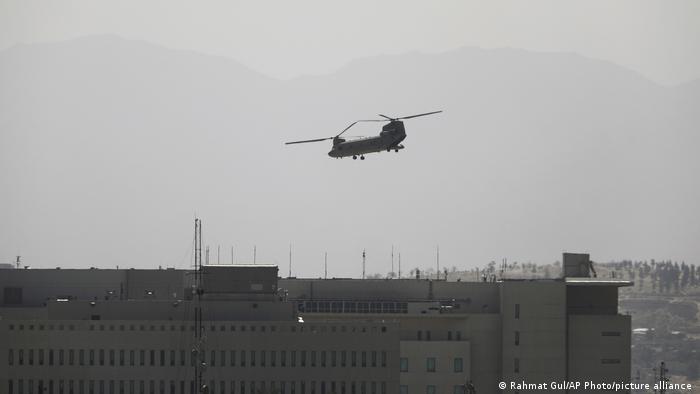 The evacuation of US diplomatic staff began earlier on Sunday

Helicopters were seen landing at the diplomatic compound later on Sunday.

US President Joe Biden announced late on Saturday that 5,000 American troops would ensure "a safe and orderly drawdown."

It comes as the Taliban close in on the capital, Kabul.

Uzbekistan says it has detained 84 Afghan soldiers who crossed its border on Saturday.

The Tashkent government said another group of troops are waiting near a checkpoint on the Afghan side of the frontier between the two countries.

Officials are providing humanitarian aid to the soldiers, who are positioned close to the Termez-Khairaton bridge.

Members of Afghanistan's military escaped into Uzbekistan and Tajikistan last month when retreating from a Taliban advance.

Talks are being held between both countries to return the 84 troops to Afghanistan.

Provincial capitals fell to the Taliban in less than ten days

The Taliban have seized Jalalabad, the capital of the eastern province of Nangarhar, on Sunday morning, according to local officials. The city was reportedly given up without resistance.

Afghan lawmaker Abrarullah Murad told AP news agency that elders in the city negotiated with the Taliban for the government to leave.

"We woke up this morning to the Taliban white flags all over the city. They entered without fighting," Jalalabad resident Ahmad Wali told news agency AFP.

Photos on social media show members of the Taliban sitting in the governor's office in Jalalabad.

Jalalabad had a population of around 356,000 people as of 2014. The city is around 65 kilometers (40 miles) from the Pakistani Torkham border crossing, making it a center for international trade.

Kabul is now the only major city in Afghanistan controlled by the government. Jalalabad's capture effectively cuts off Kabul to the east.

Omar Samad, a former Afghan ambassador to France and Canada, told DW Saturday that President Ashraf Ghani's resignation could lead to an interim government, which he said could possibly avert a Taliban attack on Kabul.

"Apparently, the president is not still ready to step down in order to pave the way for an interim government, a transitional period for Afghanistan that would probably save Kabul from any type of attack,"  Samad said.

"The Taliban don't seem to want to attack, from what we hear ... they might use other means, other cities fell with almost no shooting going on, very few casualties. Kabul is going to be different," he added.

"The international community needs to still be committed to Afghanistan, especially on the humanitarian side, from now on," he said of the global response to the situation.

Is the Afghan capital likely to fall?

US President Joe Biden announced Saturday he will deploy 5,000 troops "to make sure we can have an orderly and safe drawdown" and "an orderly and safe evacuation of Afghans who helped our troops" as well as "those at special risk from the Taliban advance."

He added, "One more year, or five more years, of US military presence would not have made a difference if the Afghan military cannot or will not hold its own country. And an endless American presence in the middle of another country’s civil conflict was not acceptable to me."

Biden concluded, "I would not, and will not, pass this war onto a fifth" US president.

US Secretary of State Antony Blinken spoke Saturday with Afghan President Ashraf Ghani regarding the "urgency of ongoing diplomatic and political efforts to reduce the violence," a State Department statement read.

The capture of the key northern city is another major setback for the Afghan government. Meanwhile, Taliban forces have reportedly reached the outskirts of Kabul, as embassies prepare to evacuate staff.