The blaze caused an electricity outage, leaving much of the Afghan capital in darkness. The Interior Ministry said one fuel tanker caught alight before the fire then spread to dozens of others parked nearby. 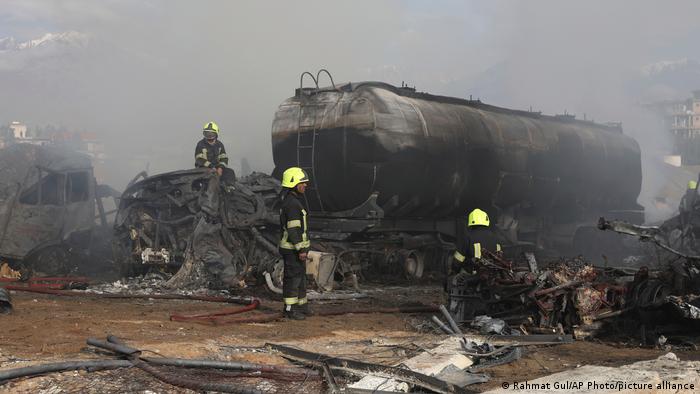 It wasn't immediately known if the fire was intentional or not, coming as the formal withdrawal of the remaining US and NATO troops in Afghanistan gets underway.

The injured were all taken to hospitals, though some have already been discharged, Arian added.

As smoke engulfed the Afghan capital, many residents lost power from the incident as much of the city was plunged into darkness.

It appeared that one fuel tanker caught fire before the blaze spread to others parked nearby, according to Arian. 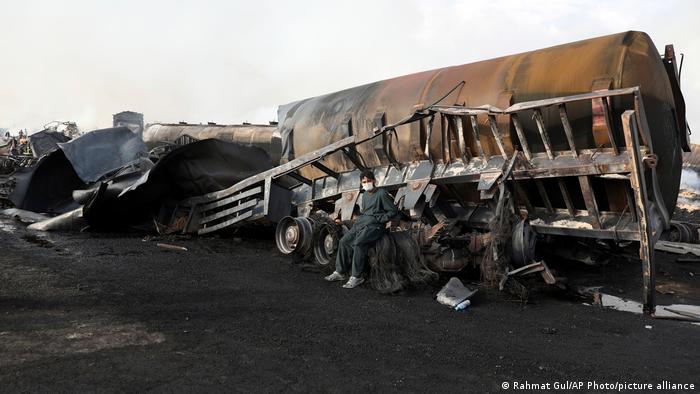 A man sits on a burnt out fuel tanker after a fire soared through Kabul late Saturday night.

"We are working to find out the cause of the fire," Arian said. "At this stage, we can only say that the spark started from a fuel tanker and spread to others."

All 2,500-3,500 US soldiers and some 7,000 NATO allied forces will have left Afghanistan by September 11 — exactly 20 years after the terrorist attacks in the United States that sparked the military deployment.

In mid-February, a massive fire occurred on the border between Afghanistan and Iran. Hundreds of trucks and containers were ablaze after a fuel truck exploded. At least 17 people were wounded in the incident.

The massive blast hit a guest house as people were breaking their fast during Ramadan. High school students are reportedly among the casualties.

US exit from Afghanistan: Leaving local staff at Taliban's mercy

NATO's in-country employees tell DW they could be targeted by the Taliban after foreign troops withdraw from Afghanistan. Militants consider the alliance's Afghan employees "traitors" for working for occupying forces.

Afghanistan: Does US exit offer Russia a chance to fill power vacuum?

The US departure from Afghanistan will pave the way for regional powers to increase their clout in the war-ravaged country. Moscow has its own interests in Afghanistan, but will it cooperate with Washington?