Afghanistan has assumed full responsibility for security from foreign combat troops departing after a 13-year military mission. The handover comes after a mortar bomb killed at least 20 civilians in the country's south. 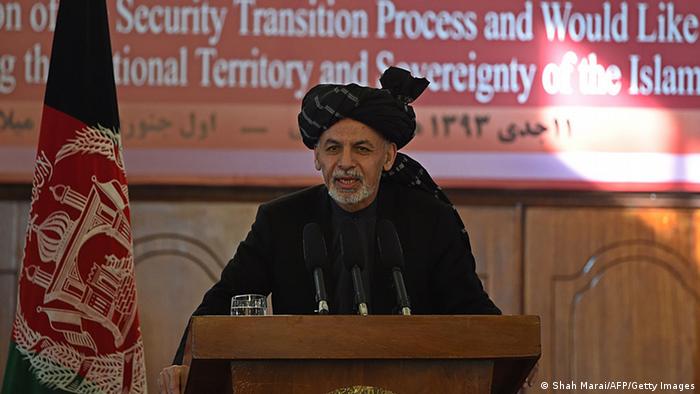 Afghan President Ashraf Ghani marked the formal transition on Thursday during a speech at the Presidential Palace in Kabul.

"I want to congratulate my people today that Afghan forces are now able to take full security responsibility in protecting their country's soil and sovereignty," Ghani said.

"In the past 13 years, due to the problems in the region and the world, this security was a joint responsibility. Now it belongs only to Afghans. But we are not alone, we have our allies, we will continue to work together."

The New Year marked the official end of NATO combat operations in Afghanistan, and means some 350,000 Afghan forces will now be responsible for fighting a Taliban insurgency that has become increasingly organized in carrying out attacks.

About 13,000 foreign soldiers, most of them from the United States, will still be deployed in the country to train and advise Afghan national security forces under a new mission called Resolute Support.

The handover comes as Afghan police investigate an apparent army rocket strike at a wedding that killed at least 20 people and injured dozens more late Wednesday.

It's believed the rocket was fired during fighting between Taliban insurgents and the army in the district of Sangin in the country's southern Helmand province. Sangin is a Taliban stronghold and has been the scene of intense fighting over the past six months since US forces withdrew from the area.

"What we know so far is that our soldiers fired mortar rounds from three outposts but we do not know whether it was intentional," General Mahmoud, the deputy Commander of the Afghan 215 corps in the province, told news agency Reuters.

"We have launched our investigation and will punish those who did this."

Afghanistan experienced a surge in violence in the leadup to the withdrawal of NATO troops.

According to the United Nations, more than 3,180 civilians were killed and nearly 6,430 injured as of the end of November 2014, making it the deadliest year on record for non-combatants. The bulk of those casualties were killed in Taliban attacks or during ground battles between insurgents and Afghan forces.