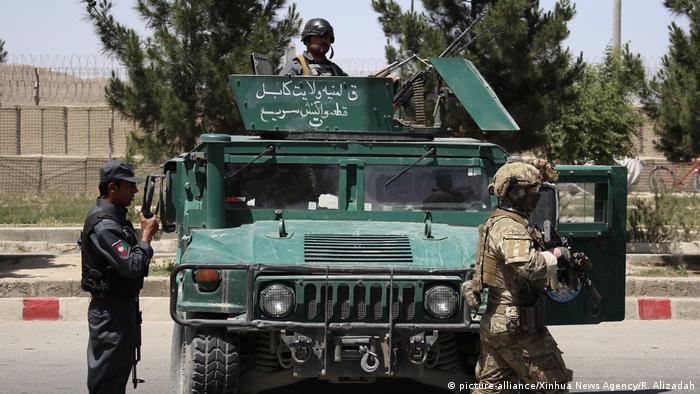 The Afghan government said Thursday that its security forces would stop all "offensive maneuvers" against Taliban insurgents until June 20.

The ceasefire will last "from the 27th of Ramadan until the fifth day of Eid-al-Fitr," the holiday that caps off the Muslim fasting month of Ramadan, President Ashraf Ghani tweeted from an official account.

He said that the suspension of operations would include only Taliban fighters and that security forces would continue to fight "Islamic State" (IS) militants, al-Qaida and "other international terrorist networks."

The ceasefire would give the Taliban time to reflect on the negative consequences of their "violent campaign," Ghani said.

"With the ceasefire announcement, we epitomize the strength of the Afghan government and the will of the people for a peaceful resolution to the Afghan conflict," he added.

"I think the Afghan government wants to send a message to the world, as well as the Taliban, that it is prepared to do whatever it takes to end the conflict in Afghanistan," Matiullah Kharotai, a Kabul-based analyst, told DW.

US forces in Afghanistan confirmed Thursday they would honor Kabul's ceasefire with the Taliban.

"We will adhere to the wishes of Afghanistan for the country to enjoy a peaceful end to the Islamic holy month of Ramadan, and support the search for an end to the conflict," said General John Nicholson, the US commander of NATO forces in Afghanistan.

The ceasefire announcement comes after top Afghan clerics declared on Monday that suicide bombings went against Islam and that the violence and war in Afghanistan were also contrary to Islamic law.

In February, Ghani offered eventual political recognition to the radical Islamist Taliban as the starting point for a process that he said could lead to talks to end more than 16 years of war.

"Recent peace initiatives, including meetings of religious scholars in Indonesia and Kabul, indicate that the Afghan government and its international backers want to end the protracted Afghan conflict at any cost," Wahid Muzhdah, a Kabul-based security expert, told DW.

"But becoming part of any government-backed peace initiative for the Taliban is unlikely at this stage, as this could push their fighters to other militant groups like 'Islamic State,'" Muzhdah added

The militants, who are seeking to reimpose strict Islamic law in the country after being ousted as rulers in 2001 in a US-led invasion, have so far made no official reply to the offer. Instead, they announced their annual offensive in late April, in the course of which attacks on security forces, district centers and provincial capitals have increased.

The Taliban accuse the Afghan government of being a mere puppet of the US.

"The Taliban will only engage in peace talks if foreign troops announce the date of their complete withdrawal from Afghanistan," said Muzhdah.

The militants have a presence in much of the country, and Afghan security forces are hard-pressed to contain the insurgency after NATO-led troops ended their combat mission in December 2014.

"It is time that all parties to the Afghan conflict enter peace talks because this war cannot be won in the battlefield," Younus Fakur, an Afghan analyst, told DW.