The final result of Afghanistan's presidential runoff faces a likely delay as ballots are recounted in one-third of the polling centers. Fraud allegations have marred the country's first democratic transition of power. 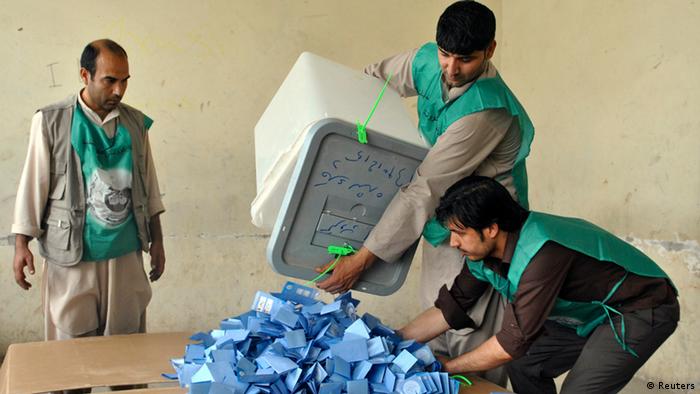 On Tuesday, Afghanistan's electoral commission announced that it would likely delay the preliminary result of last month's presidential runoff until the weekend at the earliest. The result was originally scheduled to be made public on Wednesday.

"The announcement of preliminary results is likely to be delayed until Saturday," election commissioner Sharifa Zurmati said. "Around 2,000 polling centers are to be recounted because of alleged fraud."

In June, Afghans defied Taliban violence to vote in a presidential runoff between former Foreign Minister Abdullah Abdullah and ex-World Bank official Ashraf Ghani. Ballots were cast at 6,000 polling stations across the country.

The Independent Election Commission (IEC) reported that 99.7 percent of the ballots had been logged into its database.

IEC chief Zia ul-Haq Amarkhail resigned his post last week after Abdullah's campaign released a phone conversation in which Amarkhail allegedly called for ballot boxes to be stuffed. Amarkhail claimed the recording was fake but said he was stepping down so that Abdullah would end his boycott of the vote.

Abdullah has accused Ghani, the election commission and incumbent President Hamid Karzai of stuffing ballot boxes. The former foreign minister and anti-Taliban resistance fighter made similar allegations in the 2009 presidential election, in which Karzai won a second term.

"The commission has lost its legitimacy for us, and the recount of 2,000 polling centers will not change anything for us," said Jawed Faisal, a spokesman for Abdullah's campaign.

Meanwhile, Ghani claims that the election was free and fair, calling on the commission to stick with its original timeline for the result. However, on Tuesday, his campaign announced that it would accept a delay.

"If this delay is for the sake of transparency, then we accept it, though it runs against the election law," campaign spokeswoman Azita Rafat told the AFP news agency.

Last week, the United Nations called on the candidates and their supporters to "refrain from any acts that incite imminent violence, disorder or lead to instability."

There's been concern that election tensions could result in violence. Ghani's supporters are largely Pashtuns while Abdullah's loyalists are primarily Tajiks and other ethnic groups from the north.

Abdullah won the first round of the election with 45 percent of the vote, against Ghani's 31.6 percent. However, the former foreign minister fell short of the 50 percent needed to avoid a runoff.

The final result of the runoff was originally slated for July 22, with the new president to be inaugurated on August 2.

After negotiating with the Taliban in Doha for the past 11 months, prominent Afghan women's rights activist Fatima Gailani says ousted President Ashraf Ghani is a "national traitor."

The ousted president of Afghanistan and his family are in the UAE after fleeing the Taliban advance on Kabul. His whereabouts had been uncertain since Sunday.