Despite the two Afghan presidential candidates officially agreeing to a US proposal to set up a national unity government, many questions are still unanswered and key issues remain in legally gray areas. 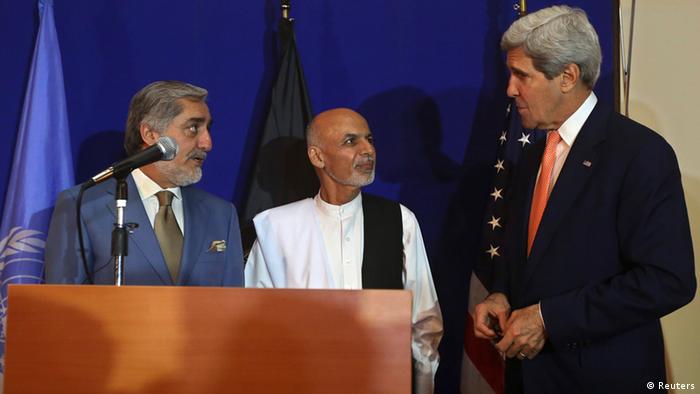 It has been almost ten months since eleven candidates registered to contest in Afghanistan's presidential election. But no successor to incumbent President Hamid Karzai has so far been found. Shortly after the June 14 runoff election, it became clear that the electoral process wouldn't bring the desired outcome, as both candidates remaining in the presidential race - Ashraf Ghani and Abdullah Abdullah - declared victory.

Last week, US Secretary of State John Kerry flew for the second time within a few weeks to Kabul to resolve the dispute between the two camps. The result was an agreement to form a national unity government.

Both Ghani and Abdullah signed a joint declaration. According to the terms of the deal, the president will "appoint" the "chief executive officer" from the losing camp. Two years after the creation of this position, it will be transformed to that of a prime minister. As this plan violates the country's constitution, the government will have to convene a "Loya Jirga," or grand council to formalize the post.

Actually, this part of the deal was not a big surprise as Kerry had already persuaded the two candidates to agree to form an inclusive government during his trip to the war-torn nation in July. This time around, however, the agreement was officially signed by both candidates, following fresh disagreements over the criteria to be implemented in the election audit.

Both candidates appeared relieved after the deal was brokered by Kerry. Although it was believed before the elections that highly controversial figures such as Rasul Sayyaf and Rashid Dostum would turn out to be kingmakers, the US Secretary of State now stepped in to resolve the power struggle. 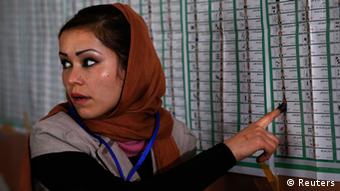 Elections in April were hailed as a victory for democracy

Neither the Uzbek warlord Abdul Rashid Dostum - Ashraf Ghani's vice presidential nominee - nor Ahmad Zia Massoud was present at Kerry's press conference on Friday, August 8. Massoud is the brother of Afghan commander Ahmad Shah Massoud who was assassinated in 2001.

Both of them were promised high positions in exchange for their support to Ghani in the election. Under Ghani's presidency, Massoud would have taken up a position resembling that of a prime minister.

It is so far unclear who will take up what role in the new government. In a press conference on August 12, Ghani said that Massoud was a core member of his team and that he was going to have an important function in the inner circle of his government. But it is not yet clear how the national unity government will be formed and what it will look like.

Criticism over lack of unity

Ashraf Rasuli, deputy head of the Afghanistan Bar Association, criticizes that the new government would be unconstitutional. "Under the constitution, the country has a presidential system with separation of powers and there is no provision of a prime minister's post," explained Rasuli.

Who to blame for civilian deaths in Afghanistan?

Amnesty International says that NATO forces in Afghanistan have failed to investigate their operations which result in a number of civilian deaths. Afghan survivors tell DW they are hardly compensated for their loss. (12.08.2014)

The US military fails to hold its soldiers accountable for unlawful killings and other abuses in Afghanistan, an Amnesty International report finds. The rights group's Horia Mosadiq discusses the issue with DW. (11.08.2014)

It is also not clear what powers the prime minister will have. Kabul-based political analyst Junus Fakur says that the issue should be clarified as soon as possible. "If it's not clear who is responsible for what area, and every one starts to act according to his or her will, then that would have serious consequences," Fakur pointed out, adding that even Karzai's government would then appear to be ten times better.

He is also concerned that the next five years will be no different from the past few months, should the national unity government be formed with the same politicians as in the electoral process. "Civil society and independent national and international figures must therefore be involved in this process," says Fakur.

Rasuli would have preferred a solution featuring a strong president who doesn't need to share power with any premier or "executive officer." However, he doesn't see any alternative to the Kerry-brokered agreement. Nonetheless, he is very critical of the Afghan politicians involved: "Unfortunately, they have made such a mockery of the electoral process that one doesn't even dare to speak out the words 'Afghanistan' and 'election' in the same sentence," said Rasuli.

Despite this sceptical view, many experts believe that it was the only way to escape the threat of total chaos. "There was no other way out," said journalist Shah Hussein Murtasawi. "We found ourselves in a no-win situation. There were threats to form two parallel governments, both of which would have driven the country into ruin. A solution for this dangerous situation can only be found in a government which includes both candidates. Afghanistan had the choice between war and coalition," the journalist argued.

For Murtasawi, a government of national unity could also mean a chance for defusing political and ethnic divides in Afghanistan. "Unfortunately, the vote had taken on an ethnic-discriminatory character. 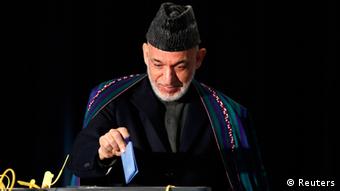 For this reason, it is better to form a national unity government." Murtasawi hopes that together in government, Ashraf Ghani, who gained most of the Pashtun votes, and Abdullah Abdullah, the favored candidate for the Tajik Afghans, can reconcile conflicting interests between the two ethnic groups.

The agreement between the candidates also means that a timetable for a joint commission should be established by the time the president is sworn in. Until now, the votes from 7,885 out of more than 23,000 ballot boxes have been audited, but now there are calls to speed up the process.

It is hoped that Afghanistan will have a new president by the end of August, in time for the NATO summit in Wales at the beginning of September. By then the Afghan signature should join the others on the security agreement with the US.