Schalke defender Baba Rahman was injured in the first half for Ghana but they were cheered by Andre Ayew's first-half penalty in a 1-0 win over Uganda. Egypt drew 0-0 with Mali as keeper Essam El Hadary made history. 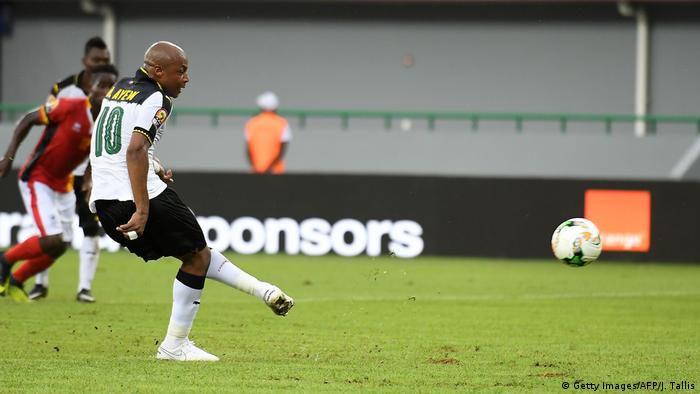 A penalty just after the half hour from striker Ayew was enough for fancied Ghana in their African Nations Cup opener, but an injury to left back Baba Rahman soured the mood and left Schalke fans fretting.

He came off after just 39 minutes and was replaced by Frank Acheampong. He has a bruised meniscus and has flown back to Germany with his tournament over.

Ghana, who despite their wealth of talent in recent years have not won the continential title since 1982, were the better side for much of the Group D encounter in Port Gentil.

But Ghana, runners-up two years ago, failed to find a second goal which would have eased worries of a Uganda leveller after a series of surprise results so far in Gabon.

Coach Avram Grant will hope his side correct their wayward shooting next time out against Mali on Saturday.

The other Group D game of the day saw seven-times winners Egypt held to a 0-0 draw by Mali. Egypt, among the tournament favorites with Ghana, never got going but their opener was at least memorable for their goalkeeper Essam El Hadary.

The 44-year-old veteran had been in line to be the oldest player ever to appear at an African Nations Cup but the starting berth was handed to Ahmed El Shenawy.

However, El Shenawy had to be substituted with an injury after just 25 minutes and El Hadary got his chance to make history.

He was soon tested as Mali held their own, arguably creating the best opportunities.

Storied Egypt coach Hector Cuper knows his side will have to play much better to have an impact in this tournament.