As a testament to their faith, Egypt's Coptic Christians traditionally have a cross tattoo on their right wrist. In earlier times, this was a symbol of the hardships they faced. Today, it's a symbol of resistance. 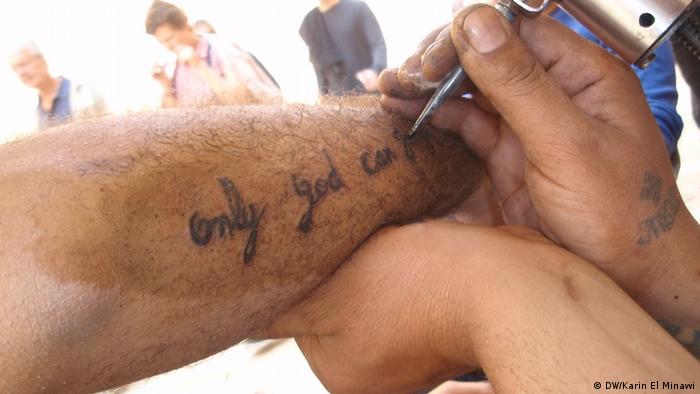 Two-year-old Kirolos, sitting in his father's lap and holding out his hand, watches the machine being operated by Magdy Girgis. The tattoo artist breaks the back end off a needle, dips it in black ink, and begins his work - without gloves. He forgot them at home. 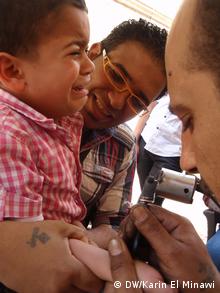 For a two-year-old, even a little cross is a lot to ask

Kirolos begins to cry after the first pricks begin and jerks his hand back. His father holds it in place and attempts in vain to soothe his child. Despite the crying and fidgeting, Girgis remains focused and goes about his works calmly - and swiftly. Two minutes is all it takes before a Coptic cross is engraved on the child's wrist. A bit of disinfectant is applied, and the job is done. Ten Egyptian pounds is the price. That's about one euro, 20 cents.

Girgis, 38, himself covered in tattoos, engraved his first cross at the age of 14. He has since turned his passion into his livelihood, perfecting his craft over the years, as a freelance artisan. From time to time, he takes commissions from hair salons, where he tattoos lips and eyelids. Most often, however, his office is on the street, a small alleyway in Cairo where he sits under a sun shade across from St. George's Church.

It is early on a Sunday morning, and his potential customers are still attending the service. When the congregation begins to sing the benedictory hymn, Girgis gets out his utensils: cotton swabs, disinfectant, ink, needles and the tattoo machine.

Just after dismissal from the church, Girgis is surrounded by customers - and by those who just want to watch. Copts from all walks of life have their crosses done here, from wealthy businessmen to uneducated garbage collectors. "The cross is a symbol of their religious belief - even those without money have a right to this," says Girgis. For those who can't afford it, he gives them the tattoo for free. For Egypt's Christians, this is simply tradition. 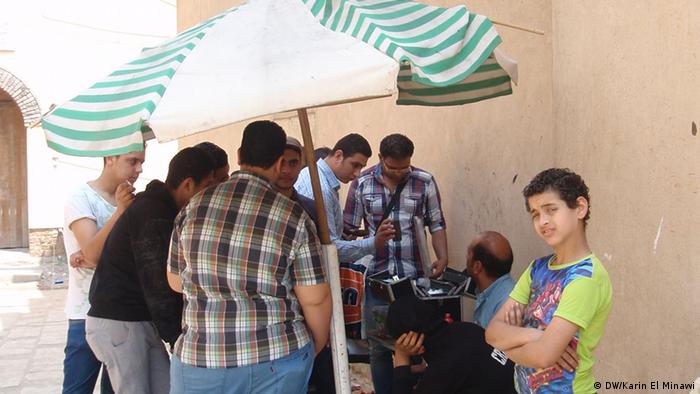 Magdy Girgis at his makeshift tattoo parlor on Cairo's streets

The Coptic Orthodox Church in Egypt is one of the oldest Christian churches in the world. Mark the Evangelist is believed to have founded a Coptic community in Alexandria in the first century BC. Back then, children were marked with a cross to signify their belonging to Christianity. When Egypt was conquered by Muslims around 640 AD and placed under Islamic control, the practice of tattooing increased dramatically. The people were forced to convert to Islam, and those who didn't were marked with a cross on their wrist - and forced to pay a religious tax. It was a sign of ostracism back then, but today, the cross carries a positive meaning.

"I am proud of my religion and want to bear witness to it," says Amir Gamal. The sociologist, 28, is receiving his fourth tattoo today. In addition to a depiction of the crucifixion on his back, and two crosses, today he is engraving the statement "Only God can judge me" onto his skin. "This is a symbol of resistance. They are proof that we don't have to be afraid to show we are Christians," Amir says. But it wasn't always that way. 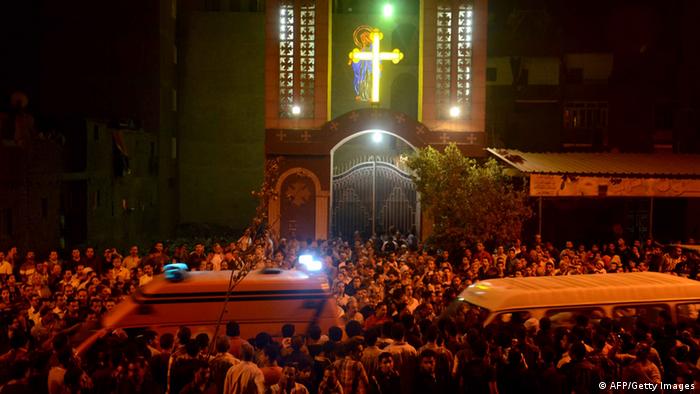 Violence against Copts in Cairo reached a high point in 2013

Of Egypt's population of around 90 million, some 10 percent belong to the Coptic Church. Despite constitutionally protected religious freedoms, Egypt's Copts are regularly targets of violence. Particularly severe were the attacks in the summer of 2013, following the military clearing of the Muslim Brotherhood camps. Dozens of schools and churches were attacked. With al-Sisi in power, the situation has since calmed. Christians have been given more security, but they remain the butt of Islamist persecution. "These tattoos truly are a sign of resistance, perseverance and solidarity. That's why more and more Copts today are having this done," says Magdy Girgis.

And it's not just Christians. Despite it being forbidden by Islam - and frowned upon by society - more and more Muslims in Egypt are getting tattoos. A tattoo scene is even emerging here, with several parlors opening up. But Girgis wants nothing to do with that. On principle, he won't perform tattoos that aren't religious. "I want my work to have a purpose," he says.

In the meantime, 25-year-old Gina Adel is sitting in front of Girgis, waiting for her first cross. She asks him about local anesthetics, and he laughs. "I'll be really fast, and you won't feel a thing," he says and turns on his machine.

'IS' video purportedly shows executions of Ethiopian Christians in Libya

A video released by "Islamic State" purportedly shows the executions of some 30 Ethiopian Christians, who were captured by the group in Libya. The jihadists recently gained a foothold in the conflict-marred country. (19.04.2015)

In Berlin, remembering a 'martyr'

Following the assassination of 21 of their brethrens by extremists in Libya, Germany’s Coptic community gathered in Berlin to commemorate the dead. DW’s Naomi Conrad met a mourner whose cousin was among those murdered. (20.02.2015)