A soccer ball can change a life

Addiction, fights, bad luck - homelessness has a variety of causes. An estimated 300,000 people in Germany are living on the street. But, in some cases, something as small as a soccer ball can get them back on track. 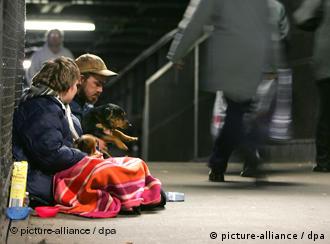 Life on the street is though but not hopeless

Angelo does not like to talk about the day his life changed. Back then he used to work in a car paint shop. "Everything went well until the accident happened," he said. "I don't know if I was careless or didn't use my head and mindlessly left some things lying around that could explode."

Angelo lost his job, his flat. His mother did not have room for him to stay with her.

Before ending up on the street, the 24-year-old managed to ask for support. Now, he not only has a social worker to help him get a grip on his life again but something else as well - a soccer team. 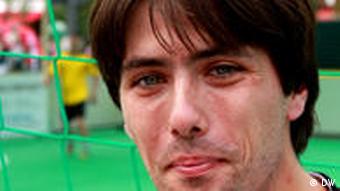 Angelo lost his job and his flat - but not his smile

"We take care of teenagers, alcoholics, drug addicts and offer them something to do in their free time: going to the movies or a concert for example. But our best and brightest project so far is the soccer project," says Zvonimir Francki, Angelo's coach. He works for AGJ, an organization for prevention and rehabilitation within the diocese of Freiburg in southern Germany.

Once a week, every Thursday, Francki and his team head out to the soccer field for practice.

Soccer instead of work programs

For the players, soccer added new meaning to their lives. It's about building confidence, boosting skills and making friends - abilities that are often lost by people with a shattered past.

"Soccer is simple to play and simple to provide," said Katrin Kretschmer, who works for "Anstoss!," an organization that promotes social integration through sports and mainly focuses on soccer.

Often, it can be easier to reach out to homeless people or addicts by asking them to join a soccer team than a work program, for example. Soccer is a lot more fun, but it's not just about having a good time. According to Kretschmer, the program is also truly beneficial for the players:

"Some of them used to play soccer when they were children but many forgot about it while living on the street," she said. "Now they find back something they know, they get back something like a team and friends."

Angelo certainly agrees. He used to play soccer as a teenager. "But with that team I didn't have what I've got now - fun, team spirit, happiness," he said, smiling. "If you don't have that, there's no use in playing in the first place."

On some weekends, he and his teammates play at tournaments, like the German National Championship for homeless people. This year, the street soccer tournament took place in Hamburg, in the seedy nightlife district Reeperbahn. Seventeen teams of homeless people, drug addicts, alcoholics and asylum seekers competed for the cup.

"It was really exciting. Some players were really good," Angelo said. For him, matches are a nice change of pace.

In Hamburg there was a bonus, a trip to Rio de Janeiro. Germany's national coach for the homeless team, Stefan Huhn, got to hand out plane tickets to the eight best players at the national championship. They will represent Germany at the Homeless World Cup later this year.

From 'homeless person' to 'athlete' 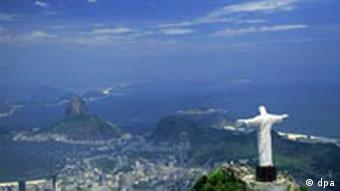 The Homeless World Cup was held for the first time in the Austrian city of Graz in 2003. The tournament is the brainchild of Mel Young, honorary president of the International Network of Street Papers (INSP). Now the project is supported by UEFA and sponsored by Nike and the Vodafone Foundation.

Its mission is to use a universally loved sport - soccer - to address the problem of homelessness. On the one hand, organizers aim to get homeless people off the street. But on the other hand, they also want to raise awareness among the general public.

"As somebody said, 'As soon as the game starts, you forget they are homeless'," Mel Young said.

The opportunity of a lifetime

"For some it's a real dream come true because they haven't been in another country or in an airplane before," says Katrin Kretschmer. "Most players who've been at the World Cup were so motivated afterwards - it was just incredible."

According to surveys conducted six months after the previous Homeless World Cups, over 90 percent of the participants say that they found new motivation in their life. More than 70 percent changed their lives for the better; they found new jobs and homes and tried to face their addictions. Some even become players or coaches for professional or semi-professional soccer teams.

For Angelo, going to Rio remains a dream. Coach Stefan Huhn did not pick him this time. Angelo's teammate Martin, however, got nominated.

Regular practices all over town 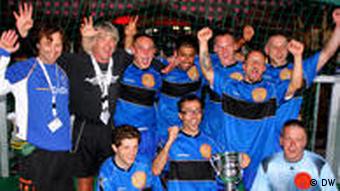 Still there are other games and tournaments for Angelo to look forward to. And Stefan Huhn and his fellow social workers from Hamburg have even bigger plans. "We're trying to set up a street soccer league to reach out to even more people and offer them possibilities to do something else with their lives," Huhn said.

They already own a mobile soccer field which they can install in various places all over Hamburg. Teams could play twice a month, maybe even more often. A regular schedule is what Huhn and his colleagues are striving for.

Regularity is something Angelo wants as well - and he's almost there. First, he wants to find a permanent job and a flat. Once everything is settled, he would like his girlfriend to move in with him.

A year and a half after the launch of a controversial online game about the homeless, the ‘Pennergame’ is a runaway success. But it is also a source of irritation to critics, who say it is morally flawed. (25.01.2010)

Homeless photographers show another side of Dusseldorf

Some people stop and make a donation, most continue on their way. Professional photographer Thomas Struth teamed up with homeless vendors in Dusseldorf to reveal another side of the city. (07.08.2009)

Uwe Mayer has been selling street newspapers in Stuttgart for 10 years. Now he's concentrating on finding his way back into a normal life with a new job, a new place to live and a new love. (18.05.2010)

Picture gallery from the championship in Hamburg