A scandal-filled year for FIFA and the DFB

Arrests, revelations, resignations: 2015 was a year that shook FIFA and the German FA to their very foundations. With scandals still in high gear, the fun promises to continue into 2016. 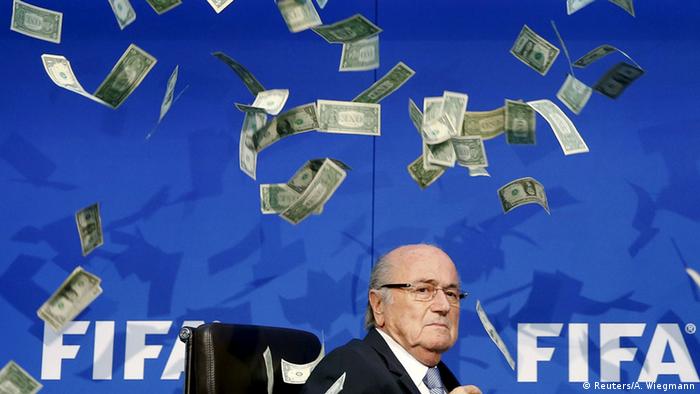 The year 2015 was a truly dark one for organizations that run professional football and a lot of things have changed over the past 12 months, both at FIFA and the DFB (German FA).

As Thomas Bach, President of the International Olympic Committee put it recently: "enough is enough!"

FIFA had been the subject of allegations of corruption for years, but until 2015, they never really went anywhere. All of this changed in the early hours of May 27th, when the Swiss police, at the request of US prosecutors, moved in on a hotel in Zurich, arresting seven high-ranking FIFA officials. Among the arrested were two FIFA vice presidents, Jeffrey Webb of the Cayman Islands and Eugenio Figueredo from Uruguay. The US Department of Justice indicted them on charges of money laundering and corruption in connection with the awarding of the rights to host World Cup tournaments and television rights. The unsuspecting delegates had arrived in Zurich to attend the FIFA congress, where they had expected to be able to cast their votes for the next president of football's governing body.

It came as a surprise to no-one that the new FIFA boss was the same as the old one: Joseph "Sepp" Blatter. All but one of the candidates who had stated their intention to challenge him for the post, Jordanian Prince Ali Bin Al Hussein, had dropped out of the race by the day of the election. The re-election of Blatter, FIFA's president since 1998, was little more than a formality. The Swiss national tried - as so often before - to write off the latest allegations of corruption as being due to the mistakes of individuals - as opposed to a more general, deeper problem at FIFA. However, in the days that followed, it even became apparent to Blatter that the affair had taken on a life of its own that could force him out of office, so the 79-year-old president tried to seize control of the situation. Just four days after winning re-election, Blatter announced that he would leave office early as he felt his leadership had been called into question. He stressed that FIFA "has been my life...what counts most for me is FIFA and football around the world."

For months, UEFA President Michel Platini was a favorite to replace Blatter as FIFA president - until the men's common past caught up with the Frenchman. In September, the Swiss authorities opened up an investigation into a dubious payment of two million Swiss francs (1.85 millon euros, $2 million) that Blatter made to Platini in 2011. By October, it had all become too much for FIFA's Ethics Committee, which handed down 90-day provisional suspensions banning both men from engaging in all activities related to football. This prevented Platini from registering with FIFA to become a presidential candidate at the extraordinary congress scheduled for February 26, 2016. 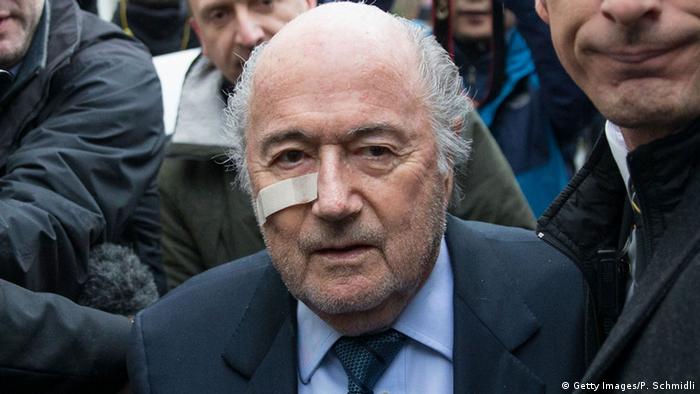 Two months later, on December 21, Platini's hopes of succeeding Blatter were almost completely dashed. The Ethics Committee slapped eight-year bans on both men. Both announced that they would appeal their bans.

'No right to go against the president'

For his part, Blatter took the opportunity to summon the world's press for a news conference at FIFA's former headquarters, in which he vowed to use every legal avenue available to him to try to clear his name. Blatter complained that he had become his critics' "punching ball" and insisted that the Ethics Committee had "no right to go against the president."

Meanwhile, in Frankfurt, the president of the DFB, Wolfgang Niersbach, was coming under growing pressure of his own. In mid-October, German news magazine "Spiegel" reported not all had been above board in Germany's successful bid to win the right to host the 2006 World Cup. The magazine cited sources that alleged the bid committee had used a slush fund to try to buy votes. At the center of the affair is a payment of 6.7 million euros made by the DFB to FIFA, the purpose of which remains unclear. The DFB said the 2006 World Cup organizing committee had made the payment to unlock a FIFA grant of 170 million euros to help run the tournament. FIFA has rejected the explanation. 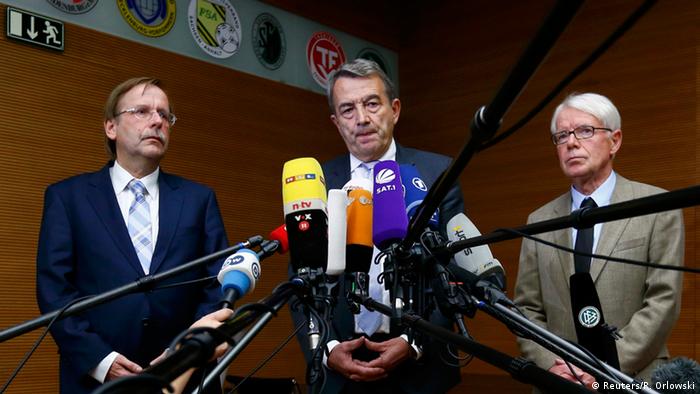 Niersbach, flanked by his interim replacements, Koch and Rauball, took 'political responsibility' for the DFB scandal

On November 9, Niersbach stepped down to take "political responsibility" for the affair, but made it clear that he believed he had done nothing wrong. Since then, the DFB has been without an elected president. DFB Vice President Rainer Koch and Reinhard Rauball, the head of the German Football League (DFL), have taken over the duties of the president on an interim basis.

A long shadow in the affair was cast on the president of the 2006 World Cup organizing committee, German football legend Franz Beckenbauer. His signature was found on a draft agreement with former FIFA Vice President Jack Warner in 2000, which even the DFB conceded would suggest at least a suspicion of an attempt at buying votes in the election to decide who should host the 2006 World Cup. 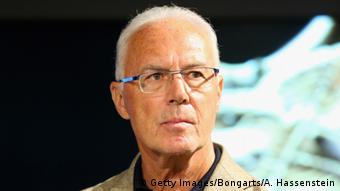 After weeks of silence, the "Kaiser," as he is popularly known in Germany, used an interview to reject the charge. He also told Munich-based newspaper "Süddeutsche Zeitung" that he had "always blindly signed when they needed my signature. If I trust someone, I'll sign anything. Blind! "

Both FIFA and the DFB are facing an uncertain future. The respective scandals are far from over, and in early December there were more raids in Zurich - prior to a meeting of the FIFA Executive Committee. Two more FIFA vice presidents were arrested - Juan Angel Napout of Paraguay and Alfredo Hawit of Honduras. Both are in custody pending possible extradition. They were on a list of 16 high-ranking football officials from Central and South America the US Department of Justice has indicted on corruption allegations.

On February 26, FIFA is to use an extraordinary congress in Zurich to elect a successor to Blatter. A package of structural reforms aimed a combating corruption at the world governing body is also expected to be adopted. Among other things, the proposal would see term limits of 12 years imposed on senior FIFA officials.

A new DFB president will only take office after the affair surrounding the 2006 World Cup has been completely cleared up. This could take some time. DFB treasurer Reinhard Grindel, who is the most likely man to succeed Niersbach, has said that he doesn't expect the external law firm that the DFB hired to investigate the dubious payment to be ready to release its findings until February at the earliest. The Christian Democrat member of the Bundestag lower house of parliament has the support of Germany's amateur clubs, meaning he appears all but certain to win a future vote. Assuming he gets it, he'll have a tough job ahead of him.

Gianni Infantino: FIFA boss with a flair for opportunity 09.06.2022

He is the most powerful man in the world of soccer — and not without a fair share of critics. The Swiss was always on hand to capitalize when a door was opened. Nowadays, he opens the doors himself.