Massoud Hassani, an Afghan designer working in the Netherlands, has invented a giant sphere driven by wind power to clear landmines. He now wants to test it in his home country. 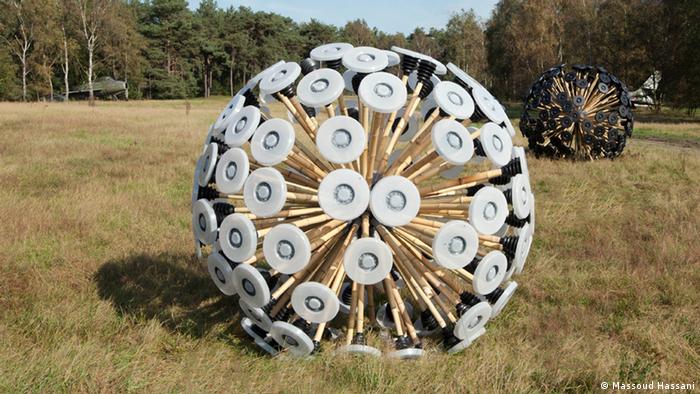 At first glance, from a distance, the object of Massoud Hassani's phantasies looks like a gigantic dandelion gone to seed. It has 170 arms made of bamboo staves emanating from a small ball in the middle with a plastic plate attached to the outer ends of each stave.

Although Hassani's prickly parachute was nominated for the 2012 London Design Prize - along with the Olympic torch and Kate Middleton's wedding dress - his innovation has nothing to do with esthetics.

Quite the contrary, the object was designed to provide sufficient surface and stability to allow it to float in the wind to its intended destination: the mine fields of Afghanistan. The so-called "Mine Kafon" also needs to have a certain amount of weight to trigger the controlled explosion and deactivation of buried landmines. The center of the sphere houses a GPS tracking system to keep tabs on it and to document areas cleared of mines. 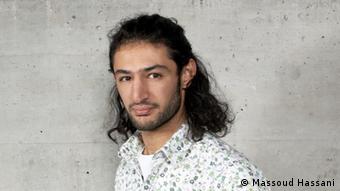 Massoud Hassani came up with the idea thinking about childhood toys

Designer Hassani pays special attention to the practical use of his designs. He left Afghanistan for the Netherlands 13 years ago to study at the Eindhoven School of Design. As a child in Kabul he built toys driven by wind power. For his final graduation project in Eindhoven, Massoud was inspired by his childhood designs.

"When we were children we built a lot of toys with wheels. The area where we lived had a lot of landmines. Some of our vehicles were too fast and ended up stuck in the mine fields. So I got the idea to build something like them, but only heavier and bigger, to deactivate the mines," said Hassani.

War was like a movie in those days, and it was not a threat, but rather a playground, he recalls. Europe was the land of his dreams. Today, he knows that life in Europe is also not easy and that war is dead serious.

Since 1994, more than 600 million dollars has been spent by the United Nations and other organizations to clear landmines around the globe. But, despite these efforts, as many as 3,000 people are injured by exploding mines every year in Afghanistan alone.

This is why Hassani would like to test his invention in the field as soon as possible. "I am working with two companies on the practical implementation, and as soon as we're ready we will go to Afghanistan and look for a mine field. But there are also other countries, like Angola, where there are even more mines: 20 million - and 12 million inhabitants," noted Hassani.

No replacement for people 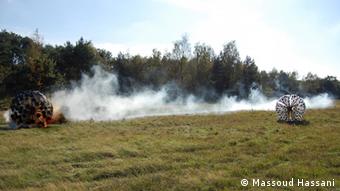 Hassani's 'Mine Kafon' has been undergoing tests in the Netherlands

Hassani hopes the test of his "Mine Kafon" will convince skeptics, like the head of the Dutch Armed Forces anti-mine unit. Henk van der Slik does not think that Hassani's invention can replace the dangerous work of specialists, their metal detectors and their dogs.

For one thing, he does not think the Mine Kafon is stable enough to withstand one or more explosions and continue functioning. On the other hand, metal shards from the mines, explains Slik, would be strewn around the area after they blew up, making life more difficult for minesweepers, which could still identify them as unexploded ordinance.

The Dutch landmine expert sees a different purpose for Hassani's dandelion. It could be used to identify potentially dangerous areas. It could float over terrain, and if something exploded, people would know to avoid the area.

Massoud Hassani, in any case, plans to continue with his vision and work on improvements. He has founded his own company, Aynda Studios, and has developed tests in cooperation with the Dutch defense ministry. He is also working on a version suitable for forested areas and not just deserts and open spaces, the designer said. And he is working on less high-tech projects, as well, to improve people's everyday lives - a cook book with Afghan recipes, to name one.

NATO combat troops are set to pull out of Afghanistan by the end of 2014. Member states have promised continued commitment, but key questions still need to be resolved. (05.12.2012)

Which form should foreign policy take when other states appear close to collapse? The crises in Mali and the Democratic Republic of Congo have given that question a new relevance, not least for Germany. (04.12.2012)