A Painful Reminder of German Colonialism | Germany| News and in-depth reporting from Berlin and beyond | DW | 11.08.2004

A Painful Reminder of German Colonialism

Wednesday marks the 100th anniversary of Germany's brutal crushing of an ethnic uprising in Namibia. But reconciliation has been marred by a lawsuit filed by Namibia's ethnic Herero people against German companies. 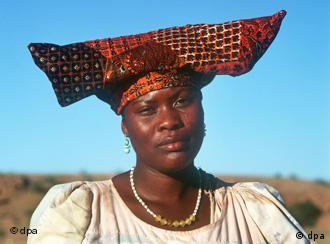 The Herero want compensation and a public apology from Germany

Then called German Southwest Africa, Namibia was a German colony between 1884 and 1915. Tensions between the ethnic Herero people and the German rulers spilled over in January 1904 when Herero warriors, seeking to revolt against their masters for suppressing them and seizing their land, killed around 200 German soldiers and settlers.

The Germans were sent arms and reinforcements by the Emperor in Berlin and lashed back on Aug. 11, 2004, in what came to be known as the decisive battle of Warterberg. 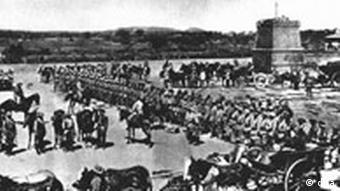 German troops prepare to put down the Herero rebellion in 1904.

During the fight, German soldiers are said to have forced the surviving Herero into the Omaheke desert and blocked access to all water sources. Thousands died a painful death, from starvation and thirst. Between 45,000 and 65,000 Herero are believed to have been killed. German General Lothar von Trotha said at the time he would "wipe them out with rivers of blood." Historians have described his policy as one of "blatant terrorism" and "shocking brutality."

That October, the Nama, another ethnic tribe, declared guerrilla war against the Germans. The Germans reacted with merciless tactics including poisoning watering holes. Thousands died in the mayhem, and the survivors were locked in concentration camps. Women and children were forced to work in the building of ports and railways.

Outraged German missionaries who visited Namibia at the time spoke of inhumane conditions and of inmates "dropping like poisoned flies" under the strains of forced labor.

The horror first ended when Germany was forced to hand over Namibia to South Africa after its defeat in World War I.

In recognition of a difficult colonial history with some shameful chapters, the German government has spoken of a "special responsibility" towards Namibia. A view of a commercial street in the Namibian capital of Windhoek.

Much of that has taken the form of development aid, with Germany being Namibia's largest foreign aid donor. Berlin has pumped more than €500 million into Namibia since the country gained independence from South Africa in 1990. Most of it has been used for development and culture programs.

This week Germany will send its first senior government official to Namibia. In a symbolic act on Saturday, Development Minister Heidemarie Wieczorek-Zeul will remember the victims of the Waterberg massacre together with representatives of the Herero in Okakarara, the scene of the battle. The German minister will also inaugurate a cultural and tourism center built with German aid funds.

"Healing the wounds of the past"

Despite the attempts to overcome the divisions of the past, the reconciliation process has been marred by a lawsuit filed by the Herero People's Reparation Corporation in the US. It seeks $2 billion in damages from several German companies including Deutsche Bank, mining company Terex Corporation and shipping company Deutsche Afrika Linie, all of which allegedly profited from Germany's occupation of Namibia.

The German government has refused to consider any compensation claims, pointing to its role as development aid provider in Namibia, as proof of its commitment to mend fences.

Earlier this month Germany's Ambassador to Namibia, Wolfgang Massing, said the lawsuit would amount to naught. "It will not lead to any results. While it is necessary to remember the past, we should move forward together and find projects that will heal the wounds of the past." 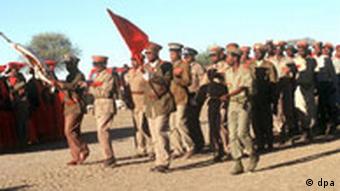 A group of Herero people celebrate Herero day in Okahandja. The day is celebrated on the first Sunday after August 23 every year.

But the ancestors of the Herero insist on compensation as well as a public apology from Berlin, just as other countries did for the crimes of the Nazi era.

"It was genocide," Herero tribal leader Kuaima Riruako told news agency dpa. "We were massacred and our land, our cattle, our culture was seized." Riruako added that the demand for reparation was an attempt to "restore our dignity and get back what was taken away unfairly from us."

So far German leaders have skirted the issue of apologizing to Namibia's ethnic tribes. In January this year, German ambassador Massing regretted the brutal reaction of the German army to the Herero uprising, but refused to react to allegations of genocide.

The fact that Germany hasn't officially apologized has angered many inNamibia.

"The Germans have shown themselves as masters of racism, andthey lack respect for black people," Arnold Tjihuiko, the chairman ofthe Herero Committee for memorial festivities, told the newsweekly DER SPIEGEL. "We want the Germans to say, 'We're sorry!'"

Germany's ambassador to Namibia has called on the Herero people to drop a $4 billion (€3.3 billion) lawsuit filed three years ago in US courts for atrocities committed under colonial rule. (August 5, 2004)

Namibia on Sunday marked the 100th anniversary of the Herero Rebellion, remembering one of the darkest chapters of Germany’s colonial past in what was once German Southwest Africa. (Jan. 11, 2004)