A 'nudge' towards the Nobel prize

The Nobel prize for Economics has been awarded to the American Richard Thaler. The behavioral economist's research explores the circumstances in which economic behavior can be made "sensible." 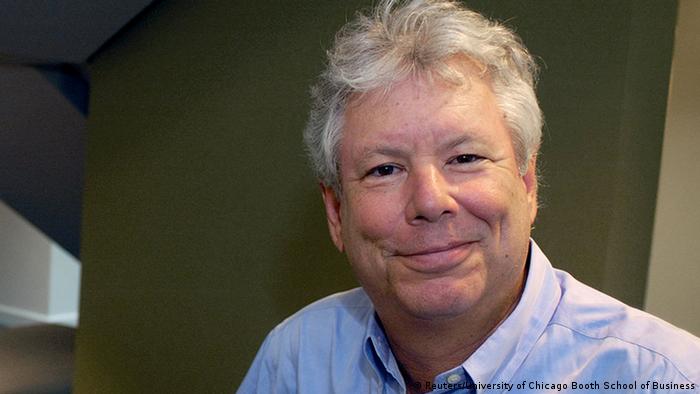 In contrast to the many economists who believe that man behaves in an economically rational and sensible way, Richard H Thaler, the winner of the 2017 Nobel prize for Economics, holds that the man on the street is not, by nature, sensible or rational when it comes to making economic decisions.

According to Thaler, humans often need to be pushed, or given "a nudge" in the right direction, to act in an economically sensible way. Then people may make better, more "sensible" decisions – which is especially important when it comes to things like borrowing money or buying insurance.

"I've basically made a career stealing ideas from the psychologists," joked Thaler at a press conference on Monday at the University of Chicago where he teaches.

Thaler also doubts that in his more than 40 years of teaching that he has been able to convince traditional economists of the advantages of behavioral economics. "You don't change anybody's mind," he said. His strategy has been one "of corrupting the youth," referring to the numerous students he has taught over the years.

Common sense is not very common

This idea of giving the ordinary citizen "a nudge" has come to define Thaler's work. One of his most famous books, co-written with Cass Nunstein, is titled "Nudge: Improving decisions about health, wealth and happiness."

It explores the idea of gently encouraging those people who do not normally act rationally when it comes to their money to act in a more sensible way, to be less swayed by advertising and its inevitable empty promises, and to have less regrets as a result.

Read more: What you need to know about the Nobel prizes

In his book "Misbehaving: The making of behavioral economics," Thaler explored the vulnerability of ordinary people in this relationship, particularly when it comes to making decisions of potentially major importance.

Looking after number one

In "Nudge," Thaler and Sunstein look at the ways in which citizens can be economically influenced. They come to the conclusion that people more inclined towards cautious, long-term planning tend to make better decisions than the more impulsive minded.

They also conclude that the more unclear or uncertain a product or service is – particularly when it is expensive or where borrowing is required – the more easily led a customer will be.

Special attention was paid by the authors to two markets of particular significance in the US – real estate and credit cards. Close attention is also given to the manner in which health insurance is bought and sold and how it can relate to human behavior.

A nudge can inspire someone to make more rational and ultimately more sensible financial decisions. But it can also subconsciously influence people, something the advertising industry has become masterful at. This observation invites the ordinary customer to always be aware that they are being nudged and to ask themselves: who is trying to influence me and why?

As well as studying the behavioral science around pensions, credit card markets and real estate, Thaler has also examined the financial crisis of 2008 and asked if it could have been avoided in a system where "sensible nudging" prevailed.

Yet in the end, one question remains…

When asked to summarize his work, Thaler gave a simple outline: "The most important lesson is that economic agents are humans and that economic models have to incorporate that."

However, whether these nudges affect consumers for the better ultimately comes back to one thing, according to Thaler and Sunstein: people must be able to recognize a nudge for what it is when it comes and decide for themselves if they will follow it or not.

But as we have known for thousands of years, human beings makes mistakes – to err is human, after all. Therefore, the work for which Thaler won his Nobel prize is not yet finished. Indeed, it probably never will be.