A monastery, one millenium in the making

In southern Germany, without cranes or electricity, a monastery town is being built more than 1,000 years after the original plans were drawn up. Luckily, there are more than enough candidates for the hard work. 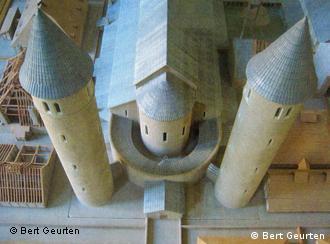 The town of Messkirch already features an impressive Renaissance chateau with a castle and late Gothic-style St. Martin's Church, as well as stately homes in the city center.

It's a good-looking town near Lake Constance that already sees its fair share of tourism. However, next year, a new curious attraction will bring tourists from more than just within Germany, hopes the local city council - 40 stonemasons, bricklayers and carpenters, dressed in medieval garb, will begin work on a monastery before the eyes of an astonished audience.

From plan to monastery

Messkirch didn't have a large monastery originally. Although the town played an important role in bringing Christianity to the region in the 8th century, it was mainly a base for secular princes.

The plans for the monastery to be built there now don't come from Messkirch, but from the Swiss town of St. Gallen. For over 1,000 years, it was one of the most precious treasures of the monastery's library there. The plans were made in the 9th Century by monks of the Lake Constance island of Reichenau. The plan is an idealized diagram of a spiritual city with an abbey church as the center. 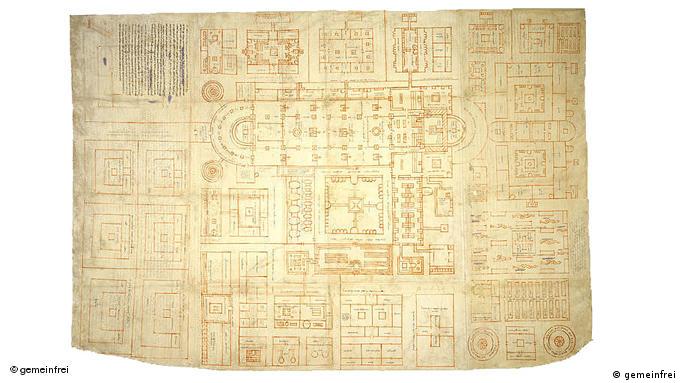 The plans were drawn up in the 9th century

"It was the master plan for hundreds of monasteries in Europe. The completion of the monastery town is not really our focus, but rather the building," said Bert Geurten, chairman of the Carolingian Monastery Town association.

"It is important to us to show that they possessed excellent craftsmen and excellent builders in the early Middle Ages. That is what we want to present in the first place - and the finished building is only the second step."

Castle as a model

The early Middle Ages fascinated Geurten as a youth. As a 17-year-old he saw an exhibition about Charlemagne which featured a model based on the plans from St. Gallen.

The model bounced around in his head until, decades later, Geurten visited the French town of Guédelon. In 1997 construction began on a castle, typical of the Middle Ages, using the techniques of the era. 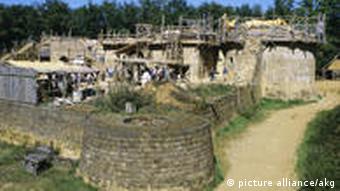 "When I saw Guédelon, I thought this is a great thing that someone could model other projects on." Geurten said "And then I remembered the monastery town of St. Gallen, which has never been built in its original form. I would build it."

Victory of the "crazy"

The skepticism of the Parisian authorities against the project in Guédelon was initially very high, the initiators were even declared insane.

But the proponents of experimental archeology saw their vision through and the "crazy" site has now blossomed to become the second biggest tourist attraction in Burgundy.

Geurten hopes for the same effects for his monastery project in Messkirch. Now that the financing has been assured, the project is expected to break ground in the spring of 2012. And by summer tourists, interested in the progress of the construction of the monastery town site, should also begin arriving.

Between each spring and autumn, 40 craftsmen will live and work at the construction site. Tourists will be able to look over their shoulders and ask questions about the work. The enthusiasm for the monastery project is so large that it saw four times as many applicants as there were places available. Similar to the workers in Guédelon, the workers will be dressed in clothing reminiscent of the early Middle Ages. 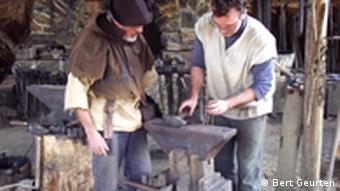 The authenticity of the scene might be thrown off by safety gear, but they have a plan for that

Geurten said that "eminent European scientists in this field" will be on hand to assure that everything is historically accurate, through a scientific advisory board. But not everything can be as it was, due to modern laws governing work places.

"What is demanded by the 21st century security measures are safety boots, helmets, and we will of course comply," Geurten said. "But can one also include compromises. In Guédelon for example, the helmets were tucked under medieval sun hats, and wooden shoes are in Baden-Wuerttemberg recognized as safety shoes, which were common in the 9th century. So it is reasonable that between the 9th and the 21st centuries, we can cover the angles. "

The estimated length of the construction project in Messkirch is about 40 years. The town is hoping to cash in on an increase of tourists throughout the entire process.

Mayor Arno Zwick wants to get the entire town on board: "Messkirch must be careful to ensure that all together, with trade, services and catering pulled together we harness as much of the positive effects brought by this visitor-magnet 'monastic town.'"

Once finished, the monastic town could be used in diverse ways, said Geurten, but the 62-year-old realizes he likely will not see it through to completion. For him, anyway, the building of the Carolingian monastery city has always been the reward, rather than its conclusion.

With its position on the River Neckar, the historic Old Bridge, the castle and its medieval town center, Heidelberg has been a prime destination for the romantic at heart since the 19th century. (15.11.2010)

The Swabian Alb, home to beautiful countryside and romantic castles

The rolling, alpine hills in south-western Germany boast more castles than just about anywhere else in the country. (05.04.2011)