Some scientists will go to amazing lengths to prove a theory. Botanist and archaeologist Dominique Görlitz is no exception. He's setting sail to cross the Atlantic — against the wind — in a reed boat. 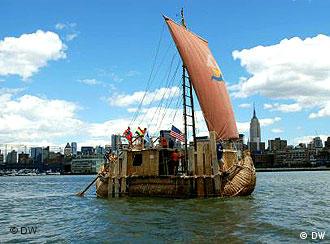 Long before Columbus or the Vikings ever set foot on American soil, Stone-Age man made regular trans-Atlantic trips in reed-hulled sailboats, according to Görlitz' theory. The ancient mariners could have established trade routes between the Americas, Europe and Africa by making use of the Gulf Stream and prevailing winds as many as 14,000 years ago. 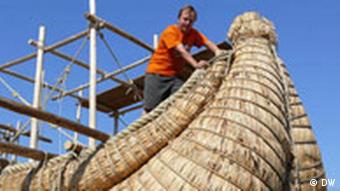 "We underestimate the capabilities of our ancestors," said Görlitz, who is embarking on the trip as part of his PhD research at the University of Bonn. "Homo-erectus was able to walk out of Africa and settled the other continents almost 2 million years ago, why could a handful of Neolithic seafarers not be able to cross this simple waterway?"

Görlitz said he believes the discovery of tobacco beetles and cocaine -- native to the Americas -- in the Egyptian tombs of Ramses II and Tutankhamen, both of whom lived around 1300 B.C., along with the Stone-Age cave drawings of boats and ocean currents founds near Gibraltar strongly support the idea that trans-Atlantic trade occurred long before Christopher Columbus set sail in 1492.

If successful, the crossing will mark the return leg of an earlier expedition by the Norwegian adventurer Thor Heyerdahl.

Twenty-three years after his ground-breaking voyage aboard the Kon-Tiki in 1947, Heyerdahl sailed a papyrus boat called the Ra II from Morocco to the Bahamas, proving that trans-Atlantic sailing -- at least with prevailing winds -- was possible.

"Thor Heyerdahl always made one-way trips, he always traveled downwind from A to B," said Görlitz. "We plan on going from B back to A like all mariners would have done." 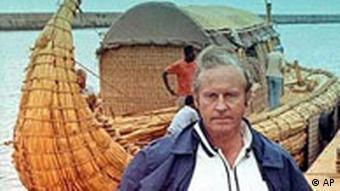 Named after a god of the Canary Islands, the Abora 3 was built on the shores of Lake Titicaca in Bolivia by crewmember Fermin Limachi, an Amyra Indian whose father built boats for Heyerdahl.

"Growing up next to one big boat after the other, all designed for ocean travel, I feel honored to be part of the crew," said Limachi. "It's my way of paying homage to my father."

Sailing into the wind

The boat is equipped with a single mast and 14 keel boards for steering -- a technique Görlitz developed during two earlier expeditions in the Mediterranean on the Abora 1 and Abora 2. The keel boards allow the vessel to tack into the wind, something previous reed boats have not been able to accomplish.

According to Görlitz, the Abora has completed a number of successful test runs under the skyline of New York City to see how the boat handled sailing into the wind.

"We sailed for the second time under 80 degrees of true wind, so that is a very strong indication that this vessel is prepared for the Atlantic voyage," he said. 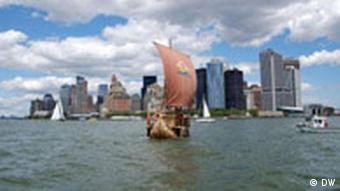 Görlitz tested the Abora 3 off the coast of New York

Hailing from Germany, Norway, Bolivia and the US, the crew of the Abora 3 will have to endure the elements of the North Atlantic -- during hurricane season -- without the comforts of even an onboard toilet. However modern technology will be along for the trip including satellite communication and navigation, emergency transmitters and three inflatable rafts with room for 12.

For Norwegian crewmember Tormod Granheim, all adventures are a balance of excitement, danger and exhaustive preparation.

"People only see the adventure but they never understand the amount of groundwork that goes into an expedition such as this," said Granheim.

Abora 3 team members said they understood that the expedition cannot prove that trans-Atlantic trade existed, but if successful, Görlitz said he hopes it will shed light on show that Neolithic man was more advanced than previously thought.

"These adventurers are trying to tell the human story which you cannot explain just using science and DNA," said Bauge. "You need extensive botanical, biological and archeological studies as well as expeditions like these to help us understand our past."

DW-WORLD.DE spoke to French marine archeologist Franck Goddio, who brought lost parts of the legendary port of Alexandria and the ancient cities of Heracleion and Canopus back to light. (05.04.2007)

In 1856, two workers found 16 bones in a limestone quarry in the Neander Valley, east of Düsseldorf. It was thought the bones belonged to a cave bear, but they were subsequently found to be the remains of early man. (20.08.2006)