A Berlin museum director says a 3,400-year-old bust of Queen Nefertiti will not be shipped to Egypt for a temporary exhibition -- despite a threat by Egypt to ban future displays of its ancient artefacts in Germany. 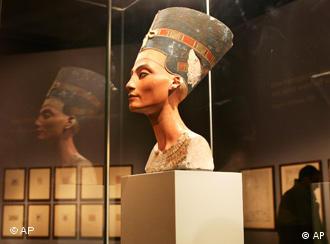 After several moves in recent years, Nefertiti is now at Berlin's Museum Island

Dietrich Wildung, the director of Berlin's Egyptian Museum, said he wasn't worried about a ban. A boycott, Wildung said, "wouldn't bring any significant change," adding that the last time Germany had borrowed a piece from Egypt was in 1985.

On Sunday, Egyptian antiquities supremo Zahi Hawass told the country's parliament "(Egypt) will never again organize antiquities exhibitions in Germany if it refuses a request, to be issued next week, to allow the bust of Nefertiti to be displayed in Egypt for three months."

His comments came after German Culture Minister Bernd Neumann refused to allow the bust of Nefertiti -- renowned as one of history's great beauties -- to be exhibited in Egypt because it was too delicate to be transported.

"Experts have reservations about taking Nefertiti on a long trip, which we have to take seriously," Neumann said in reaction to a campaign launched in Germany under the title "Nefertiti travels" to loan the bust to Egypt for a limited period. 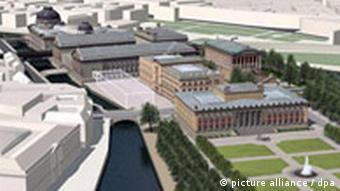 The bust is expected to stay on Berlin's Museum Island, which is currently undergoing a major renovation

Cairo and Berlin have frequently crossed swords over the limestone bust, which was unearthed by German archaeologists in an artist's studio on the banks of the Nile and taken to Germany under a 1913 agreement.

It was described by Adolf Hitler as "a true treasure."

A row broke out in 2003 when the Berlin museum allowed artists to temporarily attach the bust to a bronze statue of a naked woman.

Too old to travel? 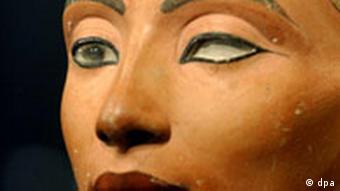 Nefertiti's gaze has fascinated Berlin visitors for almost a century

Nefertiti was the wife of Pharaoh Akhenaton, remembered for having switched his kingdom to monotheism with the worship of one sun god, Aton.

Hawass has made it his mission to retrieve Egypt's widely scattered antiquities that can be found in museums around the world.

But the Prussian Cultural Heritage Foundation, which is responsible for Berlin's art treasures, also ruled out a return to Egypt.

"After 3,000 the lady is travel weary," foundation officials said.

A German government commission has ruled that some 4,000 posters worth millions shouldn't be returned to the family of a Jew who the Nazis stripped of his possessions. The family is thinking of taking the case to court. (26.01.2007)