Merovingian treasures seized by Soviet soldiers in Germany at the end of World War II are on show for the first time in more than 60 years. But the Moscow exhibition has failed to end a row over ownership of the items. 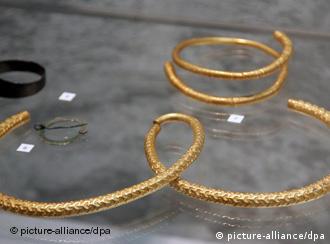 Roman golden necklaces, found in East Prussia, are on display at the exhibition

The exhibition, "Era of the Merovingians: Europe without borders" at Moscow's renowned Pushkin Museum displays some 1,300 artifacts such as collars, broaches and statuettes fashioned from precious metals.

Germany regards 700 of the pieces as Beutekunst, or trophy art, and for years has been negotiating with Russia over the return of the treasures taken by Soviet soldiers from a Berlin museum in 1945.

Russia has a more euphemistic term for the works in Merovingian exhibition -- "art stored in conditions of war." 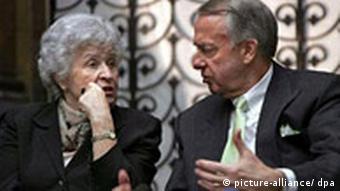 Neumann talks with Irina Antonova, director of the Pushkin Museum, at the exhibit's opening

Although the Russian museum of Saint Petersburg's Hermitage organized the event jointly with Berlin's Museum of Prehistory and Ancient History, this doesn't mean the political row over ownership is over.

The exhibits "were regarded as missing for more than 60 years," German Culture Minister Bernd Neumann said on Monday in Moscow.

"These objects are part of the world's heritage," Neumann said, adding that Germany still believed the artworks "must be returned in accordance with international law."

Sweeping aside the questions of ownership, Mikhail Shvydkoi, the head of Russia's Federal Agency for Culture was full of praise for the exhibition said that displaying the exhibits was "more important than knowing whom they belong to," and that without them, "we cannot understand the history of Europe."

The artifacts are from the Merovingian dynasty of Frankish kings, a medieval dynasty that controlled parts of modern-day France, Belgium and Germany from the fifth to the eighth centuries.

The exhibition, which opened Tuesday, runs until May 13 in Moscow, before traveling to Saint Petersburg. It will not appear in German museums, however, as "Germany cannot then guarantee the unhindered return of the objects," said Klaus-Dieter Lehmann, director of the Berlin museum.

Negotiations are progressing on the return of other pieces among the thousands the Red Army seized from Germany during World War II, Neumann said.

It's estimated Russia has almost 200,000 works of art and 2 million books were looted from Germany.

Russian law defines these objects as compensation for the incalculable damage and loss of lives caused by the Nazi invasion rather than as spoils of victory.

A new exhibition in Moscow marking the 60th anniversary of the end of WWII has reignited a nagging argument between Germany and Russia over looted art. (29.04.2005)

Germany and Russia on Monday discussed the return of "trophy art" seized by the Soviet Union after World War II. Still, Berlin has little hope of recovering a priceless Rubens painting owned by a Russian businessman. (21.12.2004)