Much has changed for the Kurds, Syria's biggest ethnic minority, since the start of the revolution. Oppressed under President Assad, they're now more confident than ever - politically, militarily, and culturally. 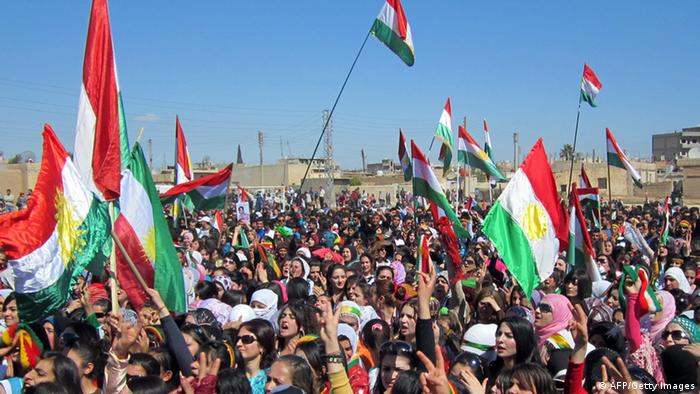 It's a mild Thursday evening in Al-Malikiyah, a predominantly Kurdish town on the Syrian border with both Turkey and Iraq. Several hundred people have come to the local cultural center - and politics is on the agenda.

Asya Muhammed Abdullah is standing at the speaker's desk, full of energy as she speaks. She is vice-chairwoman of the Democratic Union Party (PYD), the Syrian arm of the PKK, the Kurdistan Workers Party. Her eyes glow as she calls on the spectators to fight for their rights. 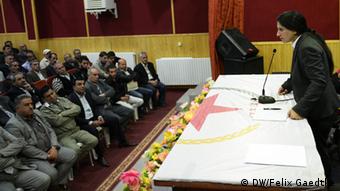 Abdullah wants her fellow Kurds to fight for their rights

Before the Syrian revolution such meetings were unthinkable. "For 30 years we Syrian Kurds have been fighting for our rights," Abdullah says. "That's why so many of our friends have been arrested and tortured to death by the regime." The ruling Baath Party denied the Kurds all basic rights. In the 1960s, 20 percent of the two million Kurds in Syria had their citizenship revoked.

But the revolution has changed all that. At the start of the revolt, Assad gave the stateless Kurds their citizenship back, in order to head off uprisings in the Kurdish regions of the country too. For tactical reasons, a section of the Syrian army was withdrawn from Kurdish areas and redeployed elsewhere.

"The revolution brought a change. We didn't start from scratch, we were ready for a solution to the Kurdish question," says Abdullah. So units of the Kurdish Popular Protection Units, the YPG, the military arm of the PYD, brought large areas of the Kurdish region under control, with the help of the PKK.

"We believe in a democratic model for the whole of Syria," says Abdullah. "Democracy is the political solution to Syria's problems. We don't want to divide Syria; we believe we can live together as brothers in a democratic Syria."

In the meantime, the PKK is negotiating with the Turkish government on the other side of the border, and that will have a decisive influence on what happens in the Kurdish areas of Syria; at least militarily and economically, the Kurds could profit from a partial opening of the border. 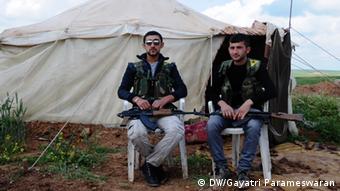 The YPG brought Kurdish regions of Syria under control

The YPG has set up checkpoints along the main road of Qamishli, the unofficial capital of the Kurdish regions. Armed young men and women inspect each and every vehicle that goes by. The barricades on the road are mainly painted red, yellow, and green, the Kurdish colors. Only in the center of town and in some districts are there still government soldiers to be seen on patrol. The area is mainly under the control of the YPG, but there are still Arab villages around where either rebel forces or government forces are in charge.

The situation is even more complicated in the border town of Ras al-Ayn, or Sere Kaniye as it is known in Kurdish. Government soldiers, rebel soldiers, YPG, and the Islamist Al-Nusra Front are all here. But YPG commander Rezan Ibrahim is calm. "We are against blood-letting and military action in Syria, but the current situation forces us to take up arms," he said. "If a government gives the Kurds all their rights in the future, then we will participate and support it." Then he adds: "But if they deny us our rights, we will use our weapons to fight for them."

Under President Bashar al-Assad, the Kurds were forbidden to speak their language or to publicly celebrate Nowruz, their New Year's Day. But the growth in political and military power has caused a renaissance of Kurdish culture.

Qamishli's "Mohammad-Shekho" culture and music center has now existed for a year and a half. Every evening, dozens of young people arrive here to learn Kurdish dancing and singing. Young singer Hussain Khate comes twice a week. He describes how dramatically the situation has changed. "Before the revolution the situation was terrible," he says. "We had to practice in secret at home, which was not only forbidden but dangerous. Things have gotten better now. We can practice together here in the center. It feels good. It is wonderful for us to be able to speak and sing in our language." 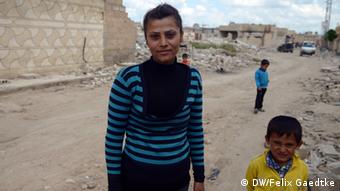 Nasrin lost her home in a Syrian government air strike

But not everything is so positive - the war is having an impact. Power outages are widespread. Garbage is piled on the streets. The prices of staple foods have risen considerably in the past two years. Medical attention is hard to come by, as most doctors have left the country. The schools are largely kept closed for security reasons. On top of that, a mosaic of different political groups makes the situation for the civilians even more difficult. The security situation is complex and often hard to comprehend.

In the last few months there have been several government air strikes on Kurdish regions. Nasrin Hamid, 26-year-old mother of three, lost her house in Sere Kaniye in one of them. "Three of my neighbors were killed, and two cousins who fight with YPG were injured," she says. "Thank God no-one was hit in my immediate family. We're starving, there's no water or electricity. Everything is broken. We have no money to buy anything at the market."

Nasrin is pessimistic about the future. Despite all the positive developments for the Kurds, she's not prepared to admit to any hope which might turn out to be false, for fear of disappointment.

Turkey very early on threw its weight behind the Syrian opposition. The fact that Assad is managing to cling to power now threatens to undermine Prime Minister Erdogan's position at home, says DW's Baha Güngör. (23.05.2013)

Both Erdogan and Obama want Assad out

While the Turkish and US leaders agree that Syria's President Assad must be ousted to end the slaughter, the meeting was by far not all Erdogan had hoped for: Obama continues to reject arming the Syrian opposition. (16.05.2013)