A journey through perspective pictures with M.C. Escher

Known for his perspective pictures and geometric lithographs, M.C. Escher is one of the best known graphic artists of the 20th century. His work is featured in his hometown, Leeuwarden, 2018 European Capital of Culture.

A staircase that leads back to itself; waterworks that move towards and away from the viewer at the same time; an impossible box: M.C. Escher's artwork featuring perspective impossibilities is world famous. To the average eye, Escher is a great artist. But for art theorists, Escher was never easy to classify.

Among professionals, Escher was considered a mathematical graphic artist rather than an artist in the classical sense of his era, a consequence of his great fascination for perspective and geometrical shapes. So instead of being invited to lecture on art, he was often asked to speak on mathematics – something he claims to know little about. 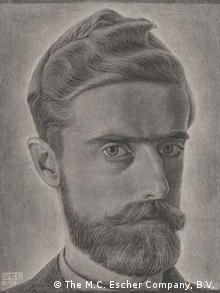 Many works on display for the first time

Born in 1898 in the North Frisian area of the Netherlands, M.C. Escher is the focus of a new exhibition in his hometown of Leeuwarden.

Starting April 28, the Fries Museum in Leeuwarden, presents "Escher's Journey," a cross-section of the travel-loving artist's oeuvre. Made possible thanks to Leeuwarden's role as a 2018 European Capital of Culture, the exhibition contains 80 original prints, 20 drawings and other photographs and objects – some of which have not been shown in the Netherlands for decades.

Escher left with his family to Arnhem when he was just five years old. He lived there until he moved to Haarlem to study architecture. One of his graphic art professors, the Portuguese artist Jessurun de Mesquita, recognized Escher's talent and continued to teach him graphic techniques such as wood and linocut even after Escher broke off his architecture study after just one week.

After 1921, the Dutchman began traveling south, repeating trips to Italy and later through the entire Mediterranean to Spain and Portugal. Traveling mostly on foot or with donkeys, he made his way to Italy, where he met his wife Jetta, whom he married in Viareggio in 1924. The couple lived together near Rome until 1935. 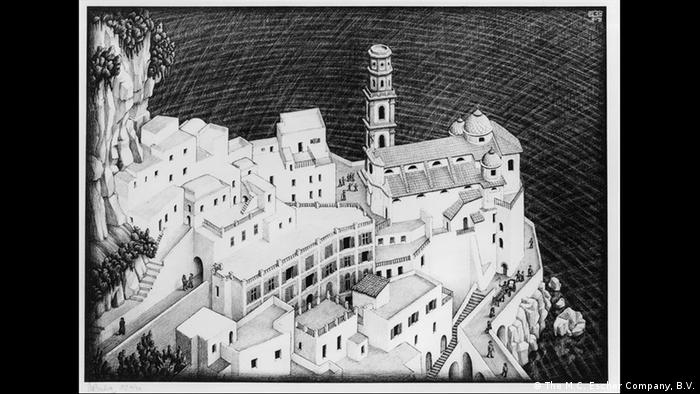 Time and again, Escher made Mediterranean villages, buildings and landscapes the focus of the sketches he printed in the Netherlands. The impressions he collected during this time, which he claimed to be his happiest, remained eternal sources of inspiration. The realistic early prints that arose out of his first travels would return later repeatedly, for example, the images of village Atrani on the Amalfi coast, which is also seen in 1937 in the first print from his "Metamorphosis" series.

On a trip to southern Spain, Escher visited the Alhambra and grew fascinated by the medieval mosaic art of the Moors. As a result, he worked intensively in the style until the end of his life, filling in uniform shapes and partial areas, within which he added in his own graphics and drawings, populating them with fantastic figures. Escher drew a total of 137 surface patterns.

His masterpiece is the "Metamorphosis," in which birds become fish and people transform into buildings. 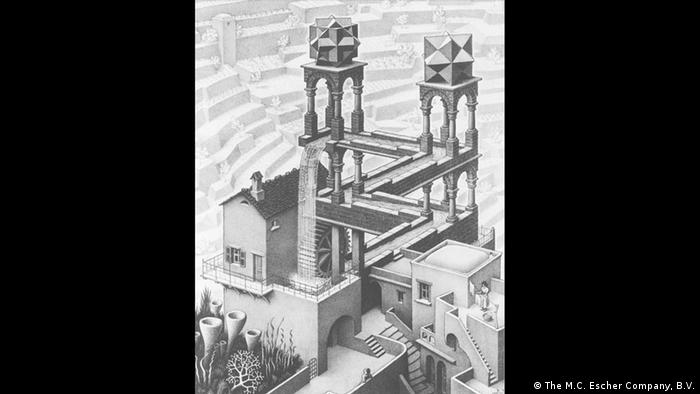 "Waterfall" (1961), one of Escher's best-known works due to its use of perspective

Escher has gained such a wide audience as a result of his mathematical prints, as he played with perspectives and produced impossible constructions. These later works included "Ascending and Descending," "Relativity," "Waterfall" or the "Drawing Hands," in which elements of the image are to reproduce each other.

They are on display through October 28, 2018 as part of the "Escher's Journey" exhibition at the Fries Museum in Leeuwarden. Many events featuring the hometown hero will take place throughout the year. "Phantom Limb: Art Beyond Escher" is a simultaneous exhibition featuring installations by contemporary artists who, like Escher, challenge objective perception by turning things upside down.

Leeuwarden in the northern Netherlands and Malta's capital Valletta are the European Cultural Capitals of 2018. Their approaches to culture, however, could hardly differ more. (28.12.2017)

You won't believe your eyes when you look at these artists' works. Illusionists M.C. Escher, street artist Leon Keer, and others turn optical illusions into art. It takes a second look to see what's really there. (27.03.2018)

A fascinating world traveler and master of illusion, M.C. Escher is the focus of "Escher's Journey," a new exhibition at the Fries Museum in Leeuwarden which includes lesser-known works by the famous artist. (27.04.2018)