A frosty meeting in Vilnius after EU snub | Europe | News and current affairs from around the continent | DW | 29.11.2013

A frosty meeting in Vilnius after EU snub

Ukrainian President Viktor Yanukovych turned down the European Union at the last minute under Russian pressure. But he has still come to the Vilnius summit - with some hoping for a last-minute change of heart. 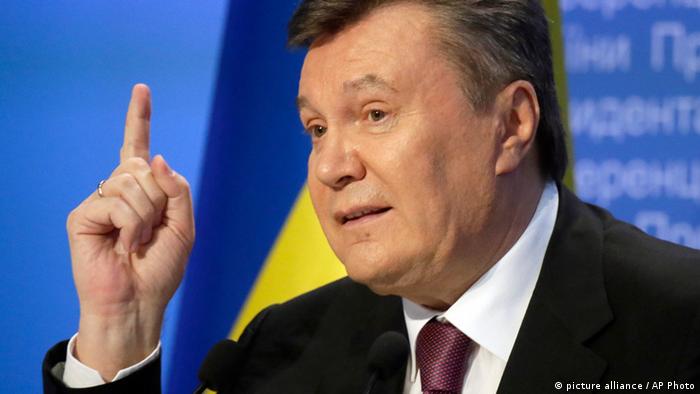 The most important project of the Vilnius summit now looks unlikely. The European Union planned to sign an association and partnership agreement with Ukraine at its meeting in the Lithuanian capital. This would have offered the most important country in the EU's Eastern Partnership a path toward membership.

But only a few days before the summit, the Ukrainian government made a U-turn and dropped all its preparations for the agreement. Russia had threatened Ukraine with trade sanctions, letting it know it would pay dearly for any rapprochement with the EU.

Ukrainian President Viktor Yanukovych subsequently complained that the EU should have offered his country more. He tried a new tack, suggesting tripartite negotiations with the EU and Russia as a compromise, which the EU rejected. The summit will therefore take place without its planned centerpiece. 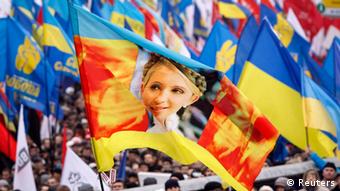 But Yanukovych has still come to Vilnius. Some participants still hold out hope he will sign the agreement. And the door is still being held open for him. But such a step seems unlikely. As a condition of closer ties to the EU, Yanukovych was supposed to release imprisoned opposition leader Yulia Tymoshenko, who wants to come to Germany for medical treatment.

But Tymoshenko is still sitting in jail - which the EU considers a politically motivated miscarriage of justice. Tymoshenko's daughter Yevhenia said in Vilnius that it was "clear and evident that Yanukovych took off the mask of a seemingly pro-European leader and showed the face of an authoritarian ruler."

It is neither clear nor evident that German Chancellor Angela Merkel will meet with Yanukovych, but if she does, she is likely to remind him of his unkept promises. It will not be an easy time here for Yanukovych.

The promise of prosperity 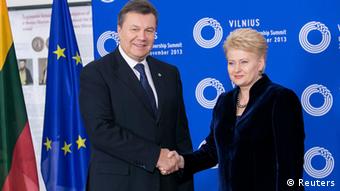 Except for the offical handshake, Yanukovych has had a chilly reception in Vilnius

So what comes next? Disillusionment has taken hold among European politicians. And many are asking what consequences the EU should draw from the turn of events.

Elmar Brok, German member of the European Parliament and chairman of its Foreign Affairs Committee, worried that the EU had not made its case. In an interview with Deutsche Welle, he said, "It must be made much more clear what the benefits of the European Union are - not only upholding democracy and the rule of law."

But alongside worries that their support for Ukraine had not been expressed clearly enough, strong words have also been spoken. Swedish Foreign Minister Carl Bildt rejected the argument that Yanukovych had no choice in the face of Russian threats and an insufficient European commitment: "The Eastern Partnership is not a bazaar where you can [haggle over] billions and then go for the best offer. That was never the intention. That will never be the case." 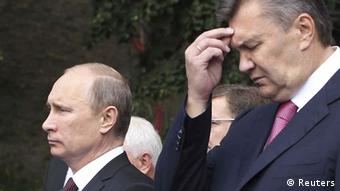 But the EU is also taking pains to stress the Eastern Partnership is not directed against Russia. "In the long term, one of the main beneficiaries of this policy is going to be Russia itself, because Russia is one of the countries that really needs modernization," Bildt said.

The Russian government, of course, sees things very differently. Moscow evidently believes the Eastern Partnership is an attempt by the EU to snatch some of the former Soviet republics away from its sphere of influence.

Cold comfort for the EU that two Eastern partner countries - Moldova and Georgia - really want to join Europe. The pair are the star pupils of the partnership. The rest, however, are balking.

Brussels has even been unable to make progress with Azerbaijan and Armenia. And because Belarus under President Alexander Lukashenko is considered Europe's most politically backward country, it has never really participated in the program.

An agreement with Ukraine would have given the partnership new impetus. But now, that no longer seems likely.

The EU Eastern Partnership Summit in Vilnius could have been a turning point for Eastern Europe. But Moscow's pressure on Ukraine has raised questions about the future ties between the six countries and the EU. (28.11.2013)

The EU: a behemoth with an image problem

Despite Ukraine's decision not to sign an Association Agreement with the EU, experts say the bloc remains attractive to European countries. But the union does need to work on a growing image problem. (24.11.2013)