Some tradition-loving Americans have got into a bit of a pickle over their Christmas facts. The word on the festive US grapevine is that come Dec. 24, Germans hide an ornamental glass gherkin on their trees. 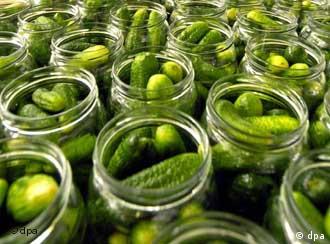 Something savory for the tree?

An amusing legend has apparently found a place in the collective imagination of the American people -- and into the cash registers of American retailers.

The story goes a little like this: On Christmas eve, German mommies and daddies send their children to play in the snow or to snuggle up by the fireside reading books and eating Lebkuchen, whilst they unpack the box of glittering glass ornaments to hang from the freshly felled tree.

They cover the tree in ribbons, bows, apples, nuts and shiny decorations before turning their attention to the pickle. So special is its place in the sparkling ranks of glass ornaments, that it's hidden among its lesser contemporaries for the gleeful wee ones to find.

The finder is rewarded with the ultimate yuletide thrill of being allowed to open the first gift. 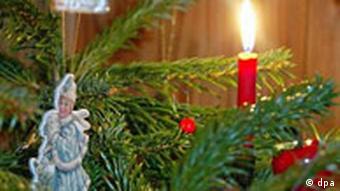 Among candles and angels, there must be room for a pickle

It's a quaint and wholesome tale, but as tall as the average German tannenbaum. In Germany at least. At the far side of the Atlantic, Americans are blissfully ignorant that the tradition in which they so believe and delight is not a slice of imported magic but of pure fabrication.

And there is no consensus about where or how the story was born, although the range of possible explanations include the idea that the spherical shape of truly traditional hand-blown glass ornaments gradually become elongated and acquired a pimpled surface. A more obscure version of events has St. Nikolaus rescuing two helpless young Spanish boys who were locked in a pickle barrel by a wicked old thief.

If nothing else, this tale of Teutonic tradition has fairytale financial implications for all those involved in what has become a seasonally booming business.

Groups in Germany and Austria have launched campaigns protesting the commercialization of Christmas. The target of their ire is Santa, an American import who they say doesn't represent what the holiday is all about. (Dec. 20, 2004)

Take a look at a collection of our best "And Finally" stories.