Germany's media landscape is defined by a mixture of public and private stations. 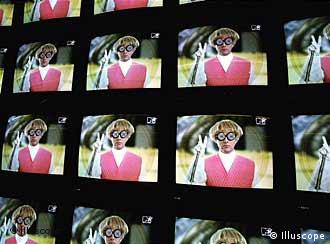 Television: a true luxury in Germany.

At the end of World War Two, the media system in what became West Germany was reorganized. The press was placed in the hands of the private sector, while broadcasting came under public law.

The first organization to take up radio and television operations was the Association of Public Broadcasting Corporations in the Federal Republic of Germany (ARD) in 1951. A Program Conference consisting of 10 public regional stations coordinates ARD's joint TV program, called Channel One.

Initiatives for establishing a second television network soon followed. Critics claimed the ARD program was politically-biased and a monopoly. In 1961, the federal states founded the Zweites Deutsches Fernsehen (ZDF), or Channel Two.

In contrast to the state broadcasting corporations, ZDF is organized centrally in Mainz as a company under public law. It is a television-only station and transmits nationwide.

The public law system was chosen for broadcasting in order to ensure its independence from the government.

Both ARD and ZDF are supervised and administered by broadcasting councils. They include representatives of the state and federal governments, but also various major organizations and social groups. The latter represent the interests of the general public.

But political parties or groups do influence a broadcaster, since the council's members are elected either by the state parliaments or nominated by political parties. So a station is often termed "red" or "black". These colors depend on whether a broadcaster is based in a state where the Social Democrats ("red") or the Christian Democrats ("black") hold a parliamentary majority.

For a long time, the development of private broadcasting in Germany was hotly disputed in the federal and state parliaments. The public broadcasting corporations also put up sharp resistance to it.

Commercial channels were introduced in 1984. In 1986, a Federal Constitutional Court ruled in favor of a regulated dual public-private broadcasting system. The court stipulated that the two sectors must be able to compete with each other without interference from the authorities.

The largest private companies in Germany are RTL, SAT 1 and Pro 7. There are also two pay-TV providers, DF1 and Premiere.

The Fall of the Berlin Wall, and with it, the German Democratic Republic (DDR) in 1989 didn't change the landscape much. Former communist broadcasters were ordered shut down. A new broadcaster, Central German Broadcasting (MDR), was created in Leipzig and later joined ARD.

Financed by the users

Whether public or private, television is a costly past-time in Germany. Every person who has a radio and/or television set must register it with a central revenue office. These obligatory fees are the most important item in the public broadcasting corporations’ budget.

The current monthly fees for a radio and a TV set total 16.15 euro ($14). On top of this, cable network operators, such as Deutsche Telekom, charge extra fees for connection and use.

Private stations mainly finance themselves through advertising. But the public broadcasting corporations are free of commercials after 8 p.m. on weekdays, and during all of Sundays and public holidays.

Click on About us, at the top of the page to learn more about Deutsche Welle.

Liberty Media wants its share of the German television market.