A challenging future for Iraqis as US troops depart | World | Breaking news and perspectives from around the globe | DW | 22.12.2011

Iraq faces major challenges following the withdrawal of US troops. The basis for an independent nation is in place. But whether it will carry a democratic foundation is far from certain. 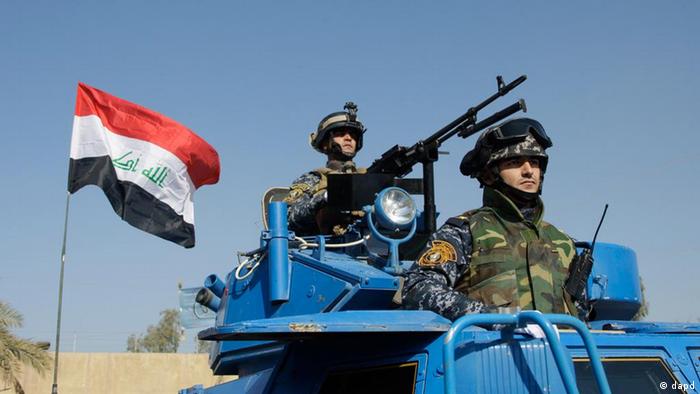 US forces have handed over to the Iraqis

An Iraqi lieutenant colonel called the US pullout from Iraq a "day of rejoicing for all Iraqis." His joy is understandable. Almost nine years after the US Army invaded, Iraqis have now taken over the responsibility for their nation. For a long time, many Iraqis have yearned for this task. But it is a challenge for the entire country.

Political consolidation domestically and establishing social structures will be decisive for the future of Iraq, said Volker Perthes, Middle East expert and director of the German Institute for International and Security Affairs in Berlin.

"The question is whether political groups, factions, parties, clan and regional representatives can at least agree on adhering to the formal rules of democracy, and allow everyone to participate," Perthes said.

The government of Prime Minister Nouri Al-Maliki tended to exclude significant groups from the political process - and therefore operate undemocratically, he said.

Social welfare is just as important. The money earned in the country will have to be distributed accordingly. The financial basis already exists. Iraq now produces a similar amount of oil as it did before the war began. But not everyone is benefitting from it yet. This is a problem which the Iraqis will have to deal with themselves in the future. 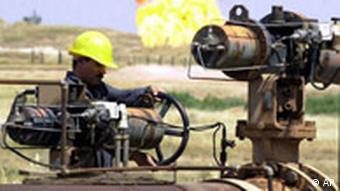 Iraq's oil production is almost back to pre-war levels

"In the past years, everything that went wrong was blamed on the Americans," Perthes said. "The US did in fact carry a lot of the responsibility and blame. But it was ultimately also Iraqi factions and groups that let loose on each other."

Iraq has been and still is marked by a long lasting civil war, countless attacks by the terrorist network al Qaeda and conflicts over the oil-rich areas of the country. Following the US invasion and the fall of Saddam Hussein in 2003, the country descended into chaos.

Instead of a democratic reform and economic upswing, the upheaval led to a bloody uprising against the occupation troops and conflicts between ethnic and denominational groups - causing a catastrophic security situation. People were being killed almost everyday. Estimates of civilians killed between 2003 and 2008 vary between 100,000 and one million. In addition, millions fled to the neighboring countries Syria and Jordan.

Between 2004 and 2008 in particular it appeared as if suicide bombers and terrorists had the country firmly in their control. Then the US changed its strategy and stationed more troops in Iraq, at times up to 170,000 soldiers. Over the past three years, the situation in Iraq has stabilized.

"The extremist underground has been strongly pushed back," said Henner Fürtig, director of the GIGA Institute of Middle East Studies in Hamburg. "It hasn't completely disappeared, but it isn't a countrywide phenomenon anymore." Following the withdrawal of US troops, over 900,000 Iraqi army and police forces are supposed to guarantee the country's security.

Despite the serious problems Iraq faces, it has in the past few years managed to pass a democratic constitution and hold national elections. According to Fürtig, this is quite a positive development.

"With all of its problems, difficulties and sacrifices which the country has experienced since the US invasion, Iraq as a whole is better positioned in 2011 than it was in 2003, not least because one of the bloodiest dictators in the Middle East was swept aside," Fürtig said. 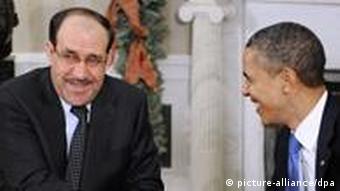 Maliki and Obama hailed the "new chapter" in Iraq

One of the major challenges for Iraq will probably be positioning itself in foreign and regional affairs.

"If Iraq is supposed to take its time to develop, it's important that it maintain good relations to all of its neighbors," Perthes said. With its Shiite majority in the population, Iraq traditionally has strong ties to the predominantly Shiite Iran. But as an Arab nation, Iraq also can't ignore the interests of the prevalent power in the Persian Gulf: the predominantly Sunni Saudi Arabia.

"The rivalry between Iran and Saudi Arabia is now taking place on Iraqi soil," Fürtig said. Each side is seeking partners to fortify its political interests - and allowing them to act against each other in Iraqi politics.

"Ultimately, Iraq is a fundamental venue of the Saudi-Iranian rivalry," Fürtig said. But it's up to Iraq itself to decide which path it wants to take - and how democratic it will be.

Iraqi Prime Minister Nouri al-Maliki fears that the fall of the Syrian regime could spark an internal sectarian war which could expand into a wider conflict in the Middle East between Sunni Muslims and the Shia sect. (12.12.2011)

US President Barack Obama has announced that American troops are due for a full withdrawal from Iraq at the end of the year. Washington claims that the country is now ready to take responsibility for its own security. (22.10.2011)

Iraq says it can now take care of itself