25 Years After Greens Upset German Politics, Left Does the Same | Germany | News and in-depth reporting from Berlin and beyond | DW | 06.03.2008

25 Years After Greens Upset German Politics, Left Does the Same

The Green party entered Germany's parliament a quarter of a century ago, fundamentally changing the country's party landscape. This year's anniversary comes as the Left party is on its way to doing the very same thing. 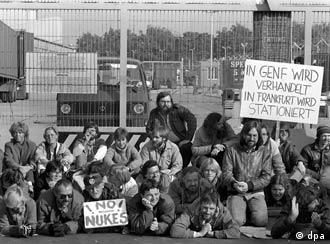 In the early days, the Greens were a protest party

Twenty-eight Green parliamentarians took their place in the Bundestag on March 6, 1983, heralding in a new era for the environmentalist party at the federal level and the birth of a four-party system in West Germany. The conservative CDU/CSU sneered as the newly elected parliamentarians, in long beards, overalls and woolly sweaters, reveled in their new roles as the people's representatives.

As in the case of the Left party today, the Greens had been dubbed a protest party and political actors debated fiercely whether the established parties dared forge alliances with them. But they had won 5.6 percent in federal elections and could no longer be discounted. 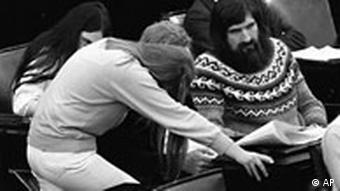 The Greens' presence in the Bundestag signified a cultural revolution

The party had been born only three years previously out of a number of protest movements, drawing support not only from young voters, but from a broad swath of society.

The three-party system of the conservative CDU/CSU, the unionist Social Democrats (SPD) and the free-market liberal Free Democrats (FDP) became a four-party system.

In the early days, the Greens' politics were marked by doomsday scenarios: fears of nuclear war and the effects unchecked capitalism on nature. German reunification and the resulting merger of the West German Greens with the East German civil activist group "Alliance 90" were historical turning points that shifted the party towards consolidation into a "real" party.

Controversial issues during the Greens first legislative period, such as pacifism or the ability to govern, lost their explosiveness over time. Concurrently, political realists within the party, called "Realos," gradually gained the upper hand in opposition to environmental socialists, called "Fundis," an abbreviation for fundamentalists. 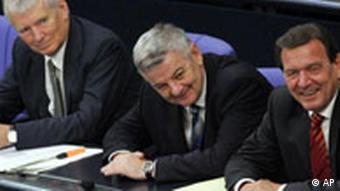 The Greens' early years in the Bundestag are now viewed as their adolescence. By 1988 at the latest, when Joschka Fischer joined Social Democrat Gerhard Schröder's cabinet as foreign minister, the party had become a fixture in Germany's party system.

Now the Left party, a new alliance comprised mainly of ex-communists and disaffected former Social Democrats, faces similar resistance to what the Greens experienced in the early 1980s. Rejected by the CDU/CSU and the FDP as a band of reactionary communists, the Left is viewed as a threat to the center-left SPD.

But with 53 seats in the 612-member strong Bundestag and representation in 10 of Germany's 16 state parliaments, they're the new political force that can no longer be ignored.

The leader of the Social Democrats in the state of Hesse signaled a significant shift in German politics by saying she would hold talks with the Left Party. But her main opponents want her to consider a grand coalition. (05.03.2008)

German politicians and public opinion polls are increasing the pressure on Kurt Beck, leader of the Social Democrats (SPD), over his decision to approve cooperation with a far-left party. (01.03.2008)

The success of the Left party in recent state elections has established parties considering unconventional partners. Political expert Gero Neugebauer said he expects Germany to have a five-party system by next year. (26.02.2008)

Do you think it's only a matter of time until the Left party is also recognized as a legitimate political force? Send us an e-mail. Please include your name and country in your reply.