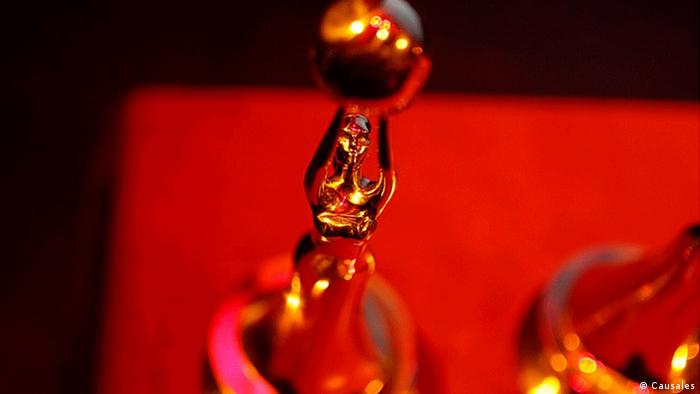 The trophy for the Cultural Brand Awards is called the Aurica

The award ceremony was an unusual event in unusual times: On the evening of November 26, the Cultural Brand Awards were presented in the Nikolaisaal concert hall in Potsdam, near Berlin. The digital broadcast, with a small group of prize winners, speakers and organizers, could be watched from all over Europe.

Created in 2006 and awarded this year for the 15th time, the Cultural Brand Awards honor innovative marketing ideas in the culture sector and distinguished culture projectsacross Europe, even in this difficult coronavirus pandemic year.

In 2020, 112 entries were submitted to the awards, from regions, institutions and individuals active in the culture scene all over Europe.

The cultural prize is supported by DW, too, and awarded by a 42-member jury of experts in eight categories.

'And the winner is… the European Union Youth Orchestra'

"Three great finalists, and one great winner of the grand prize!" said Rolf Rische, head of the DW culture and lifestyle department and head of German TV programming, announced the winner of the European Cultural Brand of the Year 2020: the European Union Youth Orchestra (EUYO).

The two other contenders in the European Cultural Brand of the Year category were the Mozarteum Foundation Salzburg and the European Hanseatic Museum Lübeck. 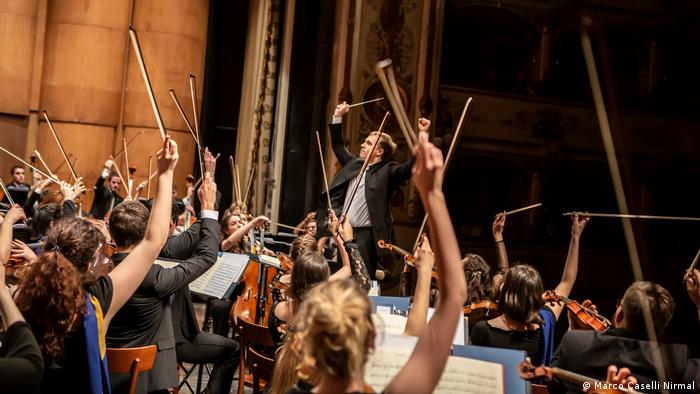 The European Union Youth Orchestra is made up of young European musicians from all EU nations. Founded in 1976, it is one of the oldest international youth orchestras in the world. It has played over a thousand concerts on five continents, with principal conductors including Claudio Abbado and Vladimir Ashkenazy and guest conductors like Herbert von Karajan, Daniel Barenboim and Leonard Bernstein. Vasily Petrenko has been directing the EUYO since 2015.

'An award for Europe'

The idea behind the orchestra: together, young musicians from all 27 EU member states create a common musical project. Every year, 160 musicians are chosen from among thousands of applicants. The candidates are between 16 and 26 years old, and they present themselves to a jury in their respective native countries. The musicians chosen to join EUYO are the best of the best. 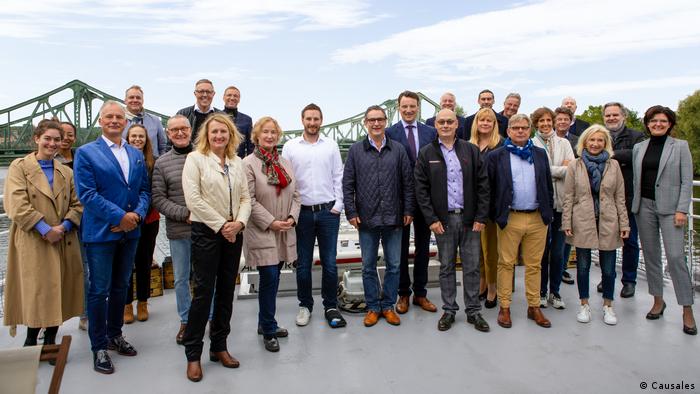 The jury of the Cultural Brand Award

"Above all, this award is an enormous confirmation of the orchestra as a European project," EUYO director Marshall Marcus told DW. "It is proof that the principles of unity and diversity continue to work in these challenging times," he said, adding that the award is not only for EUYO — "this is an award for Europe."

Prizes are awarded in 7 other categories besides Cultural Brand of the Year. "We received entries from Austria, Switzerland, France, Sweden, Finland, Denmark, Lithuania, Belgium, Norway, Italy, England, Portugal, Ukraine and the Netherlands," said Hans-Conrad Walter, the manager who coordinates the Cultural Brand Award. "I believe that shows that the award is a good reflection of Europe's cultural diversity and the cultural potential in our society."

Distinguished in the culture sector

The Deichman Library in Oslo won the 2020 European Trend Brand prize. According to the jury, it is "an archive of the culture of the entire country."  The Konzerthaus Blaibach and the Royal Danish Theater were also nominated for the prize. 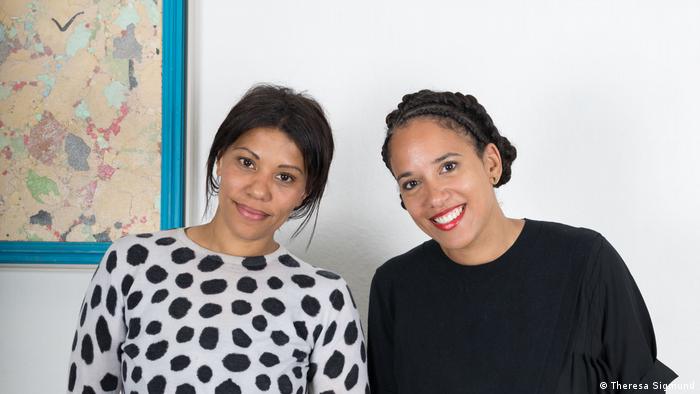 The Afro-German art historians Yvette Mutumba and Julia Grosse, co-founders of the Contemporary And (C&) and the Contemporary And America Latina (C& AL) platforms, were named European Cultural Managers of the Year 2020. According to the jury, they both succeed in "making highly complex content of contemporary art productions from Africa, South America and its global Diaspora accessible through local writers."

In the category European Cultural Investor of the Year, Deutsche Post DHL Group won with the "BTHVN on Tour" project, a traveling exhibition on the occasion of Ludwig van Beethoven's 250th birthday that provides insight into the composer's life and work. Since 2019, the exhibition, developed in cooperation with the Beethovenhaus Bonn, has been touring concert halls in Europe and the US and is currently on view in Russia. 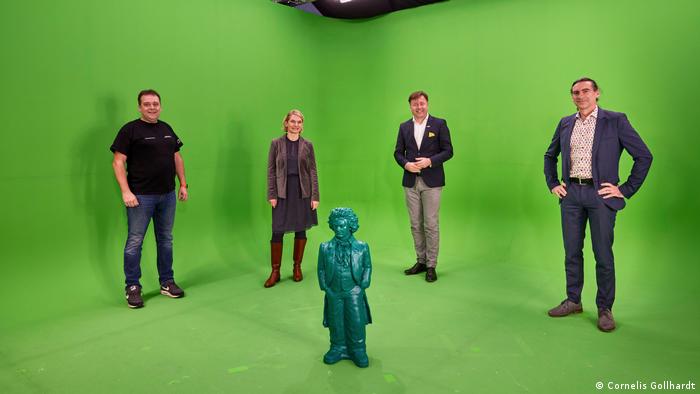 An innovative Eastern European institution, the Center for Urban History in the Ukrainian city of Lviv won an award in the category Best Educational Program.

The title of European Cultural Tourism Region was awarded to Le Voyage a Nantes, a short trip concept that makes it possible to experience the French city and its region "via an artistic intervention."

The Monheimer Kulturwerke won the prize for urban culture, and in the Hamburg-based FUTUR 2 FESTIVAL won this year's prize in the category European Prize for Sustainability in the Cultural Market, proving that "culture, sustainability and ecstasy" can go hand in hand.

'Now is the time for opportunities'

Leoluca Orlando, mayor of the Sicilian city of Palermo, accepted the Lifetime Achievement Award from home as he could not travel to Potsdam. Orlando was honored for cultural initiatives to fight the Mafia and racism, as well as for his refugee policies. He invigorated urban culture in Palermo and initiated ambitious programs to save run-down neighborhoods. 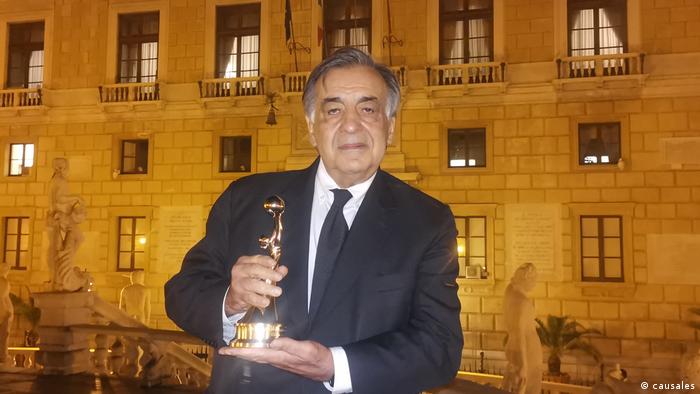 Leoluca Orlando fought against the mafia and for migrant rights

Michelle Müntefering, responsible for international cultural policy at the German Foreign Ministry, was this year's patron of the European Cultural Brand Award. The Chinese character for crisis consists of two symbols, for danger ("wei") and opportunity ("ji"), she said. We have learned more than enough about the dangers of the current coronavirus crisis over the past weeks, she said in her welcoming address, and added. "Now is the time for the opportunities."

The crisis has also released a lot of creative energy, Müntefering said. "Culture in particular can and must be a motor for change towards a sustainable society."

The original version of this article is in German; adapted by Dagmar Breitenbach.