100,000 without drinking water in the Maldives

The Maldives has declared a state of emergency after a fire in its capital's sole water treatment plant left residents without drinking water. India has responded to the crisis with a bottled water delivery. 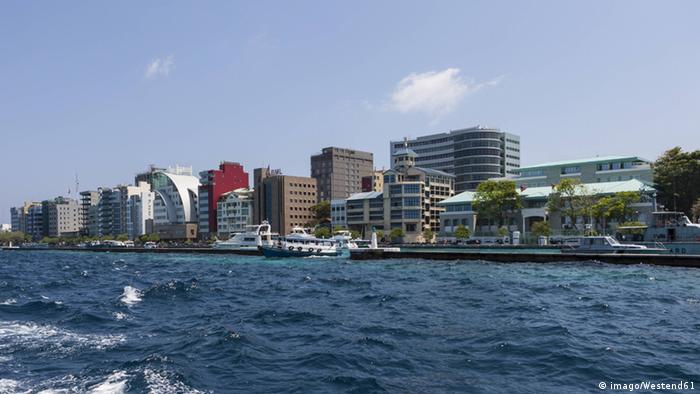 Scuffles broke out in Malé, the Maldivian capital, as desperate residents fought to buy up bottled water. The city is located on a low-lying island in the Indian Ocean that has no natural water source and depends entirely on treated sea water.

Damage to the city's sole water treatment plant caused by the fire, which happened on Thursday, has left around 100,000 people without safe water to drink from the tap, government minister Mohamed Shareef announced on Friday.

The Maldivian government declared a state of emergency and has appealed for aid from India, Sri Lanka, the US and China.

India has already begun airlifting supplies onto the island. "Last night, the Maldives foreign minister contacted us saying they were facing a grave emergency," said Indian foreign ministry spokesman Syed Akbaruddin. "For the next seven to eight days they are going to face extreme difficulty with water so they requested all assistance."

Akbaruddin announced that India would be sending five planes carrying water and two ships with parts to help repair machinery at the water treatment plant where the fire took place. Maldivian government Minister Mohamed Shareef said that it may take days before the treatment plant is back in operation.

Bottled drinking water was provided free of charge by the government but most of the island's residents were left without enough water to wash.

Around 120,000 people live on the island which measures just two square kilometers (one square mile), making it one of the most densely populated areas in the world.

The Maldives, a group of 1,190 coral islands southwest of India, is dependent on its luxury tourism industry, which makes up around a third of its gross domestic product.

The water shortage has not affected the country's upmarket tourist resorts, which by law have their own water desalination plants.

Travelers continue their throbbing love-affair with Germany, as the country’s tourist sector looks headed for a fifth consecutive record year. But critics warn that new industry taxes could reverse the trend. (11.11.2014)