Thousands of young Zimbabweans have marched in Harare in support of President Robert Mugabe. Zimbabwean human rights activist Dirk Frey called the march a waste of time, energy and money. 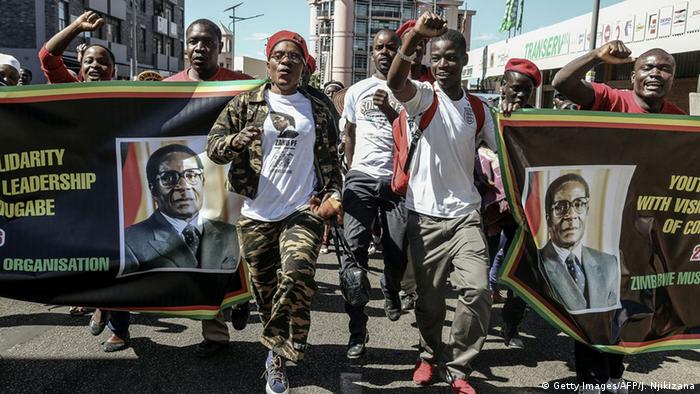 Tens of thousands of Zimbabweans took part in the march through the capital, Harare, in support of veteran President Robert Mugabe.

The marchers, many of whom were transported to the city by bus, sang songs praising Mugabe and wore t-shirts displaying his image as they gathered at a central square to hear him address the crowds. Mugabe, 92, has ruled Zimbabwe since independence in 1980. He has vowed to stand again as president in elections due in 2018.

The march in the southern African nation took place while many Africans across the continent were commemorating the foundation of the former Organization of African Unity (OAU), now the African Union (AU). In an interview with DW, the chairperson of the movement Occupy Africa Unity Square (OAUS), Dirk Frey, called on Zimbabweans to raise their voices against the current regime.

DW: The ruling party ZANU-PF planned to march in solidarity with the leadership of President Robert Mugabe at the same time as we commemorate Africa Day. What is your take on this march and the timing?

Dirk Frey: Africa Day is supposed to celebrate African unity, but what unity is it today when each African state is focused on its own little petty issues? For example, Zimbabwe and Zambia share the Kariba hydro electric power facility, yet we have Zambia abusing that facility and draining the lake, while our government who is supposed to represent and protect our interests has just been sitting and watching. So, it shows that in terms of practical cooperation, there isn't anything really to celebrate. As much as ZANU-PF might talk about how they are representatives of Zimbabweans, this one million man march thing is simply a rather petty and ridiculous partisan project by a section of youths who have a clear political agenda. I mean, it's a mockery of the original million man march which was the American civil rights movement pushing for the rights of black Americans. So what rights are they pushing for [today]? Instead, they are gobbling up $600,000 (537,000 euros), A hospital just down the road has been going for days without water. A hundred dollars can buy 10,000 liters of water from the private sector. So this is an absolute waste of time, energy and money.

As a a young Zimbabwean, what would you want to see happening in terms of leadership as we go forward?

First, it's critical for us to move away from this obsessive focus on President Mugabe. The man is well past the age of retirement and we need to be looking at the broader picture. 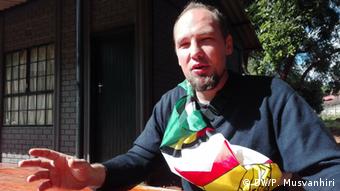 As Zimbabwean youth, we form nearly 70 percent of the population. We are the current generation. In terms of majority rule, we are the majority. Yet if you look at the voters' roll – youth forms less than 20 percent of that roll. This means that we don't have a voice. We are not represented in parliament, in government or at national level. We have been raised in a mentality of fear and apathy in the belief that as an individual Zimbabwean,I don't have a voice and I shouldn't speak out. This is the problem that we face. As a generation, now is our time. It is our nation, our future and our children's future. We do not only have the opportunity but I strongly believe we also have the duty and responsibility as young Zimbabweans to roll up our sleeves and turn this ship around.

But how do you do that?

As OAUS, our message has been clear from the beginning: that this government has failed in its mandate and its responsibility to the people. When politicians fail, when they stop listening, that's when citizens need to become more vocal and stand up and raise their voices louder to say to politicians "You are accountable to us."

How do you think Zimbabweans should organize themselves in terms of having their voice being heard by the government?

I and the organization I'm part of are very strong believers in people power. Nobody can stand against a people united. First, Zimbabweans must find their voice and they are doing that. They must shake off those shackles of fear and be brave enough to speak out - and that is happening now. Then what needs to happen is that Zimbabweans need to realize that we are not simply individuals who stand alone because as an individual you can be silenced. We are a people and it is a high time for us to unite and to join our voices. Once that happens, there are mature, intelligent and visionary leaders among us who will tell people "Look, this is the best way of going about it," and then the people will follow that leadership or they will tell that leader "No, you're wrong, we will follow someone else." But the bottom line is non-violence.

I have heard one or two voices talking about the barrel of the gun, that's nonsense. From an ideological point of view, people have already fought and died for Zimbabwe to be free. If we have to fight and die again, we are basically spitting on that sacrifice. Violence breeds violence. The more we engage and respond to violence with violence, the more we will be trapped in that cycle - for years, decades and generations to come. So the answer is to fight fire with water, is non-violence, and we have seen it work all around the world. There is a proven historical track record of non-violent direct action being very successful, fast and more effective, and leading to fewer casualties.

Dirk Frey is the chairperson for the movement Occupy Africa Unity Square (OAUS) based in Zimbabwe.

Young people marched in Zimbabwe to show their support for 92-year-old President Mugabe. But what do young people really feel about the man who has ruled the country for 36 years? (24.05.2016)

Free media in Africa faces many challenges. These include colonial-era laws that restrict free thought and expression and are holding the continent back. (28.04.2016)