#ThisFlag: Facebook video starts wave of dissent in Zimbabwe | News and current affairs from Germany and around the world | DW | 25.05.2016

Using the national flag as a symbol of the country's hardships, a Zimbabwean pastor launched a viral campaign on social media. Though he did not explicitly attack Mugabe, government forces dismissed it as a "stunt." 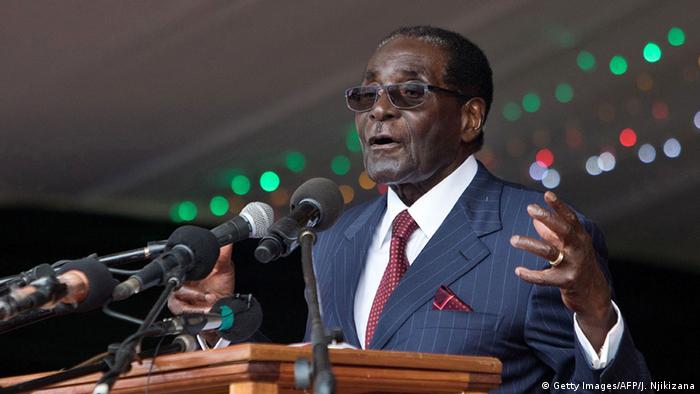 In Zimbabwe, a passionate video by a charismatic pastor kicked off a social media movement that has now become a rallying cry for opponents of President Robert Mugabe, in power since 1987, and his ruling ZANU-PF party.

Locally renowned author and pastor Evan Mawarire uploaded a video to Facebook, where, wrapped in the Zimbabwean flag, he called on viewers to take action and help bring the country out of its current difficulties.

In the video, he used the colors of the national flag as symbols: the green for the country's crops, the yellow for its mineral resources. Mawarire wondered where the crops themselves and the profits from diamond sales had gone.

Posted on April 20, a day after Zimbabwe's independence day, Mawarire’s "little rant," as he described it on Twitter, got over 100,000 views in five days, with many echoing the pastor’s concerns in the comments.

Faced with such strong response, Mawarire took to Twitter and Instagram, calling on Zimbabweans to post pictures of themselves wearing or waving their national flag. Many did:

Even the American ambassador, Harry K. Thomas became involded, wondering if the movement could spread elsewhere.

Though Mawarire’s original video did not contain any direct mention of Robert Mugabe or the ZANU-PF, many Zimbabweans have since used the hashtag to take explicit stabs at their government, accusing it of corruption and inefficiency.

The pastor’s own posts also grew increasingly political and explicit, as he encouraged Zimbabweans to carry the protest into real life by carrying a national flag with them wherever they went during the first week of May.

In an interview with a local news station, Mawarire made it clear that he was "not asking for the throwing down of [Zimbabwe’s] government, or anything," adding he was only calling on his compatriots to "make a statement."

The flag campaign irked the ruling ZANU-PF, which was prompt to dismiss it as a political "stunt," as it was described by Jonathan Moyo, Zimbabwe’s education minister.

Moyo himself attempted to come up with another hashtag in response to Pastor Mawarire’s, coining the counter-hashtag #OurFlag that was then picked up by supporters of the ruling ZANU-PF party.

Mawarire has since defended himself and the intents of his campaign, insisting that his movement is peaceful and denying he ever intended to form a political movement out of it.

His critics accuse the pastor, however, of political opportunism, publicity-seeking - and even suggest he's a foreign agent for the West.

Zimbabwe’s political establishment has continued to use the #OurFlag response hashtag as a way to promote a pre-planned mass rally scheduled to take place this Wednesday (May 25), to coincide with Africa Day - the anniversary of the foundation of the Organisation of African United, now the African Union, in 1963.

Thousands are expected to attend the mass gathering, dubbed the "Million man march," in what is intended to be a show of support by the country's youth for an aging Robert Mugabe, 92. Mugabe is being increasingly and openly criticized by Zimbabweans, and as the party is said to be divided the eventual succession.

A recent slump in commodity prices has hit the Zimbabewan economy hard. Roughly four in five Zimbabweans are unemployed. Simultaneously, as the El Niño weather pattern is causing an unprecedented drought, threatening close to four million people with famine, according to humanitarian agencies.

Dissent is marching on in Zimbabwe

One million young people are marching in Zimbabwe to show their support for 92-year-old President Mugabe. But what do young people really feel about the man who has ruled the country for 36 years? (24.05.2016)

The El Nino-induced drought has left around 28 million people across southern Africa in need of food aid. Elhadj As Sy has been assessing the drought’s impact in the region. (17.05.2016)