The former first lady of Zimbabwe, Grace Mugabe, is suspected by wildlife officials of having smuggled ivory worth millions of dollars. The wife of ex-President Robert Mugabe was once tipped to lead the country. 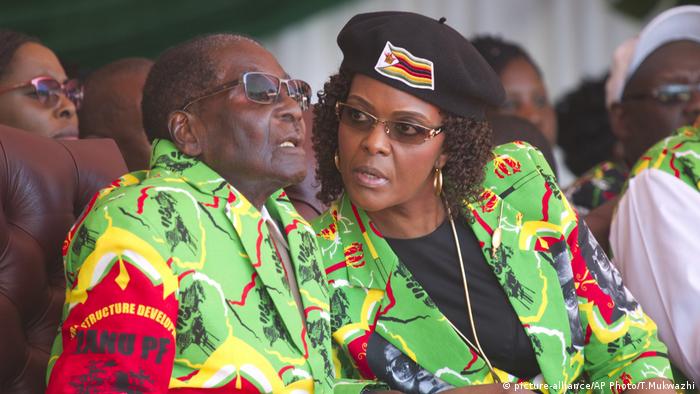 Grace Mugabe, the wife of former Zimbabwean ruler Robert Mugabe, faced accusations on Sunday that she had raided the country's ivory stockpiles during her time as first lady and sent pieces as gifts to high-profile individuals in the Middle East and Asia.

Mugabe is alleged to have smuggled the ivory under the pretext of giving diplomatic gifts.

The investigation into the former first lady was initially reported by Zimbabwean state-owned weekly The Sunday Mail and later confirmed by German news agency DPA.

According to the newspaper report, Grace Mugabe also demanded that officials grant her a permit to export millions of dollars' worth of ivory to leaders in various countries, despite Zimbabwe imposing a general ban on ivory trading.

"Once outside Zimbabwe, the 'gifts' would be pooled together with other consignments of the product and routed to black markets," The Sunday Mail reported.

Police said they were initially tipped off by an unnamed whistleblower. "Police and whistleblowers laid a trap for suppliers believed to be working for Grace Mugabe," Christopher Mutsvangwa, a senior official in the presidency, said. "The culprits were caught and that is how investigations started. When we were confronted with so much evidence, there is no way we could ignore it."

Zimbabwe has a stockpile of ivory worth millions of dollars but cannot legally trade it without a permit issued by the Convention on International Trade in Endangered Species of Wild Fauna and Flora (CITES).

The former first lady is expected to be called in for questioning.

Police also told local media that they suspected a major ivory shipment intercepted by officials in December at Robert Gabriel Mugabe International Airport in Harare, shortly after the Mugabes' ouster from power, likely belonged to the former first lady.

"I was told Grace would instruct Zimparks officials to release the ivory on the basis that they were the first lady donations to unnamed fellow first ladies in the Middle East countries," Environment Minister Oppah Muchinguri told local media. "I then commissioned full investigations into the matter," that have since concluded.

Grace Mugabe was initially tipped to succeed her husband as Zimbabwe's president. However, following Robert Mugabe's ousting in November after 37 years in power, officials from the ruling ZANU-PF picked former Vice President Emmerson Mnangagwa to lead the country.

Zimbabwe has also suffered from rampant poaching in recent years. Around 400 elephants died of cyanide poisoning in Hwange, Zimbabwe's biggest national park, between 2013 and 2015.

Officials insist that the number of endangered animals lost to poaching has since dropped sharply, citing market disturbances and an effective global crackdown on ivory trading.