Zimbabweans wary of new 'bond notes' to match the dollar

The Reserve Bank of Zimbabwe (RBZ) has announced that it will be printing local bond notes with the same value as the US dollar. Most residents are wary of the move saying it could worsen the cash crisis. 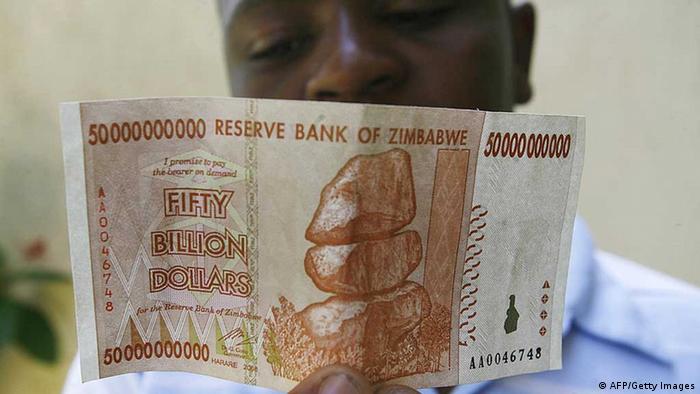 Sithando, a communication specialist in Zimbabwe, is pertubed by the announcement by the Reserve Bank of Zimbabwe that it will start printing bond notes which have the same value as the dollar.

"There might be panic, you will find that the US dollar will begin to disappear from the streets and people will only be using the bond notes," Nyathi told DW. She said the biggest danger is that the people will no longer be able to withdraw US dollars once the bond notes start circulating. "This will mean they [US dollars] will start re-appearing in the black market."

Tafadzwa, a bank teller is of the same opinion. He told DW that once the bond notes are out, they will be prone to inflation as was the case in 2008. "Businesses will find it difficult to import stuff from countries like South Africa," he said.

"I want the US dollar to remain, notwithstanding the current [cash] shortages."

Besides the printing of the bond notes, the governor of the Reserve Bank of Zimbabwe John Mangudya said they would limit daily bank withdrawals to $1,000 (875 euros). Some ATMs would also be shut down meaning Zimbabweans might be forced to spend longer in queues if they are to get cash from banks.

No return of the Zimbabwean dollar

He ruled out the return of the Zimbabwe dollar which the country abandoned in 2009. Due to one of the worst levels of hyperinflation, President Robert Mugabe's government opted for a multi-currency system. 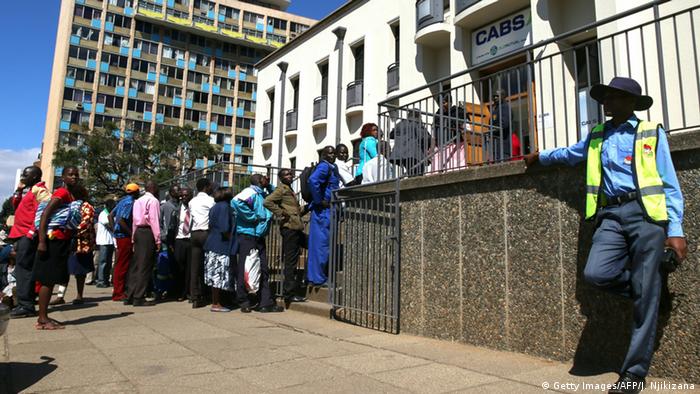 Long queues at ATMs have become common in the capital Harare

Currently the Euro, Botswana pula, South African rand, Chinese yuan, Japanese yen, Australian dollar and the Indian rupee are all considered legal tender in Zimbabwe. But it's the US dollar which is mostly in circulation.

According to Mangudya, in order to solve the cash crisis in Zimbabwe while at the same stabilizing the economy, it was essential to go back to the basics. "The reserve bank has established a $200 million facility which is supported by the African Export and Import Bank to provide a cushion for high demand for foreign exchange in this economy," the central bank governor said.

"In order to mitigate against possible abuse of this [$200 million] facility through capital flight, proceeds from the fund shall be granted to qualifying foreign exchange earners in bond coins and notes, which shall operate alongside the currencies within the multi-currency system and at par with the US dollar," the governor added.

The new bond notes will be in $2, $5, $10 and $20 denominations. For weeks now, Zimbabwe has been hit by an acute shortage of cash. Independent economist John Robertson told DW, the cash crisis will likely continue until Zimbabwe improves on its exports and cuts down on imports. 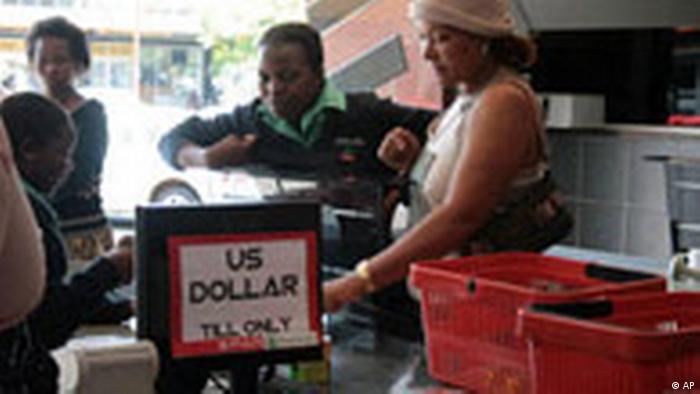 Goods in supermarkets are sold in US dollars. Back in 2014, change was sometimes given in sweets or even condoms

According to the Observatory of Economic Complexity (OEC), in 2014, Zimbabwe exported $2.5 billion, while it imported $6.25 billion. This resulted in a negative trade balance of $3.4 billion. Zimbabwe, once considered the bread basket of southern Africa now imports goods such as sweets, toothpicks and even bottled water.

"The governor said he was going to block the leakages [of foreign currency from Zimbabwe], but he failed to mention even one of the most serious leakages which is the fact that government officials feel that they deserve better medical treatment than they get from local institutions," Robertson said. "So when they need medical treatment, they leave the country and they pay for it at high price at very expensive hospitals outside the country."

Mugabe as an example

Robertson also said the same government officials who have ruined the education sector with their policies no longer take their children to local schools. "All their children are in schools and universities in foreign countries. That is a huge leakage and the reserve bank governor didn't even mention that," Robertson said.

Almost all senior government officials including President Robert Mugabe fall under that category. The 92-year-old Zimbabwean leader often travels to Singapore to get medical treatment. Last month, he announced that his daughter had gone to Singapore to deliver a baby since she knew the doctors there well enough.

That announcement drew criticism from Zimbabweans who in most cases fail to get proper treatment at home. Mugabe's daughter and her siblings are also studying abroad.

Columbus Mavhunga in Harare contributed to this article.

Zimbabwean agencies work overtime as diamond mining companies rush to comply with indigenization legislation. The April 1 deadline compelled many firms to submit their proposals on how to engage with the law. (01.04.2016)