Zimbabwe has gone from bad to worse since longtime autocrat Robert Mugabe was toppled. The opposition is planning weeks of protests against the government over a severe economic crisis and political repression. 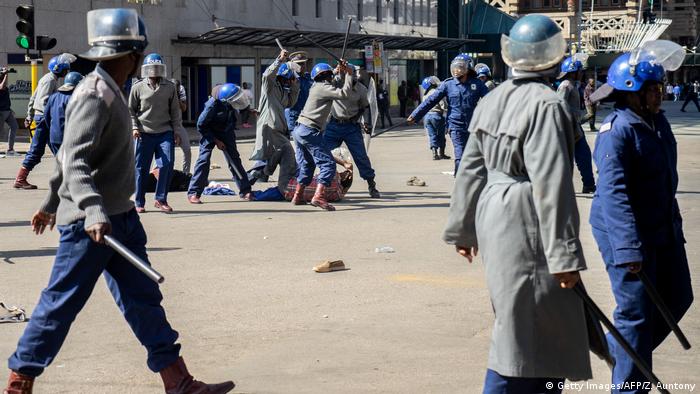 Police in Zimbabwe fired tear gas and bludgeoned protesters with batons after hundreds of people gathered in the capital Harare on Friday in defiance of a court order banning anti-government protests.

The protests were the first in a series of nationwide demonstrations called by the Movement for Democratic Change (MDC) opposition party against a crashing economy and the government of President Emmerson Mnangagwa.

The MDC called off the protest in Harare early on Friday after a court order banned the action, but hundreds of people braved a heightened security presence to vent their frustration in the capital's African Unity Square.

Seven people were injured and 80 people were arrested, said MDC leader Nelson Chamisa, who vowed to continue to mobilize opposition forces against the government. 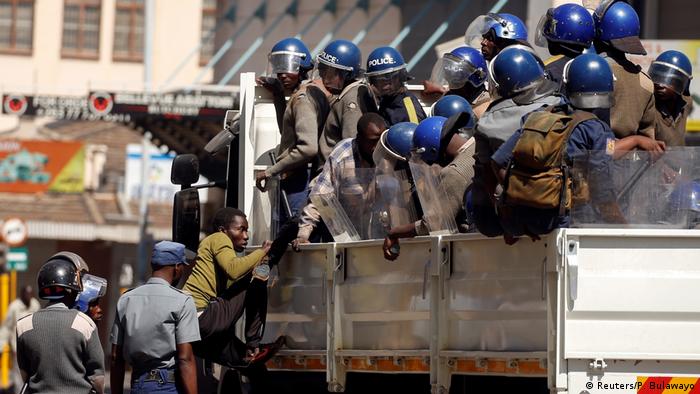 In Geneva, the UN Human Rights Office called on the government to allow peaceful protests.

"With opposition demonstrations still likely to take place in Zimbabwe in the near future, we urge the government to find ways to continuously engage with the population about their legitimate grievances on the economic situation, and to stop cracking down on peaceful protesters," Rupert Colville, the spokesman for the UN High Commissioner for Human Rights, said in a statement.

"We are deeply concerned by the socio-economic crisis that continues to unfold in Zimbabwe," he said. "The dire economic situation is now impacting negatively on the realization of the economic and social rights of millions of Zimbabweans." 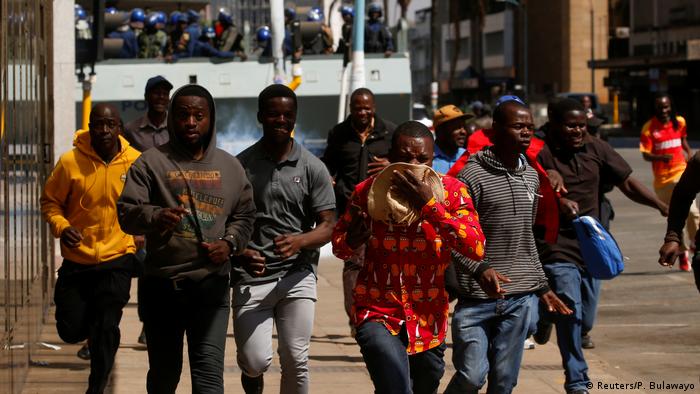 Protesters run from teargas during clashes with riot police

Many Zimbabwean's hopes for a better future have been dashed since the military toppled longtime autocrat Robert Mugabe in 2017 and Mnangagwa won elections the following year promising political and economic reform.

The opposition and human rights groups accuse Mnangagwa of following in the footsteps of his predecessor, whose 37-year rule was marked by draconian security measures and economic mismanagement that turned the breadbasket of Africa into a basket case.

Amnesty International accused Mnangagwa's government of "using some of the brutal tactics seen under the government of Robert Mugabe."

"Instead of listening to protestors' concerns about the economy, the authorities have used torture and abduction to crush dissent and instill fear," said Muleya Mwananyanda, the human rights organization's deputy regional director for southern Africa.

Anger has boiled over due to triple-digit inflation, rolling blackouts and shortages of fuel, water and food.

The World Food Program said this month that almost a third of the country's 16 million people are in need of humanitarian aid.

In addition to mismanagement, food insecurity has been made worse by drought and extreme weather.

Opposition figure Tendai Biti says President Emmerson Mnangagwa is to blame for the alleged human rights abuses being carried out against people in Zimbabwe. In an interview with DW, he urged the UN to intervene. (25.01.2019)

Emmerson Mnangagwa has taken the oath of office following an election victory that was disputed by the main opposition. He has held the post since November following the resignation of longtime leader Robert Mugabe. (26.08.2018)

The Convention on International Trade in Endangered Species of Wild Fauna and Flora (CITES) banned the trade of ivory in 1989. That decision has helped increase the population of endangered African elephants, but Zimbabwe says it wants to relax the ban so ivory stockpiles can be sold.