Evan Mawarire, an outspoken government critic, was clutching a bible as he was taken away. At least eight people have died in protests over the world's highest oil prices. 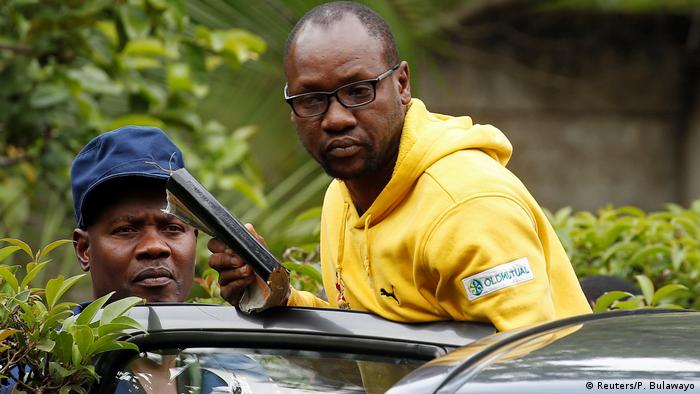 Heavily armed police arrested prominent government critic and pastor Evan Mawarire in Zimbabwe on Wednesday. He was arrested at his home in the capital Harare amidst a crackdown on the widespread protests that have erupted over steep increases in fuel prices.

Mawarire is well-known in Zimbabwe for his instrumental role in a series of nationwide protests in 2016 against the mismanagement of the government under longtime strongman Robert Mugabe. Mugabe's 30-year rule was brought to an end in November 2017, when he was replaced by his former ally, now-President Emmerson Mnangagwa.

"They are alleging that he incited violence through Twitter and other forms of social media in the central business district," said Mawarire's lawyer, Beatrice Mtetwa.

Wednesday marked the third day of violence throughout Zimbabwe after protests over what are now the world's highest gasoline prices. Local reporters said the streets of Harare had become deserted, and the country's largest telecom company Econet sent out messages to its users that the government had forced it to shut down service.

At least eight people were killed in demonstrations on Monday when police and military fired into the crowds, according to multiple watchdogs. However, the government has claimed that only three people were killed, including a policeman it says was stoned to death by an angry mob.

The spokesman for the opposition MDC party wrote on Twitter that besides Mawarire, "party leadership" had also been detained.

Land reform has been costly for the Zimbabwean economy. But not for Zambia, where agriculture has benefited from Zimbabwean white commercial farmers. Is this a cautionary tale for South Africa and its land reform plans? (16.01.2019)