Zermatt: Where the Matterhorn towers above it all

A marriage proposal on the Matterhorn: It's the kind of thing that only happens in Zermatt, playground of the rich and famous. We visit one of Switzerland's most famous ski resorts. 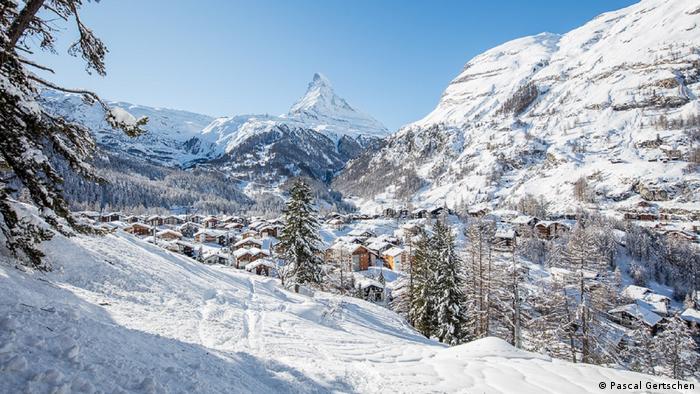 Perhaps love begins here on the Kirchbrücke bridge, when the sun rises over the Matterhorn, freezing tourists eagerly awaiting the chance to see for themselves. Mathias Imoberdorf from the Zermatt Bergbahnen mountain railway company tells us that sometimes so many people crowd onto it with their cameras that there are now plans to expand the bridge.

This winter day is not an easy one for him. Up on the mountain the wind is blowing, so it's not certain how long the new tri-cable car system, the world's highest, can keep running. He says it could get shaky before the trip begins, in one of the new luxury cabins with leather seats and Swarovski crystals that sparkle inside and out. This is more or less the Ferrari of mountain cableways — quite fitting for a place like Zermatt, where champagne corks pop often. 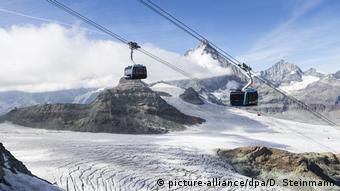 Imoberdorf rhapsodizes about this mode of travel while the glass floor hangs suspended 170 meters (560 feet) above the glacial landscape, saying it's like flying. Suddenly the view clears, revealing the highest slopes in Europe, where people can ski even in July. Up on the Klein Matterhorn, at 3,883 meters, it's bitterly cold. And while the wind whistles in our ears, it's easy to imagine the extreme conditions to which the workers who built the cable car were subjected: wind speeds of up to 180 kilometers an hour (112 miles an hour) and temperatures of minus 30 degrees Celsius (minus 22 degrees Fahrenheit). 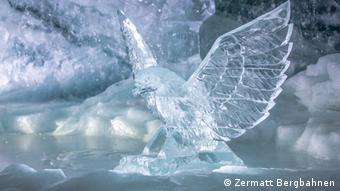 A fairy tale palace of ice

Fifteen meters below the surface, it's calm. Here visitors can plunge into a world of perpetual ice. Through a tunnel, they reach a huge walkable glacial crevasse. Ice artists have decorated what's called the Glacier Palace with ice sculptures of local animals: marmots, cows and eagles. In the middle is a Chinese dragon, because more and more Asian tourists are coming to Zermatt — thousands just to see the Matterhorn.

Today, too, they're sitting up in the restaurant. "This mountain is our star, our only star," says Imoberdorf with a grin, as some customers talk excitedly about how they spotted the singer Elton John yesterday. This is a mountain idolized by tourists and locals alike — virtually a superstar. 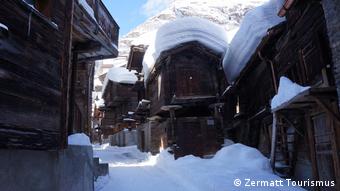 The village below the village

Every day, down in the valley, the first thing Edy Schmid looks at is his beloved Matterhorn. He knows the history of the village as well as anyone. "Now you're about to be 150 years older," he says cheerfully as he invites visitors into his subterranean museum, Zermatlantis, located right under the Kirchplatz (church square).

Inside, a replica of the village has been built to look the way it used to when the locals were simple farmers. Then, in 1865, Edward Whymper from England conquered the Matterhorn, but the descent ended tragically, four people falling to their deaths. The event made Zermatt world famous. After that first ascent, British mountaineers and tourists flocked to the village. Farmers became hotel owners; the old granaries and barns became luxury chalets — such as the Chalet Pico, in which pigs were once kept. The original broken rope from Whymper's expedition is displayed in the museum like a valuable treasure, in a glass display case. It's a rope with many secrets: To this day it is unclear what led to the accident. 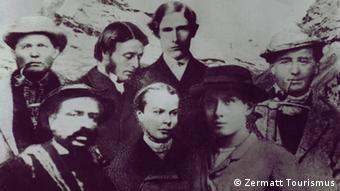 A story of triumph and death: Edward Whymper with his climbing party

Ski resort with a global reputation

The village, with its 5,600 inhabitants, still lives with the memory of the tragedy. Time and again tourists come here because of it. The Zermatt Shuttle train runs from Täsch straight into the heart of the Matterhorn village. Now, in winter, the high season, that's 35,000 holidaymakers. The village is car-free. That was decided by a referendum in 1972.  Innumerable electric buses and taxis zip through the village. Even the police and postal workers only drive electric vehicles.

In Zermatt's small bookshop, titles about the Matterhorn are the bestsellers. The Guardian of the Matterhorn by Kurt Lauber is one of the books on the shelves. For more than 20 years he was the warden of the Hörnlihütte, the cabin that is the point of departure for alpinists climbing the Matterhorn. He's a man who almost feels married to the mountain "in good times and bad." 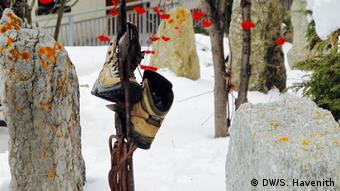 Happiness and suffering on the Matterhorn

That's because the mountain still takes lives. Lauber has experienced not only the climbers' happiness but also the suffering of relatives waiting in vain at the Hörnlihütte. It's the reason why, in the middle of the village, next to the church, a mountaineers' cemetery was established. "I chose to climb" stands on one of the snow-covered graves, on which candles and flowers are still laid. The residents have a deep connection to the dead here, because they all have their own Matterhorn stories and their own relationship to the mountain.

In the footsteps of Edward Whymper

One of them is Philippe Oswald, who has lived in Zermatt for 20 years but still takes a picture of the Matterhorn every day. He gleefully leads us through his hotel, the Monte Rosa. He doesn't have to worry about marketing the establishment, because it was in this very hotel that Edward Whymper spent the night during his world-famous quest for the summit. 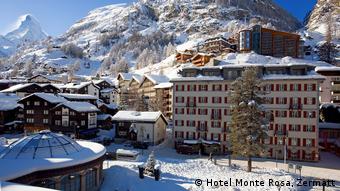 A hotel with a history: The famous Monte Rosa

Now the Monte Rosa is a 4-star boutique hotel right on the village square. If you look more closely, you'll find the bronze markers set into stone that are dedicated to those who made the first ascent: Zermatt's "Walk of Climb." In the Whymper Salon there are pictures of the famous alpinist, and a wall from that time with delicate Art Nouveau motifs has been exposed. "I just love walking through this old building," says a laughing Philippe Oswald, who owns enough pictures of the Matterhorn and Whymper to fill a museum.

"The Matterhorn is simply everywhere in Zermatt," says spa director Daniel Luggen, who, like the mountain, watches over his village. "Thirty-eight 4,000-meter peaks surround Zermatt, but all eyes are always turned towards the Matterhorn - a mountain we owe a lot to." 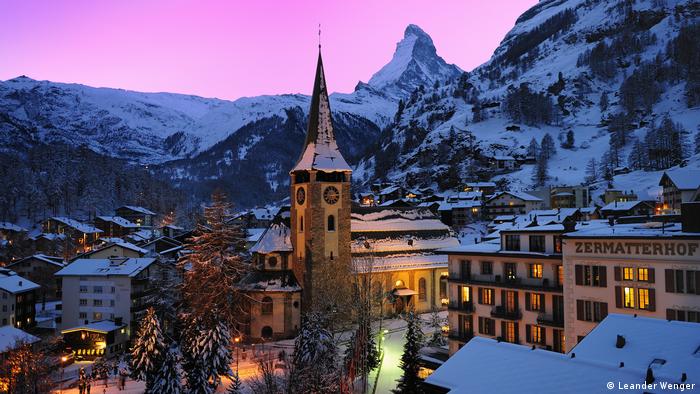 The village and its mountain