Zambia has sworn in President Edgar Lungu amidst protests by the opposition, claiming that the polls were rigged. Tough challenges await the new leader in a country that has been deeply divided along tribal lines. 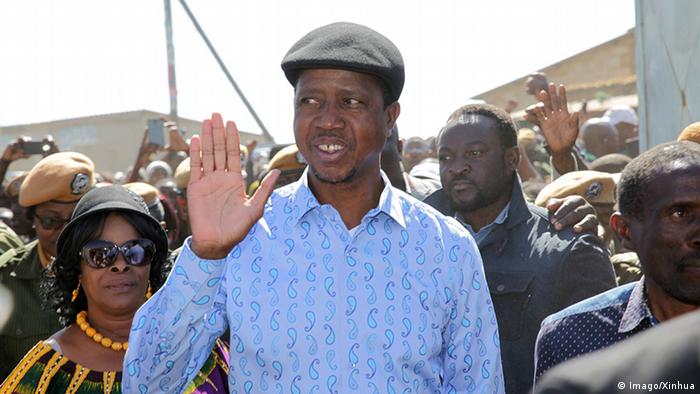 Regional leaders who attended the swearing-in ceremony that was boycotted by the opposition included Zimbabwe’s Robert Mugabe who been in power for 36 years.

Other African leaders in attendance were; Uganda’s Yoweri Museveni himself who has been in power for at least thirty years, Tanzania’s John Magufuli and Botswana’s President Ian Khama among other dignitaries.

Tuesday has been declared a public holiday in the Southern Africa nation for the inauguration ceremony. Lungu´s Patriotic Front (PF) party was declared winner of the poll with 50.3 percent defeating opposition candidate Hakainde Hichilema who polled 47.63 percent of the votes cast.

Despite claims by the opposition United Party for National Development (UPND) that the August 11 polls were a fraud, the Constitutional Court ruled in favor of the incumbent.

Under the country's current laws, the opposition had seven days to petition the polls results to nullify Lungu´s victory. The UPND said they were not given a fair opportunity to present their case at the country´s highest court. They accused the judges of collecting bribes from the ruling PF party.

Clashes have been reported between supporters of rival parties in some parts of the country following the announcement of elections results. A high politician, Nevers Mumba of the Movement for Multiparty Democracy, was arrested for storming the Zambia National Broadcasting Corporation demanding to see a news script.

Neo Simutanyi a political analyst in Lusaka told DW that the tightly contested election has left the country more divided between tribal lines.

"The challenge that faces Edgar Lungu is to stabilize the country to ensure that there is political stability but we are not sure that will happen,” Simutanyi said. "I have never seen so much hate speech and tribal hatred as I have seen now. Zambia has never been as polarized as it is in 2016. There are indications that there will be full blown civil strife in the not so distant future from now," Simutanyi added.

The economy is one of the main issues in the election. Zambia is Africa´s second largest copper producer, but the dwindling world market copper prices and a severe electricity shortage has hit the country´s economy and led to many job losses in the mining sector. Copper contributes an average of 11 percent to Zambia’s gross domestic product (GDP). The Zambian currency, the Kwacha, has also not been performing well, inflation is also up. Zambians hope that the new president will improve on the economy.

Deborah Bwalya, a Zambian living in Lusaka, told DW that she wants the Government to reduce on the exchange rate of the Kwacha against the dollar. "At the moment we are having challenges, you will find out that something we used to buy at 5 Kwacha, we are now buying at 15 Kwacha which is a lot to us Zambians. You find out that the dollar keeps on rising but our salaries are not raised."

The 59-year-old leader, however, said in a statement after he was declared winner that he now has sufficient time to turn around the economy.

"I have five years now which is sufficient time to take more decisive actions. I will take measures to grow the economy and control expenditure," he said after meeting business leaders in Zambia.

Political analyst Innocent Ndashe expressed little optimism that there will be an immediate turn around of the Zambian economy. "We´ve seen that the cost of living has been pretty much high and one of the reason is that our currency has been weak and coupled with low productivity from the agricultural sector. So the cost of living might drastically go up and that might have a negative impact on most of the households who are already struggling to afford the cost of basic food items."

What next for Zambia?

President Edgar Lungu's election victory leaves Zambia divided. The opposition is refusing to accept the results and wants to challenge them in court. The country's south has been hit by violence. (16.08.2016)

Zambia suspended the licenses this week of one of the country's main television stations and two radio stations. Analyst MacDonald Chipenzi thinks this move was aimed at stifling media freedom. (24.08.2016)