The Zambian government is trying to push a bill through parliament to change the constitution. But civil society groups argue the changes will effectively increase presidential and ruling party powers. 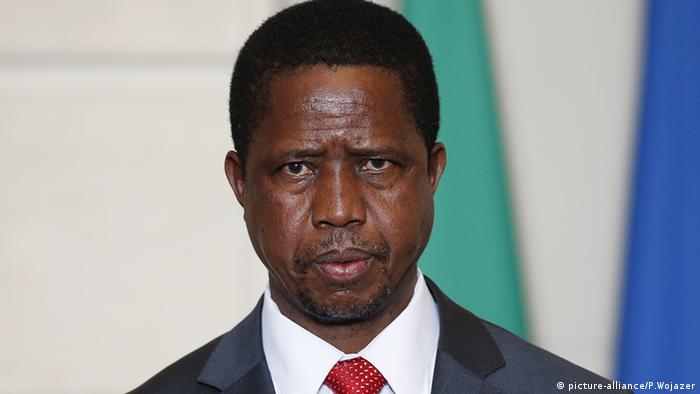 Bill number 10 – that is the controversial bill that has created a stir in Zambia's political landscape. For the past few days it has been trending on Zambia’s social media scene, and a petition hearing against the passing of the bill has even attracted a small crowd waiting outside the packed constitutional court.

"The bill is the grave digger of Zambia's democracy and the country's worst constitutional amendment since the achievement of independence in 1964," Sishuwa Sishuwa, a historian from the University of Zambia told new agencies.

Changes to the constitution, which have passed a first reading in parliament, include an increase in presidential powers, allowing the president to nominate judges, ministers, change electoral policies and increase controls over the central bank. The fear of many of those who are against the reforms, is that the bill will sail through parliament, which is dominated by president Edgar Lungu's ruling Patriotic Front (PF) party, and ultimately be signed into law.

Yellow cards and petitions in court

In what is seen as the final plea against the reforms, members of the civil society group, Chapter One Foundation and the Law Association of Zambia filed a petition in an attempt to halt the move.

"This is not even about the current ruling party, it is about whichever party comes into power and has this document to oversee the country with," says Laura Miti who heads the civil society group Alliance for Community Action. "Our democracy is completely written out if this constitution passes,” she said, speaking to DW.

Together with the Zambian musician Chama Fumba also known as Pilato, she started the yellow card social media campaign to protest against corruption and to inform the public about the bill. Civil society has even made it their job to translate parts of the constitution into local languages.

When the bill was initially tabled, the Law Association of Zambia noted in a statement that a number of points were particularly controversial. One point was the introduction of deputy ministers, which they said would raise the expenditure of the administration. A second point was the government's potential control in the appointment of judges and the third was the lack of clarity in the composition of the parliament.

The fact that the number of parliamentary and judiciary seats are not enshrined in the constitution is very worrying, explains Miti. "This means that the president or ruling party, via a simple majority vote in parliament, can create new seats in the party stronghold, or increase the seats of the nominated members of parliament." This, she points out, would create an imbalance within parliament, which could open the country up to further constitutional changes in favor of the ruling party of the time. "They could change the election date, they could give themselves a longer mandate – anything," she says.

A second issue is that the nature of coalition building would change. If in an election, neither party wins an overall majority, Zambia’s current constitution foresees a run-off between the front runners, allowing Zambians to elect their president in a direct vote. The proposed changes would allow the party with the highest number of votes to form a coalition with other parties. While this is common practice in parliamentary democracies – in a presidential democracy, like Zambia, Miti argues, this system could be misused by the president and his party who essentially have more power.

Another proposed change to the constitution is that the power of the central bank to oversee the monetary policy would be removed, giving the government controls over the country’s economy. According to Miti, the cabinet could decide to print money. It could also borrow money from the central bank without limits, as parliamentary oversight has also been removed in the proposed changes.

Hyde Haguta, a former member of the National Democratic Forum which drafted the bill, however, argues that the controversy over the bill was being blown out of proportion. "There are of course controversial provisions – the fact that one or two of them are not agreed upon by everyone, does not really call for the withdrawal of the entire bill," he argued.

Speaking to ordinary Zambians, DW received mixed views about the bill. It’s trending on Whatsapp, but I don’t really know what it’s about, one student admitted. Charles Tembo, a Lusaka taxi driver, said that the president should get all the support that he needed, even if the constitution needed to be changed for this.

Malama Kasongo, a Zambian nurse believes the constitutional could put an extra strain on ordinary Zambians. "It looks like [the public] are being included, but people up there are the ones who make the final decision,” she said. Instead of spending the money on the constitutional changes and the salaries of deputy ministers, the government should instead try to solve the country's economic woes and tackle the effects of climate change, she argued.

After working in the civil society space for over 25 years, Laura Miti is uncertain about Zambia’s political future. These days, she says, it’s even difficult to obtain permission to hold civil society meetings. "This government is the most authoritarian government that we’ve had almost since 1991, when we came back to multi-party politics," she says. "It’s been a slow degeneration, almost difficult to believe. You sit back and think, how did we get here, how is it that we cannot hold this meeting."

Lungu's government has shown an increasingly hardline stance towards critics and members of the opposition. The president's main political opponent Hakainde Hichilema was jailed for four months for treason, after failing to concede defeat in the 2016 presidential elections. Additionally Zambia’s media has come under strain. In the past few years, media stations critical of the government have been suspended.

Zambia has historically been very stable, says Miti, that is why this case has received so little attention internationally. What Zambian people needed to do now, is to prevent the regression on democratic principles that has happened, has gone under the radar. Nobody really worries about Zambia, because we are not Congo, we’re not Zimbabwe, but it is extremely important for the Zambian people to prevent this regression.

Kathy Short contributed to this article.

The Zambian government places attracting foreign investment at the top of its development agenda. Critics say investors are only interested in making profits and not the country's development. Glory Mushinge reports. (27.07.2017)