Security forces in Yemen have used water cannons, bulldozers and tear gas to clear a protest sit-in on the road to Sanaa's airport. The Shiite rebel movement is urging the government to resign, alleging corruption. 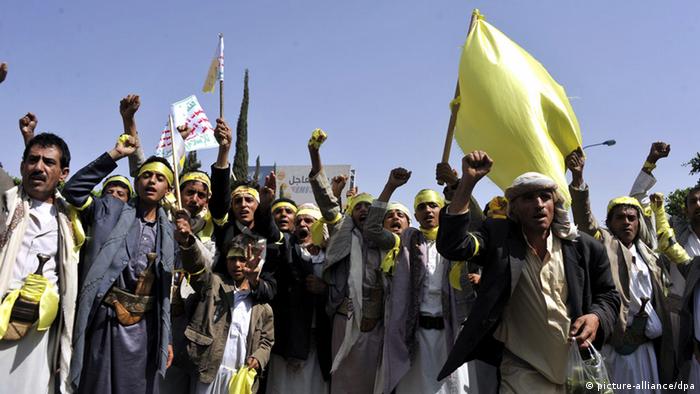 Yemen's police cleared the main road to Sanaa International Airport on Sunday, reacting after long-running protests moved onto the strategic Airport Road, also hindering access to the ministries of electricity and telecommunications.

A group of Shiite rebels, known as Hawthis, have been calling for the government's resignation for weeks, accusing it of corruption. President Abed Raboo Mansour Hadi this week offered to name a new prime minister and reinstate a scrapped fuel subsidy, but the protesters only redoubled their efforts in response.

News agency DPA, citing a Hawthi spokesman, reported that one protester was killed and 40 injured in the clashes. The Hawthi movement's own Al-Masira television showed images of people being rushed into ambulances and stone-throwing demonstrators facing off against water cannon vehicles.

Other sit-ins remain in place around the capital near several other government ministries. The Hawthi or Houthi movement's influence, formerly confined largely to the north of the country, has stretched towards the capital Sanaa in the course of the year, as it won support of tribes formerly sympathetic to their Sunni rivals.

Yemen's government says that the rebel group is backed by Iran, accusing the Hawthis of only wanting to seize power, not to overturn the recent increase in fuel prices. When the subsidies were cut in July, fuel prices nearly doubled.

Yemen's longstanding President Ali Abdullah Saleh was ousted from power in February 2012 after a protracted uprising; since then, the country has been uneasily seeking to usher in new leadership.