A key round of talks in Geneva aimed at reviving the World Trade Organization's Doha Round will continue after concessions were made the previous day above all by industrialised states, diplomats said on Saturday. 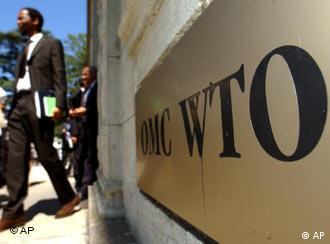 The latest round of WTO talks is seen as crucial

Diplomatic sources said the concessions included an offer by the United States to reduce the cap on subsidies for its agricultural produce limit to $14.5 billion (9.3 billion euros) a year.

The US had already reduced this to $15 billion from an original figure of $16.4 billion. The sources said a reduction by European Union countries of EU tariffs by 80 percent -- instead of the 60 percent already offered -- was now widely expected.

In return, the EU is looking to the major developing countries, such as China, India, Brazil and Mexico, to make similar cuts in their tariffs on industrial goods and services provided by the industrialized countries.

EU Trade Commissioner Peter Mandelson said when the talks opened last Monday the EU was ready to abolish all subsidies on agricultural exports if there was agreement on the Doha Round, which has been running for almost seven years.

A lot left to do

The United States had already made clear its commitment to securing a successful conclusion to the trade liberalization talks, but observers said there was still much hard bargaining to do.

The Doha Round, named after the Qatari capital where it began in November 2001, has been deadlocked for years. The impasse can be broken only by unanimous agreement between all 153 member countries.

Almost 40 ministers from all the major trading blocs have been negotiating this week in Geneva in what has been described as a last-ditch attempt to break the deadlock.