Crunch world trade talks in Geneva showed signs of a breakthrough Friday after negotiations between seven key countries, raising the possibility of a new pact on global trade after seven years of gridlocked negotiations. 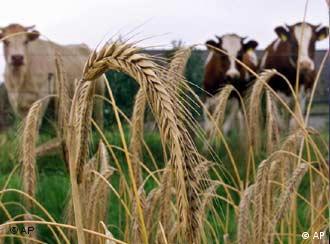 A gruelling week-long World Trade Organisation meeting in Geneva marked by fruitless haggling and a growing sense of gloom showed sudden signs of progress on Friday, July 25, suggesting that a new pact on global trade may well be within reach.

"There has been progress made, yes," EU Trade Chief Peter Mandelson told reporters, though he warned that it was "not a final deal." 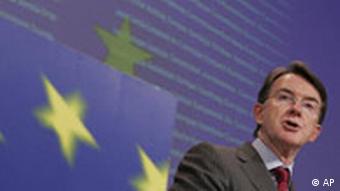 Mandelson is cautiously optimistic about a new pact

Mandelson said progress had been made in most areas of the talks, which are focusing on moves to open up trade in agriculture and industrial goods.

No details have emerged as yet about but it's reported that the agreement between the seven nations will now be presented to a wider group of trade ministers from 35 nations involved in the Geneva talks.

The final deal will have to be approved by the 35 nations as well as the total 153 member nations of the WTO.

"Time is running out"

The meeting, which follows seven years of stalemate, is aimed at saving the so-called Doha round which seeks to liberalize trade by reducing import tariffs and trade-distorting subsidies.

The talks have been jammed for years because of differing and unbridgeable demands of industrialized and developing nations.

At the heart of the deadlock lie developing nations' demand for lower farm subsidies and agricultural tariffs in the rich world. In return, industrialized countries are pressing that developing countries reduce import duties and make their markets more accessible to imported services and manufactured goods.

Both sides have been slow to move away from their entrenched positions and make concessions.

Earlier WTO Director-General Pascal Lamy had warned that the talks in the long-running Doha round risked collapsing today if members failed to narrow their differences.

"This is the blunt reality ... The situation is critical, edging between success and failure," Lamy told delegates at the talks, according to his spokesman. "Time is running out and the next 24 hours are crucial."

Lamy has said a successful deal would bolster a global economy hit by soaring fuel and food prices.

Ministers made little progress since the meeting opened in Geneva on Monday this week. Both Washington and Brussels have said they have given ground in the talks and that the ball is now in the court of developing nations. 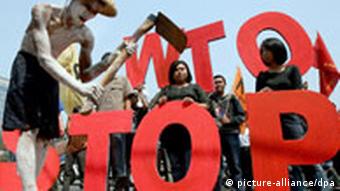 Indonesian activists demonstrated in Jakarta for a fair deal

On Friday, Lamy proposed the United States cut its annual farm subsidies to $14.5 billion dollars (9.2 billion euros). Earlier in the week, US Trade Representative Susan Schwab said Washington was ready to cut its annual payments to farmers to 15 billion dollars -- a move rejected as insufficient by developing countries such as India and Brazil.

Lamy also proposed that developing countries can classify 12 percent of their products as "special" and thus shield them from tariff reductions.

AFP reported on Friday that India seemed to be blocking progress by sticking to its tough stance on opening up its internal markets for farm and industrial products.

Indian Commerce Minister Kamal Nath has insisted that he will protect millions of subsistence farmers and his country's nascent industry, which are shielded from imports by tariffs levied on foreign goods.

"Nothing has changed really. The big question today is India," AFP quoted an unnamed diplomatic source as saying. "We are worried about the political willingness of India to negotiate."

US, Germany Think Positively Ahead of WTO Trade Talks

US and German officials expressed hopes for a breakthrough at this month's World Trade Organization (WTO) meeting following a lengthy stalemate in the so-called Doha round of trade talks. (01.07.2008)