Wreck of last US slave ship Clotilda found in Alabama

Researchers say the wreckage of the Clotilda, the last known ship to have brought people enslaved in Africa to US shores, has been located. The voyage took place decades after transporting slaves to the US was outlawed. 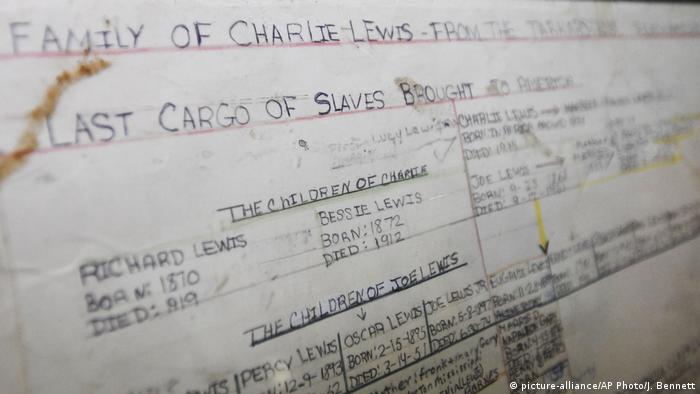 A study team in Alabama on Wednesday confirmed that the wreckage of the last ship to smuggle slaves from Africa to the United States had been found.

In a message on its Facebook page, the Alabama Historical Commission said that, after a "yearlong scientific investigation," it could verify that the wreck was that of the wooden schooner Clotilda.

"The discovery of the Clotilda is an extraordinary archaeological find," said Lisa Demetropoulos Jones, executive director of the commission.

"Descendants of the Clotilda survivors have dreamed of this discovery for generations," she said.

The cramped wooden ship transported 110 people from the Kingdom of Dahomey, now the West African nation of Benin, in 1860. The vessel was being operated illegally after US Congress banned the importation of slaves in 1807.

It happened just before the American Civil War, when a plantation owner is believed to have made a bet that he could bring a shipload of slaves across the Atlantic.

The ship is thought to have been intentionally scuttled and set ablaze soon after it arrived back, in delta waters north of the port of Mobile.

After five years of slavery, and with the end of the Civil War, the victims were unable to return home but did have the means to buy small plots of land to the north of Mobile. They settled and built a community there, known to this day as Africatown.

The journey appears to be the best-documented voyage of its kind, with recorded testimony from survivors who lived into the 20th century.

Researchers used insurance records to determine the dimensions of the ship and other characteristics, according to National Geographic magazine which supported the quest to find the vessel.

"We are cautious about placing names on shipwrecks that no longer bear a name or something like a bell with the ship's name on it," the maritime archaeologist James Delgado said in a statement. "But the physical and forensic evidence powerfully suggests that this is Clotilda."

A local news reporter last year found the wooden remains of what was thought to be the Clotilda, but that was revealed to have belonged to another ship. However, the publicity helped spark a new search, which found the wreck now identified as the true vessel.

Descendants of slaves in Brazil get bottled light for their village

Electricity is rare in the remote Kalunga villages, but diesel and kerosene lamps are dangerous. Could solar power from plastic bottles be the answer? (18.12.2018)

The US rapper who now calls himself Ye repeated his support for President Donald Trump during his performance on Saturday Night Live. He also posted controversial tweets calling for the abolition of the 13th amendment. (01.10.2018)