There are plenty of places to hide an elevator test tower in industrialized Germany. So it's odd that the world's tallest one is going up in a small city in the southwest. DW's Conor Dillon dug up some dirt in Rottweil. 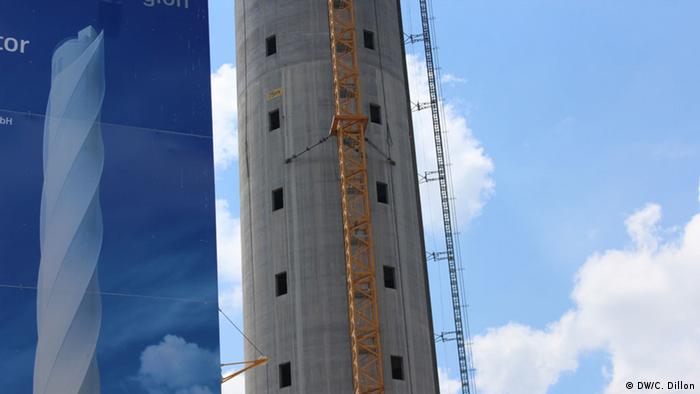 The ThyssenKrupp elevator test tower in Rottweil, Germany, will be the tallest in the world - 246 meters (807 feet).

And when the last bucket of concrete is craned up top, the structure will weigh five times as much as the Eiffel Tower.

"What we really need the height for is the fast elevators," says project coordinator Peter Osterstock. These cars will travel at speeds in excess of 60 kilometers per hour. The tower's high-speed elevators can be slowed back down in time before they shoot up through the roof.

As an afterthought, he adds that they'll be testing the brakes by loading up an elevator with 40 tons of material and letting it freefall - "but only from about 100 meters high." 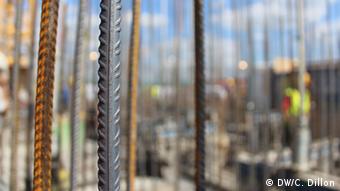 The tower is growing rapidly in Rottweil

More important, the company's needs this tower to test its MULTI elevator system, sometimes described as the Harry Potter elevator. The MULTI uses magnets instead of cables, allowing its cabins to go sideways as well as up and down. They also move in one continuous loop - a modern take on the recently outlawed paternoster elevator - which requires space.

"They need three shafts that are directly next to one another," Osterstock explains.

Our elevator up to the top isn't a MULTI, and it definitely isn't a speedy elevator. It's the slowest elevator I've ever been on - and Osterstock is quick to point out that it wasn't made by his company, and it wasn't made in Germany.

All I care about is that it gets us up there safely.

Atop the ongoing project, there's a tall security fence, and that feels pretty safe.

Suddenly the whole platform rises a couple of centimeters.

But where some sense mortal danger, Osterstock sees progress.

The massive structure rising over Rottweil is growing at a rate of three meters per day and will finish first-phase construction in July.

After a quick frown, the project coordinator adds, "Or August."

Still, it's absolutely amazing that this colossus is being built here.

Rottweil hasn't really made headlines since people discovered its dogs. It's the oldest city in the German state of Baden-Württemberg. It's perched defensively - medievally - atop a hill, where its 25,000 residents seem to be a bit on the elderly side, sipping beverages and keeping an eye on any suspicious non-Rottweilers. All in all, an unlikely choice for an engineering project of superlative dimensions.

So why not build the tower at ThyssenKrupp's nearby Neuhausen elevator research campus, where nobody would have noticed?

"Too close to the Stuttgart airport," Osterstock says. "You can't build a building this high there." The company did survey other nearby locations, he adds, but, regionally speaking, Rottweil was the best. 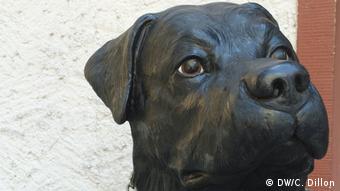 The dogs soon won't be Rottweil's most famous trademark

OK, but why not go underground? That's what the Finnish Kone company did with a pre-existing mine shaft, creating the longest elevator test chamber in the world (330 meters). Germany has plenty of mines.

"Those are not realistic conditions," he says.

When the wind blows, the Rottweil elevator tower will bend with it - by half a meter. Skyscrapers do this, too - they bend. ThyssenKrupp wants to know how its elevators and shafts react in moving buildings. Among the potential problems they want to avoid: resonance.

Beyond that, Ostersock says, the company couldn't have gone underground in Rottweil - too much bedrock. And at a certain point in negotiations with the city, the message was very clear: "Wenn, denn," which roughly translates to "Go big or go home." 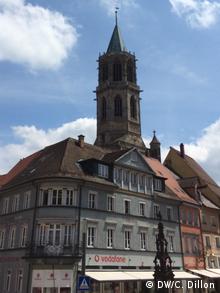 No longer a 'high' building in central Rottweil

This sounds very German. Why? What is this regulation for?

Osterstock has no idea, and he doesn't care. "It was high enough for our tower," he says.

But how do Rottweilers feel?

When it's finished entirely in 2016, the Rottweil elevator tower will be wrapped in a textile dress. That'll make it far more attractive to look at. The material will also reduce the vortex effect of wind whipping around the cylinder. The building's architect was Alfons Bürk - a local.

Still, reports in the German press suggested that not all the locals were happy about irrevocably altering their skyline with a private engineering project.

The city's deputy mayor, Werner Guhl, confirms that there were skeptics. He, himself, he says, was astonished when he first saw the plans - they sounded "a little bit crazy." His citizens' concerns were aired during two city hall forums.

"But after just a few weeks it was clear that this historic, old city needed a signal for the future," he says. 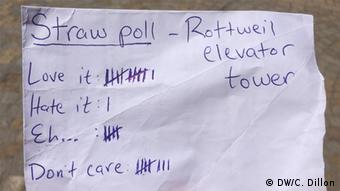 The one 'hater' did say he was originally from Berlin - so maybe it's observation deck envy?

And since the city's only "investment" includes modernizing a few streets at the base of the tower and coming up with a marketing plan for it, the concerns of many locals ultimately amounted to details as trivial as opening hours. Beyond tourist revenues, the city also raised a little bit of cash by selling the property to ThyssenKrupp - "at normal property prices," Guhl says.

But was it really this unanimous? Or is this a case of a city lining up with a business and pulling its citzenry along with it?

In town, I conduct an off-the-cuff unrepresentative survey of .1 percent of the population currently living there - meaning 25 people.

And it turns out most of the Rottweilers either "love" the tower or just don't care.

"I think it is a good project," says an eighteen-year-old named Simon, who likes the idea of tourists spending money in his city.

Isolde recalls the little balloon that was first used to show locals how high the tower would go. "You had a tiny little spot in the sky, and you know, OK, I will see the tower from here. But you could not really imagine the dimensions," she says. "So now, it's about half the height it will be, and it's not that dominant. It's almost elegant. I like it!"

I'm left with the sense that this is all just very German: A huge engineering project that's also somehow elegant, and at the base of a medieval city filled with pretty modern Germans.