The skeletons of 20 children and five adults believed to be victims of the Nazi euthanasia program have been found in a mass grave in western Germany, officials said Thursday. 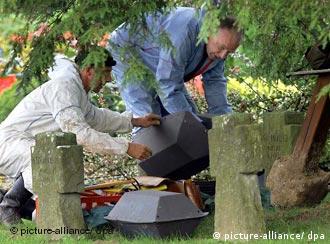 The bones of 20 children were discovered this week during excavation work at a cemetery in the German town of Menden, close to where a World War II hospital run by Hitler's personal physician Karl Brandt was located.

The children, aged from one to seven years, were found alongside the bodies of five adults, Hans-Bernd Besa-von Werden, a spokesman for the district administration said.

Investigations of two of the children's skulls indicated the victims might have been handicapped. 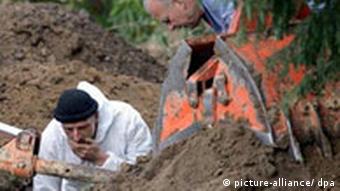 The skeletons discovered in Menden were not buried in caskets

The prosecutor's office in the nearby city of Dortmund said there were indications the deaths might be related to euthanasia, which was secretly practiced by the Nazis from 1939 to 1941.

Some 70,000 people with physical or intellectual disabilities perished in the euthanasia program, which the Nazis believed was necessary to cleanse the German people of racially unsound elements.

Those who were deemed "unworthy to live" by showing symptoms of mental retardation or physical handicap were sent to the so-called killing facilities, where they were murdered by lethal injections or exposure to carbon monoxide gas.

The Nazi euthanasia program, which became an open secret in the Third Reich, was officially terminated in 1941 in the wake of protests from members of the German clergy.

The practice, however, clandestinely continued until the end of World War II with an ever wider range of victims, which included geriatric patients, bombing victims and forced laborers.

Karl Brandt, who was in charge of the program, was executed for war crimes in 1948.

Uruguayan officials are afraid neo-Nazis could get their hands on parts of a German World War II battleship being raised near Montevideo harbor. The "prize" piece is a 400-kilo (880-lb.) bronze eagle atop a swastika. (29.08.2006)

The 11 countries controlling the world's largest collection of Nazi German documents have agreed to open the archive to historians for the first time. (17.05.2006)

Pope Benedict XVI said Thursday the "inhumanity" and the "brutality" of the Nazi regime in his native Germany was one of the reasons he turned to "the right path" of the Catholic priesthood. (07.04.2006)