More than 2,600 people have died in the current Ebola outbreak. The virus has so far infected at least 5,300 people in West Africa since early this year. 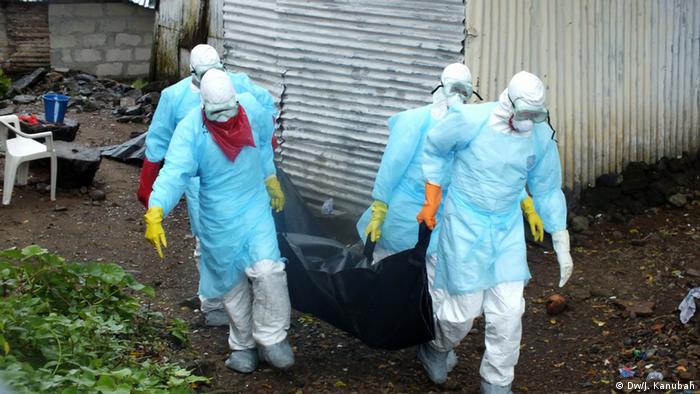 The World Health Organization (WHO) announced Thursday that the Ebola outbreak, which has killed more than 2,600 people, showed no signs of slowing, with 700 new cases reported in the last week with data available. Guinea, Sierra Leone and Liberia account for the vast majority of cases and deaths in the outbreak; eight people have died in Nigeria, out of 21 cases there, and Senegal has so far confirmed one diagnosis.

"The upward epidemic trend continues in the three countries that have widespread and intense transmission: Guinea, Liberia and Sierra Leone," the United Nations health agency announced. WHO officials hope to "bend the curve" in the almost exponential increase in cases within three months.

The latest numbers updated five days of data for Liberia and one for the other countries, and showed no new deaths in Sierra Leone since the previous update. In a separate Ebola outbreak in the Democratic Republic of Congo, officials had reported 40 deaths out of 71 cases by September 15, according to the WHO.

Starting Thursday at midnight (000 UTC), Sierra Leone's 6 million people must stay home, except for thousands of volunteers who will go house-to-house delivering bars of soap and information about how to prevent Ebola. Authorities have said they also expect to discover hundreds of new cases during the Friday-to-Sunday exercise. Sierra Leone's government has prepared screening and treatment centers to accept the expected influx of patients after the shutdown.

Public health experts have focused on isolating the sick and tracking down anyone who may have come into contact with them. Stopping transmission has proved crucial to defeating Ebola, but the current outbreak has ballooned out of control, leading to more stringent measures including travel restrictions, the cordoning off of entire communities and now Sierra Leone's nation-wide lockdown.

Though Ebola has no recognized treatment, doctors have tested out experimental measures in the current outbreak. For instance, some patients have received the blood of Ebola survivors, a measure some scientists think can help patients fight off the virus.

The United States plans to send 3,000 military personnel to the region and build more than a dozen treatment centers in Liberia. Major General Darryl Williams has already arrived in Monrovia to set up a command center for the operation and survey sites for the clinics, defense officials said.