Germany were looking for World Cup glory after the disappointment of 1966. First they had to overcome reigning European champs Italy. 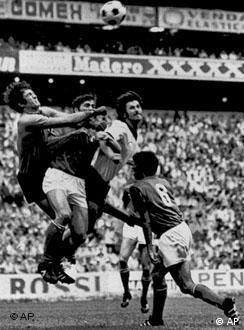 With the prize being a final against the winners of the other semi-final being played that day in Guadalajara, the two giants of European soccer once more braved the Mexican heat to do battle in what turned out to be one of the most dramatic games in World Cup history. European Champions Italy were flying while West Germany, runners-up in the previous World Cup, were fired by a desire to go one better.

Stifled by the heat in the Aztec stadium, both sides started slowly but the Italians were first to break the deadlock. In the eighth minute, Roberto Boninsegna exchanged a defense-splitting one-two with Luigi Riva before dispatching an unstoppable half-volley from 16 meters out which left Sepp Maier rooted to the spot. Inspired by their rising star, a youngster by the name of Franz Beckenbauer, and their increasingly dangerous forward Gerd 'Der Bomber' Müller, Germany fought back in cavalier style, raiding the Italian defense incessantly. But the Azzurri's rearguard held firm and it looked to be going their way until Karl Heinz Schnellinger grabbed the equalizer in injury time.

With Beckenbauer out for the extra-time period with his arm in a sling, Germany looked to give everything for victory. It looked to have paid off when Müller scored to put the Germans ahead. But their joy was short-lived. Tarcisio Burgnich headed Italy level from a free-kick before Luigi Riva ran on and regained the lead. After Müller had again hauled Germany back into the exhausting game, Gianni Rivera cancelled out Der Bomber's second strike with eight minutes to go and gave Italy a 4-3 win after two hours of soccer.