England and Germany came together in London for the final of the 1966 World Cup, creating one of the most memorable games in the tournament's history and one of the most enduring rivalries in the sport. 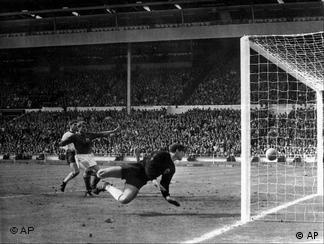 Did it or didn't it? England's third goal remains a contentious issue

The game that all England fans continue to hold up as the beacon for future success and main reason for celebration over the old rivals West Germany is one that, to this day, remains a contentious issue for the Germans. Did Geoff Hurst's second goal, scored in the 101st minute of the game to give England a 3-2 lead, really cross the line? Did the Russian linesman really award the goal as revenge for Stalingrad? Such things are immaterial now but add to the mythic status of the 1966 World Cup Final.

What should be remembered is a classic game which had everything. The two nations peppered each others goals with chances from the whistle in front of a 93,000-strong crowd at Wembley, the majority of which were silenced in the 12th minute when Helmut Haller pounced to drill a cross-shot beyond Gordon Banks to give the Germans the lead. Just six minutes late and Geoff Hurst headed England level.

The frenetic pace continued but it was only until 15 minutes from the end of the game that another goal was scored, Martin Peters seizing the loose ball and lashing it home from close range. England looked to kill Germany off but were caught themselves. In the dying seconds of the match, Wolfgang Weber slammed the ball into the roof of the net and the FIFA World Cup final went into extra time, for the first time in history.

"They think it's all over…it is now"

Gutted from the blow of having the cup snatched away, England were dejected and the Germans exhausted from their efforts to save the game. But when Hurst was awarded his controversial second goal after the ball had rattled off the cross bar, down over the line and out into play again, Germany were deflated.

With extra-time almost over, Hurst burst away from the tiring German defense, and as spectators ran onto the pitch thinking the game to be over, the England striker crashed a shot high into the net to seal a 4-2 win.