Word of the Week: Zappelphilipp

This quirky German word is for kids who just can't sit still. Does that apply to you? 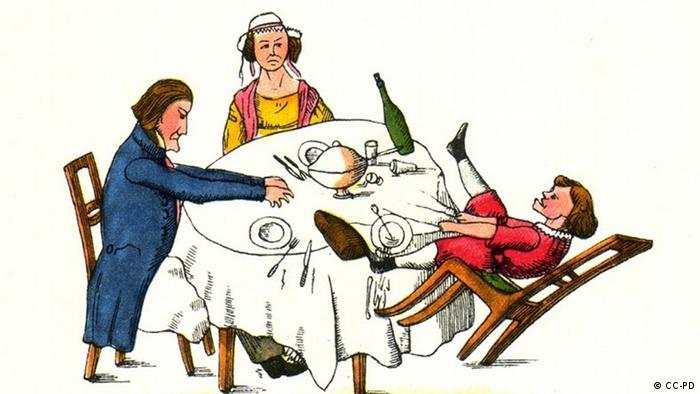 "'Let me see if Philip can / Be a little gentleman; / Let me see if he is able / To sit still for once at the table.' / Thus spoke, in earnest tone, / The father to his son; / And the mother looked very grave / To see Philip so misbehave."

So begins "Die Geschichte vom Zappelphilipp" (The Story of Fidgety Philip), written in 1845 by the German psychiatrist and writer, Heinrich Hoffmann. The rhyming story appeared in his illustrated children's book "Der Struwwelpeter" (Shockheaded Peter) and tells the tale of a boy who simply can't sit still at the dinner table. He rocks his chair back and forth, until - much to his parents' horror - he accidentally falls, dragging the table cloth, plates, food and everything else down with him onto the floor.

Zappeln is the German word for fidgeting. And although Hoffmann coined the term Zappelphilipp more than 150 years ago, the name is still used today to refer to fidgety children, whether boy or girl. A Zappelphilipp certainly doesn't have to be named Philipp. The child in question can just as well be an Anton, an Emma, a Jessica, a Sophie, a Thomas or a Nick.

Hoffmann's book contains many stories about misbehaving children who receive drastic punishments. Zappelphilipp, however, gets off fairly lightly - he just falls out of his chair. Other children in Hoffmann's work disappear - or even die.

Later studies of the Zappelphilipp story suggest Hoffmann may have been describing a child with attention deficit disorder. In German, Zappelphilipp Syndrome is also sometimes used to describe hyperactivity disorders.