Women20 Summit Berlin: No 'silver bullet' for gender equality in 2017

On the first day of the Women20 summit in Berlin, Chancellor Angela Merkel was joined by high-ranking women, Ivanka Trump and Christine Lagarde, to discuss the importance of scaling up global female entrepreneurship. 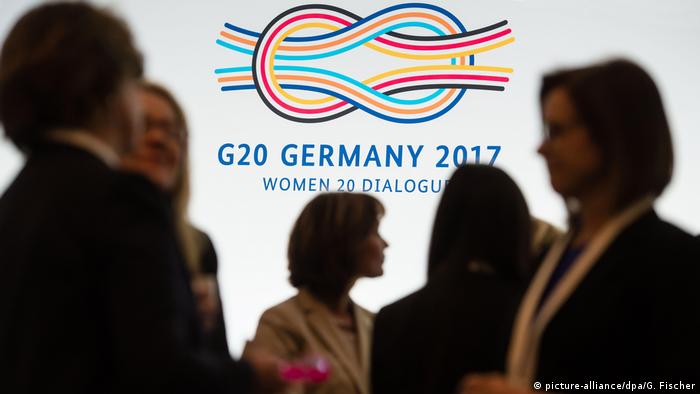 Women from all fields descended on the G20 meeting in Berlin

Of the four key pillars on the agenda at this,  the third W20 summit, one is labor market inclusion, which sets out the importance of increasing the value of work traditionally done by women and ensuring a more gender equal distribution of employment opportunities.

The most high-profile session of the first day was held under the title "Inspiring women: Scaling up Women's Entrepreneurship." The panel featured Queen Máxima of the Netherlands, Chancellor Angela Merkel, Christine Lagarde, Managing Director of the IMF and Ivanka Trump, First Daughter of the US President.

The first to speak was Queen Máxima, who is also the honorary chairwoman of the G20 global partnership for financial inclusion. She said that there is no "silver bullet" or "size fits all" for the economic empowerment of women.

Queen Maxima added that factoring in all of those disparate parts and finding solutions requires "a concerted effort of many interventions." 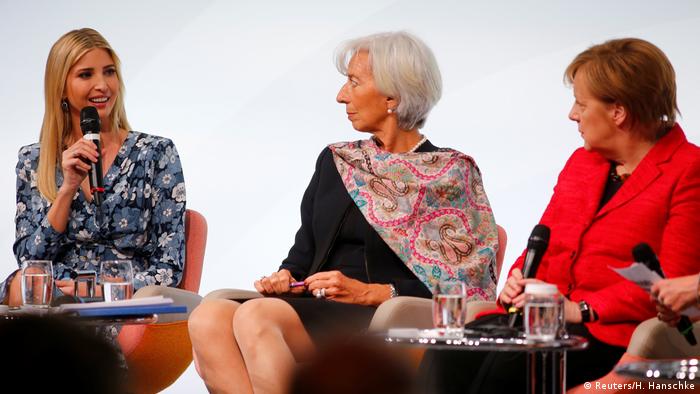 On a similar note, Germany's Federal Chancellor Angela Merkel said it is not only time to close the employment gap, but to empower women to tap into their entrepreneurial spirit.

"Everywhere in development policy, we are asking how do we move from state development to economic development," Merkel said. The chancellor explained that Germany was planning to ask other G20 countries to contribute to a start-up capital pot that would be distributed by the World Bank to women keen to set up their own business.

The suggestion was welcomed by Juliana Rotich, co-founder of the Kenyan hardware and services technology company, BRCK Inc.

"I think that would be a really great first step," she said. Rotich pointed out that the implementation includes and compliments what is already being done in the area of financial inclusion. "I hope some of that fund could be provided for the support of innovation and technology, because that can help to accelerate the inclusion of women and help lift them out of poverty."

Rotich also took the opportunity to debunk the idea that African women are not part of the solution. "Include us as we think through the solutions." 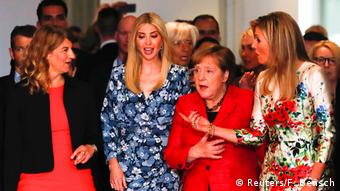 Equality is a "no-brainer"

The debate in Berlin continued along the theme of how to get more women into the workplace and which roles lie within it. Head of the IMF, Christine Lagarde, described inclusion as an economic no-brainer.

"They boost growth, and everyone wants growth and wants jobs," she said."If you were to close the gender gap,the US economy would automatically grow by 5 percent and in India, you are talking about 23 percent. So in all societies, there is a bonus to be had by having women join the economy."

By the same token, she said that lower levels of inequality led to more sustainable growth and a more diversified economy. "It is critically important to get women to the table. Why don't they come? I think we have to do something about that, and that is the exciting part."

It is time, she added, for women to not only be active, but become activists.

When Ivanka Trump was handed the microphone, the conversation took a slightly different turn. Rather than being asked about her views on financial inclusion, she was asked about her father's approach to women.

"I've heard the criticism from the media," she said, pointing to the thousands of women who have worked with and for him when he was in the private sector. "As a daughter, I can speak knowing that he encouraged me and enabled me to thrive. Beyond my own perseverance and tenacity."

With that out of the way, Trump thanked Merkel for her invitation and said she was humbled to be among her fellow panelists and to be discussing the subject at hand. "I care very much about empowering women in the workplace," she said. "I will be coming out of this trip all the more informed."

Though Trump may be the newest to her particular role, it is clear from the debate that veered from financial inclusion to digital involvement, to climate change, women in positions of power, and the never-ending issue of how to balance family with a career, that everyone has a lot of learning to do. And that summits like this are valid in the effort to push the multi-faceted issue further towards the center of the table.

Ireland's politicians have asked a panel of 99 citizens to examine one of its most contentious topics: abortion. But not everyone relishes the idea. Gavan Reilly reports from Dublin. (26.01.2017)